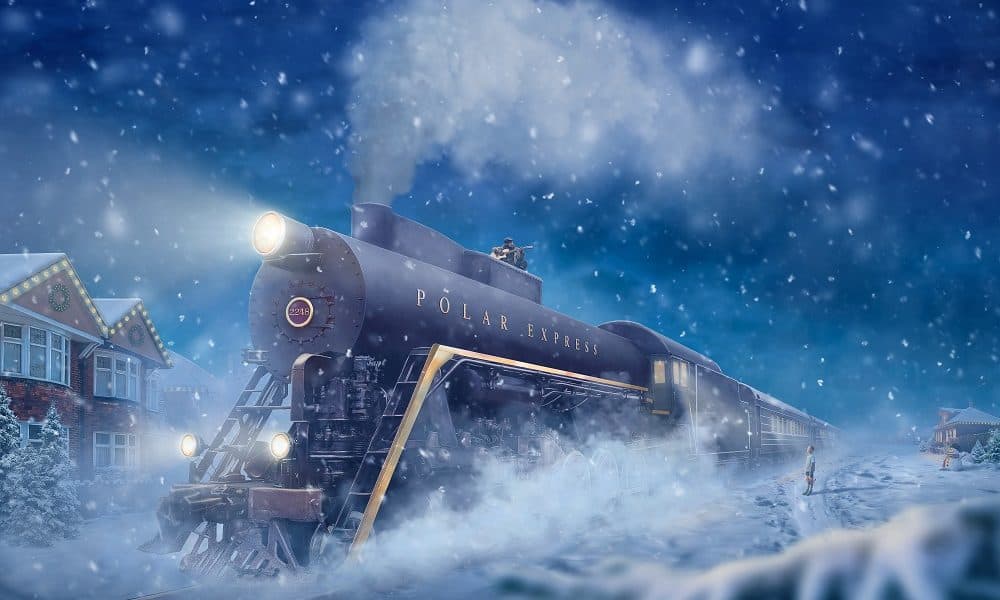 These Polar Express quotes from the movie and the book will make you believe in the magic of Christmas all over again.

Did You Grow Up Reading The Polar Express As A Kid?

It was a Christmas tradition in my family that on at least one December night before Christmas, my sister and I would cuddle up against my mom as she read from this gorgeous picture book about a little boy who took a train to the North Pole. It was an enchanting book about the magic of Christmas and I always hoped that one day, the Polar Express would pull up outside my window and take me to see Santa.

Alas, that never happened. But, Warner Bros. did release a charming movie in 2004 based on the same children’s book and starring Tom Hanks.

We hope you enjoy our compilation of Polar Express quotes.

Don’t forget to also check out these

2. “Seeing Is Believing, But, Sometimes, The Most Real Things In The World Are The Things We Can’t See.” — The Conductor

3. “At one time most of my friends could hear the bell. But as years passed, it fell silent for all of them. Even Sarah found, one Christmas, that she could no longer hear its sweet sound. Though I’ve grown old, the bell still rings for me…as it does for all who truly believe.” — Chris

6. “Why, To The North Pole, Of Course! This Is The Polar Express!” — The Conductor

Polar Express quotes about the magic of Christmas

12. “Just Remember, The True Spirit Of Christmas Lies In Your Heart.” — Santa

14. “This bell is a wonderful symbol of the spirit of Christmas, as am I.” — Santa

15. “They are gathering at the center of the city . . . That is where Santa will give the first gift of Christmas.” — The Conductor

17. “This is the most beautiful-est, most wonderful-est Christmas ever.” — Sarah

19. “On Christmas Eve many years ago I laid quietly in my bed. I did not rustle the sheets, I breathed slowly and silently. I was listening for a sound I was afraid I’d never hear: the sound of Santa’s sleigh bells.” — Chris

20. “Outside, the lights of towns and villages flickered in the distance as the Polar Express raced northward.” — Chris Van Allsburg

21. “The North Pole. It was a huge city standing alone at the top of the world, filled with factories where every Christmas toy was made.” — Chris Van Allsburg

22. “We climbed mountains so high it seemed as if we would scrape the moon. But the Polar Express never slowed down. Faster and faster we ran along . . .” — Chris Van Allsburg

23. “There is no Santa,” my friend had insisted, but I knew he was wrong.” — Chris Van Allsburg

24. “Santa shouted out the reindeer’s names and cracked his whip. His team charged forward and climbed into the air.” — Chris Van Allsburg

26. “What I wanted more than anything was one silver bell from Santa’s sleigh.” — Chris Van Allsburg

27. “Santa circled once above us, then disappeared in the cold, dark polar sky.” — Chris Van Allsburg

28. “The Thing About Trains… It Doesn’t Matter Where They’re Going. What Matters Is Deciding To Get On.” — The Conductor

29. “A number-seven bow? When we’re this close to liftoff? What are they thinking down there? Are they meshuggener?” — Elf General

31. “Found this on the seat of my sleigh. Better fix that hole in your pocket.” — Santa

35. “Show your tickets. Have your tickets ready. Remember to eat the five basic food groups.” — The Conductor

Do you still believe?

The Polar Express follows the journey of a young boy named Chris (known generally as Hero-Boy) who isn’t sure if he believes in Santa anymore. On his journey to the North Pole, he learns a valuable lesson about what it means to believe. He also learns that the magic of Christmas is kept in one’s heart. And so, after his adventure, he continues to believe in the spirit of Christmas long after all others in his life have forgotten.

The rest of us aren’t so lucky as to be carried away by the Polar Express when we have doubts about what we believe in. But, as the conductor says, “Some of the most real things in the world, we cannot see.” Sometimes, faith alone must be enough.

Did you enjoy these Polar Express quotes and lines? Which quote was your favorite? Let us know in the comments below.