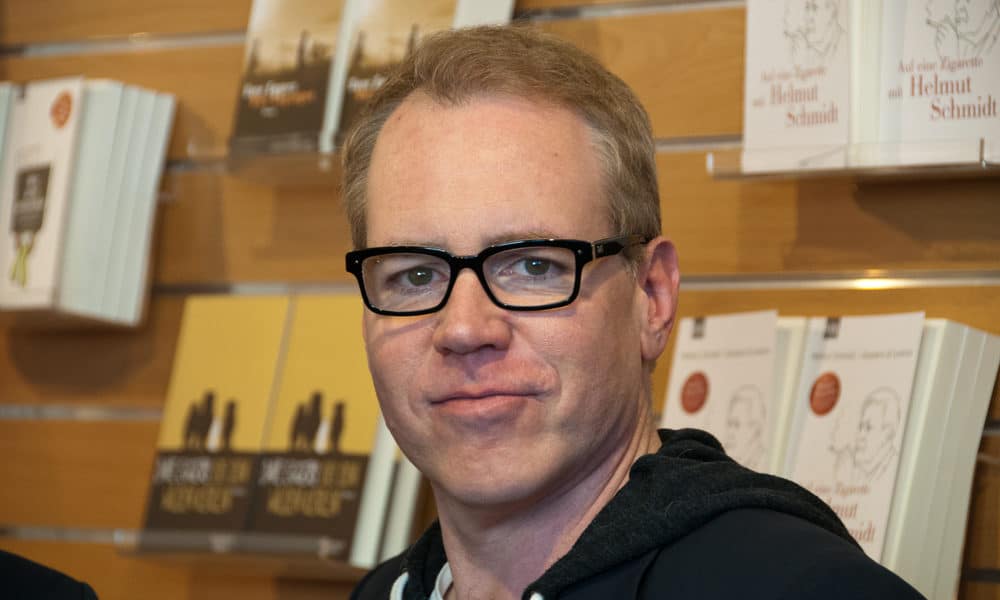 Is the movie American Psycho really based on a novel? The answer is yes, and not just any novel, but one of the most banned books of all time! If you have read the 1991 novel or seen the movie, which stars Christian Bale, then you might understand why.

In Germany, they deemed the book “harmful to minors.” It also had many sales restrictions placed on it between 1995-2000. In Australia, they do not sell the book to anyone under the age of 18 and must be shrink-wrapped!

The movie was released in 2000 and has a mix of reviews. Some critics hated it, some loved it, and the same could be said of fans. People either thought it was a terrible misogynistic, violent, and anti-feminist film. Others find it a work of genius, and it has quite the cult following. Just what is it about the film that people take issue with?

When you get to the section with inappropriate (violent and sexual) American Psycho quotes you might understand. The plot, character development, and twist make for a great story that leaves you wondering what just happened.

However, it seems wrong to glorify a mentally ill serial killer who clearly hates women and appears to be going insane because of the capitalistic nature of his life. Keep reading to learn some interesting facts about the movie.

Don’t forget to also check out these The Silence of the Lambs quotes that will give you goosebumps.

2. “Duct tape. I need it for… taping something.” ― Patrick Bateman

3. “My need to engage in homicidal behavior on a massive scale cannot be corrected, but, ah, I have no other way to fulfill my needs.” ― Patrick Bateman

5. “You’re my lawyer, so I think you should know: I’ve killed a lot of people. Some girls in the apartment uptown uh, some homeless people maybe 5 or 10 um an NYU girl I met in Central Park. I left her in a parking lot behind some donut shop. I killed Bethany, my old girlfriend, with a nail gun, and some man uh, some old faggot with a dog last week. I killed another girl with a chainsaw, I had to, she almost got away and uh someone else there, I can’t remember maybe a model, but she’s dead too. I killed Paul Allen with an axe in the face. His body is dissolving in a bathtub in Hell’s Kitchen. I don’t want to leave anything out here. I guess I’ve killed maybe 20 people, maybe 40. I have tapes of a lot of it, uh, some of the girls have seen the tapes. I even, um… I ate some of their brains, and I tried to cook a little.” ― Patrick Bateman

6. “Tonight I, uh, I just had to kill a LOT of people. And I’m not sure I’m gonna get away with it this time. So, if you get back tomorrow, I may show up at Harry’s Bar, so you know, keep your eyes open.” ― Patrick Bateman

7. “I like to dissect girls. Did you know I’m utterly insane?” ― Patrick Bateman

8. “You’re a fucking ugly bitch. I want to stab you to death and then play around with your blood.” ― Patrick Bateman

9. Patrick Bateman: “Do you know what Ed Gein said about women?”

Patrick Bateman: “No, serial killer, Wisconsin in the fifties.”

10. “Did you know that Ted Bundy’s first dog was a collie named Lassie?” ― Patrick Bateman

11. “I have all the characteristics of a human being: blood, flesh, skin, hair; but not a single, clear, identifiable emotion, except for greed and disgust. Something horrible is happening inside of me and I don’t know why. My nightly bloodlust has overflown into my days. I feel lethal, on the verge of frenzy. I think my mask of sanity is about to slip.” ― Patrick Bateman

13. “The only girls with good personalities who are smart or maybe funny or halfway intelligent or talented, though god knows what the f*ck that means, are ugly chicks.” ― Craig McDermott

15. “Well, he was probably a closet homosexual who did a lot of cocaine. That whole Yale thing.” ― Patrick Bateman

16. Bateman: “When I see a pretty girl walking down the street, I think two things. One part of me wants to take her out and talk to her and be real nice and sweet and treat her right.”

Craig McDermott: “And what did the other part think?”

Patrick Bateman: “What her head would look like on a stick.”

Timothy Bryce: “Fuck you! Calm down. Let’s do it, anyway. That is if the FAGGOT in the next stall thinks it’s okay!”

18. “People should always try to look their best because someone will always be thinner and better looking.” ― Patrick Bateman

19. “Paul Allen has mistaken me for this dickhead Marcus Halberstram. It seems logical because Marcus also works at P&P and in fact, does the same exact thing I do and he also has a penchant for Valentino suits and Oliver Peoples glasses. Marcus and I even go to the same barber, although I have a slightly better haircut.” ― Patrick Bateman

20. “I don’t want you to get drunk, but that’s a very expensive glass of Chardonnay you’re NOT drinking there. It isn’t poisoned.” ― Patrick Bateman

21. “Do you like Huey Lewis and the News?” ― Patrick Bateman

23. “Just cool it with the anti-Semitic remarks.” ― Patrick Bateman

25. “Listen, the mud soup and the charcoal arugula are outrageous here.” ― Patrick Bateman

28. “I need to return some videotapes.” ― Patrick Bateman

32. “It doesn’t matter because I can’t control the feeling, anyway.” ― Patrick Bateman

American Psycho quotes from the rest of the cast

34. “Oh, my God. Bateman, do you want me to fry you up some fucking potato pancakes? Some latkes?” ― Craig McDermott

36. “Then maybe we shouldn’t go out to dinner. I wouldn’t want you to lose your willpower.” ― Jean

41. “If they have a great personality and they’re not great looking… then who f*cking cares?” ― Craig McDermott

42. “There are no girls with good personalities.” ― David Van Patten

43. “Hi, this is Paul Allen. I’m being called away to London for a few days. Meredith, I’ll call you when I get back. Hasta la vista, baby.” ― Patrick Bateman

44. “I’m on the verge of tears by the time we arrive at Espace since I’m positive we won’t have a decent table. But we do, and relief washes over me in an awesome wave.” ― Patrick Bateman

45. “Their early work was a little too new wave for my tastes, but when Sports came out in ’83, I think they really came into their own, commercially and artistically. The whole album has a clear, crisp sound, and a new sheen of consummate professionalism that really gives the songs a big boost. He’s been compared to Elvis Costello, but I think Huey has a far more bitter, cynical sense of humor.” ― Patrick Bateman

46. “There is an idea of a Patrick Bateman, some kind of abstraction, but there is no real me, only an entity, something illusory. Although I can hide my cold gaze, and you can shake my hand a feel flesh gripping yours, and even sense our lifestyles are probably comparable, I simply am not there.” ― Patrick Bateman

47. Donald Kimball: “Do you remember where you were the night of Paul’s disappearance, which was on the 20th of December?”

Patrick Bateman: “God… I guess I was probably returning videotapes.”

48. “When I get to Paul Allen’s place, I use the keys I took from his pocket. There is a moment of sheer panic when I realize that Paul’s apartment overlooks the park and is obviously more expensive than mine. I calm myself and move into the bedroom where I find his suitcase and start to pack.” ― Patrick Bateman

49. “I’m trying to listen to the new Robert Palmer tape but Evelyn, my supposed fiance’ keeps buzzing in my ear.” ― Patrick Bateman

50. “There is no way to empathize with others in the world we live in today. It’s always easier to feel empathy for ourselves instead of others.” ― Patrick Bateman

Which of these American Psycho quotes is your favorite?

Christian Bale does a masterful job at playing Patrick Bateman, the titular character in American Psycho. Bateman is suffering from a psychotic personality disorder and demonstrates many qualities of schizophrenia.

Did you know though, at one point Lionsgate replaced the director and Bale? They brought on a new director, and the world almost got to know Patrick Bateman through Leonardo DiCaprio. When DiCaprio left American Psycho to film The Beaches, the studio brought back the original director and Bateman.

The theme of the book and the movie revolves around how capitalistic and materialistic people have become. Literary critic Jeffrey W. Hunter claims American Psycho is largely a critique of the “shallow and vicious aspects of capitalism.”

What did you think of the book or the movie? Do you think the book deserved to be banned? Do you believe, like the author of the book Bret Easton Ellis, that the movie “didn’t need to be made?” Share your thoughts in the comment section below, along with any other favorite American Psycho quotes and lines.