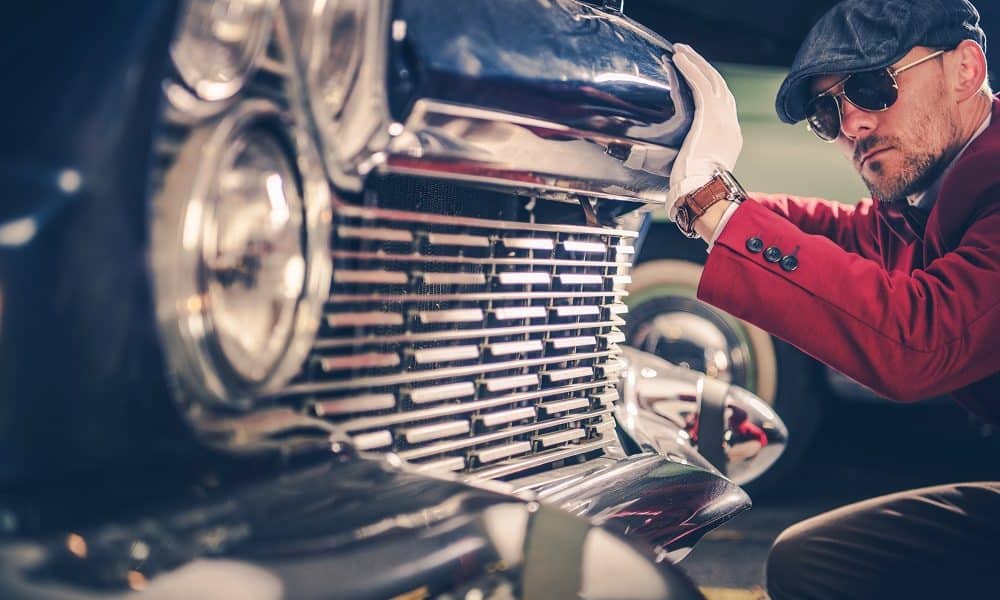 If you can’t get enough of cars, from owning them to looking at them, these car quotes are for you.

For some people, a car is simply a means of transportation. It’s a way to move from one place to another faster than you could on a foot or a bike or a horse.

However, there are also people who can’t get enough of cars. They want to look at them, study them, talk about them and own as many as they can. There might be a favorite model that they love or they may like them all.

If that describes you, you’re sure to enjoy these car quotes. Keep reading!

Don’t forget to also check out these motorcycle quotes that will make you want to hit the open road.

2. “When it comes to cars, only two varieties of people are possible – cowards and fools.” – Russell Baker

4. “I’ve always been into cars. Cars are part of our genetic makeup. It’s unavoidable.” – Matthew Fox

5. “I thought cars were essential ingredients of life itself.” – Edward Herrmann

8. “Cars are the reason we, you know, people live or die.” – Steven Curtis Chapman

9. “All human males were as fascinated with cars as they were with breasts.” – Anita Clenney

11. “The way I drive, the way I handle a car, is an expression of my inner feelings.” – Lewis Hamilton

13. “One person’s car is another person’s scenery.” – Jonathan I’ve

14. “Automobiles have always been part of my life, and I’m sure they always will be. What is it about them that moves me? The sound of a great engine, the unity and uniqueness of an automobile’s engineering and coachwork, the history of the company and the car, and, of course, the sheer beauty of the thing.” – Edward Herrmann

16. “I know a lot about cars, man. I can look at any car’s headlights and tell you exactly which way it’s coming.” – Mitch Hedberg

Car Quotes About Advancement and Discoveries

17. “Self-driving cars are the natural extension of active safety and obviously something we should do.” – Elon Musk

19. “Electric cars are not going to take the market by storm, but it’s going to be a gradual improvement.” – Carlos Ghosn

20. “Electric cars aren’t pollution-free; they have to get their energy from somewhere.” – Alexandra Paul

21. “Generally, cars were not built to sit on dealer lots. It encourages the wrong kind of behavior in the whole system.” – Rick Wagoner

22. “I couldn’t find the sports car of my dreams, so I built it myself.” – Ferdinand Porsche

23. “Flying cars are not a very efficient way to move things from one point to another.” – Bill Gates

25. “We at BMW do not build cars as consumer objects, just to drive from A to B. We build mobile works of art.” – Chris Bangle

26. “I really do encourage other manufacturers to bring electric cars to market. It’s a good thing, and they need to bring it to market and keep iterating and improving and make better and better electric cars, and that’s what going to result in humanity achieving a sustainable transport future. I wish it was growing faster than it is.” – Elon Musk

Car Quotes About Racing and Competition

27. “A racing car is an animal with a thousand adjustments.” – Mario Andretti

28. “Race cars, no matter what size or shape they are, they do the same things. It is not complicated.” – Tony Stewart

30. “Race cars are neither beautiful nor ugly. They become beautiful when they win.” – Enzo Ferrari

32. “Fast cars like Porsches and Ferraris – they are things of beauty.” – Rod Stewart

34. “You’re safer in the race car than you are in cars going to and from the track.” – Mario Andretti

Car Quotes About Happiness and Emotions

36. “You can know or not know how a car runs and still enjoy riding in a car.” – David Byrne

37. “I am emotional about engines, if you hurt my car, you hurt my heart.” – Amit Kalantri

38. “Money may not buy happiness, but I’d rather cry in a Jaguar than on a bus.” – Françoise Sagan

39. “A dream without ambition is like a car without gas… you’re not going anywhere.” – Sean Hampton

Car Quotes About Human and Society

42. “There’s no way we could take cars off the planet and not have our society fall apart. So they’re a necessary evil, in that sense.” – Lindsay Wagner

43. “All of those cars were once just a dream in somebody’s head.” – Peter Gabriel

44. “The car has become the carapace, the protective and aggressive shell, of urban and suburban man.” – Marshall McLuhan

45. “The best car safety device is a rear-view mirror with a cop in it.” – Dudley Moore

47. “Consumers do not want a perceived cheap car; they want a car to flaunt. A car is as much about status and identity as it is about transport.” – Jens Martin Skibsted

48. “If you think nobody cares if you’re alive, try missing a couple of car payments.” – Earl Wilson

49. “It’s like driving your car. If you drive too fast on the highway, you will topple, so you better maintain your speed. Life is similar to that, and that’s the way you have to control your head.” – A. R. Rahman

50. “When you have a great car, you want people to see the car.” – Andris Nelsons

What did you learn from these car quotes?

The first car was invented back in 1886 and they haven’t stopped changing and adapting from that moment on. Car companies learned how to get faster at making them so they could produce them for less money and for more people.

They moved from all looking pretty much the same to having very different appearances. We can now choose from vintage cars, used cars, or new ones. There are cars, trucks, vans, and SUVs. And we can choose to make them any color that we want.

You may have a bigger appreciation for vintage cars or the old muscle cars or you may love to see what the new adaptions are coming out each year. Whatever side you fall on, there’s something about a love for cars that can bond people together.

What’s your biggest takeaway from these car quotes and sayings? Do you have any other favorite quotes to add? Let us know in the comment section below.