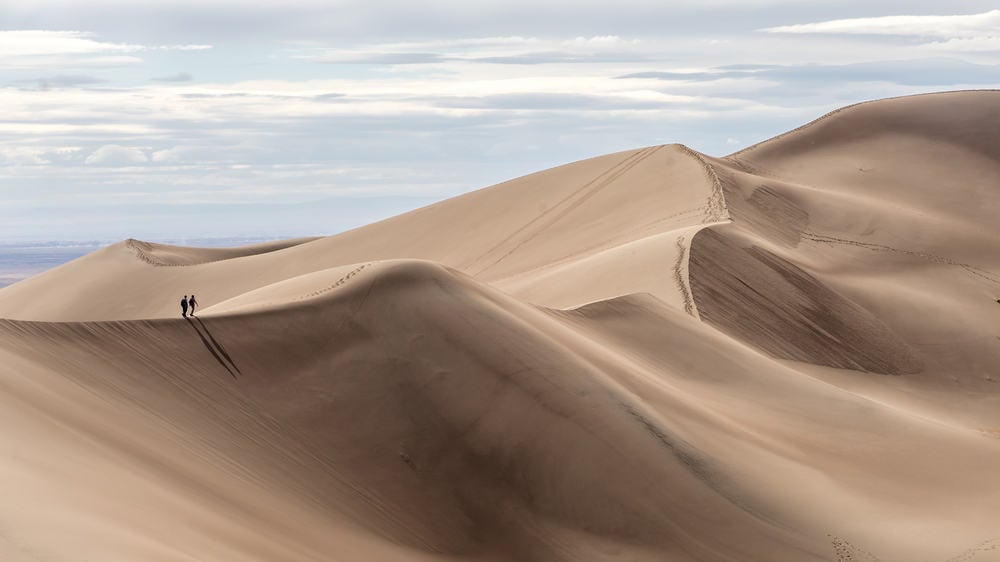 Dune may be the greatest science-fiction novel ever written, and without it, many of our beloved sci-fi stories may never have existed. Here are 50 Dune quotes from the classic novel.

Frank Herbert was a freelance writer, who, in 1959, was commissioned to write an article by the US Department of Agriculture that led him to research sand dunes. Little did Herbert know at the time that this research would soon inspire a science-fiction novel that would change the genre forever.

Dune is set far into the future, after the discovery of interstellar travel, and warring noble houses are controlled by a fierce galactic emperor. Originally published as two parts in a science-fiction magazine, Herbert later reworked his story to become a single 400-page epic. The novel would go on to inspire other sci-fi classics like Star Wars, Stargate, and Mad Max.

1. “Polish comes from the cities; wisdom from the desert.” — Frank Herbert

2. “When one has lived with prophecy for so long, the moment of revelation is a shock.” — Frank Herbert

3. “We make our own justice. We make it here on Arrakis—win or die.” — Frank Herbert

4. “My duty is the strength of the tribe.” — Frank Herbert

6. “A process cannot be understood by stopping it. Understanding must move with the flow of the process, must join it and flow with it.” — Frank Herbert

7. “The proximity of a desirable thing tempts one to overindulgence. On that path lies danger.” — Frank Herbert

8. “The whole theory of warfare is calculated risk.” — Frank Herbert

9. “Anything outside yourself, this you can see and apply your logic to it. But it’s a human trait that when we encounter personal problems, these things most deeply personal are the most difficult to bring out for our logic to scan. We tend to flounder around, blaming everything but the actual, deep-seated thing that’s really chewing on us.” — Frank Herbert

10. “If you rely only on your eyes, your other senses weaken.” — Frank Herbert

11. “A stone is heavy and the sand is weighty, but a fools wrath is heavier than them both.” — Frank Herbert

13. “Nothing about religion is simple.” — Frank Herbert

14. “When religion and politics travel in the same cart, the riders believe nothing can stand in their way. Their movements become headlong—faster and faster and faster. They put aside all thoughts of obstacles and forget the precipice does not show itself to the man in a blind rush until it’s too late.” — Frank Herbert

15. “There should be a science of discontent. People need hard times to develop psychic muscles.” — Frank Herbert

16. “Respect for the truth comes close to being the basis for all morality.” — Frank Herbert

17. “What do you despise? By this are you truly known.” — Frank Herbert

18. “No more terrible disaster could befall your people than for them to fall into the hands of a Hero.” — Frank Herbert

19. “To save one from a mistake is a gift of paradise.” — Frank Herbert

21. “There should be a word for memories that deny themselves.” — Frank Herbert

23. “The willow submits to the wind and prospers until one day it is many willows—a wall against the wind. This is the willow’s purpose.” — Frank Herbert

24. “Given the right lever, you can move a planet.” — Frank Herbert

25. “Speak only of possibilities.” — Frank Herbert

26. “A beginning is the time for taking the most delicate care that the balances are correct.” — Frank Herbert

27. “What has mood to do with it? You fight when the necessity arises—no matter the mood! Mood’s a thing for cattle or making love or playing the baliset. It’s not for fighting.” — Frank Herbert

28. “Teaching is one thing. The basic ingredient is another.” — Frank Herbert

29. “It is so shocking to find out how many people do not believe that they can learn, and how many more believe learning to be difficult.” — Frank Herbert

30. “That which submits rules.” — Frank Herbert

31. “Any road followed precisely to its end leads precisely nowhere. Climb the mountain just a little bit to test that it’s a mountain. From the top of the mountain, you cannot see the mountain.” — Frank Herbert

33. “The person who experiences greatness must have a feeling for the myth he is in.” — Frank Herbert

34. “Growth is limited by the necessity which is present in the least amount. And naturally, the least favorable condition controls the growth rate.” — Frank Herbert

35. “There is no escape—we pay for the violence of our ancestors.” — Frank Herbert

38. “The eye that looks ahead to the safe course is closed forever.” — Frank Herbert

39. “I must not fear. Fear is the mind-killer. Fear is the little-death that brings total obliteration. I will face my fear. I will permit it to pass over me and through me. And when it has gone past I will turn the inner eye to see its path. Where the fear has gone there will be nothing. Only I will remain.” — Frank Herbert

40. “You’ve heard of animals chewing off a leg to escape a trap? There’s an animal kind of trick. A human would remain in the trap, endure the pain, feigning death that he might kill the trapper and remove the threat to his kind.” — Frank Herbert

41. “Once men turned their thinking over to machines in the hope that this would set them free. But that only permitted other men with machines to enslave them.” — Frank Herbert

42. “Thou shalt not make a machine in the likeness of a man’s mind.” — Frank Herbert

44. “There is probably no more terrible instant of enlightenment than the one in which you discover your father is a man—with human flesh.” — Frank Herbert

45. “Guilt starts as a feeling of failure.” — Frank Herbert

46. “To accept a little death is worse than death itself.” — Frank Herbert

48. “How little the universe knows about the nature of real cruelty!” — Frank Herbert

49. “The concept of progress acts as a protective mechanism to shield us from the terrors of the future.” — Frank Herbert

50. “Deep in the human unconscious is a pervasive need for a logical universe that makes sense, But the real universe is always one step beyond logic.” — Frank Herbert

Which Dune quote is your favorite?

Dune heavily influenced the genre of science fiction, but it was not an immediate success. The completed novel was more than 400 pages at a time when science fiction readers were only reading short stories and novellas. Dune was rejected by more than 20 publishers before finally being accepted by Chilton.

The novel won the Nebula and Hugo awards in the 1960s, but it took more time to convince readers. Slowly, through the 1960s and ‘70s, Herbert began to accumulate a fan base until, now, more than 55 years later, it is considered the greatest, most influential science-fiction novel of all time.

Did you enjoy these Dune quotes and lines? Let us know in the comments below.