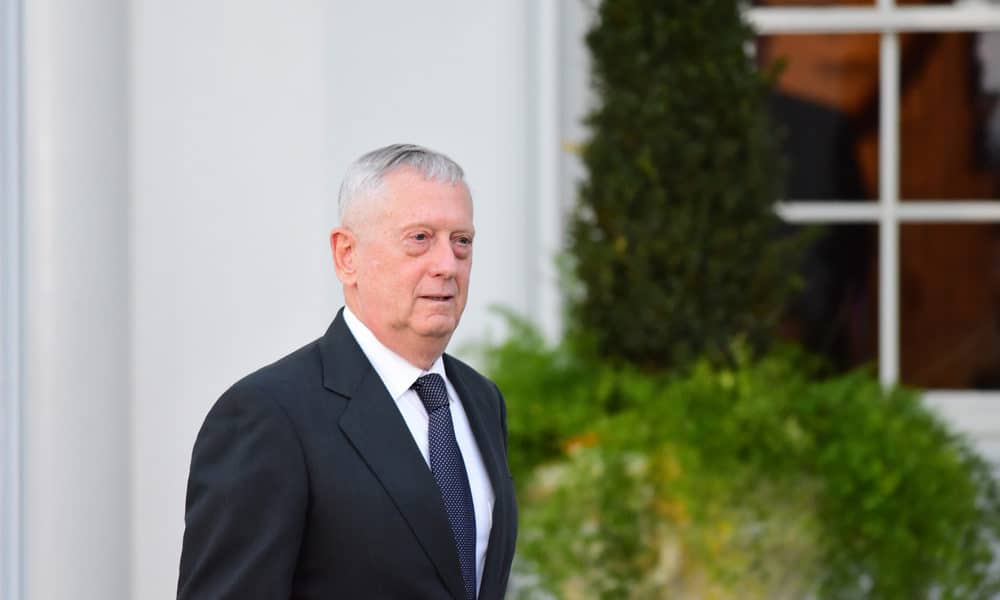 Our latest collection of general James Mattis quotes on leadership, teamwork, and the military. Enjoy!

Four-Star General James Mattis served 44 years in the US Marine Corps and commanded forces in the Persian Gulf War, the War in Afghanistan, and the Iraq War. James Mattis was known for being an intellectual who hastened up the ranks. He spent his time studying military and world history.

At one point, it was said he had a personal library that comprised over 7,000 volumes. Marines under his command were given a reading list which consisted of works about the culture and history of regions where they were deployed.

These James Mattis quotes show his penchant for acquiring knowledge about leadership. He is not a total book worm though and has a lot to say about fighting too! This ruthless attitude led to speculation that his nickname was “Mad Dog,” however he stated his actual call sign was CHAOS. The acronym stood for “Colonel Has Another Outstanding Suggestion.”

Don’t forget to also check out these General Patton quotes from one of the most successful generals.

1. “If you haven’t read hundreds of books, learning from others who went before you, you are functionally illiterate—you can’t coach and you can’t lead.” — James Mattis

2. “If you can’t be additive as a leader, you’re just like a potted plant in the corner of a hotel lobby: you look pretty, but you’re not adding substance to the organization’s mission.” — James Mattis

3. “Be the hunter, not the hunted: Never allow your unit to be caught with its guard down.” — James Mattis

4. “An untrained or uneducated Marine… deployed to the combat zone is a bigger threat to mission accomplishment… than the enemy.” — James Mattis

5. “Keep faith in your comrades on your left and right and Marine Air overhead.” — James Mattis

6. “The military is all about teamwork.” — James Mattis

7. “Everyone enters the military at junior rank and rises according to merit. Our legacy of teamwork is rich in precedents.” — James Mattis

8. “You cannot allow any of your people to avoid the brutal facts. If they start living in a dream world, it’s going to be bad.” — James Mattis

9. “You can overcome wrong technology. Your people have the initiative, they see the problem, no big deal… you can’t overcome bad culture. You’ve gotta change whoever is in charge.” — James Mattis

10. “If you cannot create harmony – even vicious harmony – on the battlefield based on trust across service lines, across coalition and national lines, and across civilian/military lines, you need to go home, because your leadership is obsolete.” — James Mattis

11. “I set out to ingrain in every grunt an aggressive spirit and confidence in winning.” — James Mattis

12. “If in order to kill the enemy, you have to kill an innocent, don’t take the shot. Don’t create more enemies than you take out by some immoral act.” — James Mattis

13. “The first time you blow someone away is not an insignificant event. That said, there are some assholes in the world that just need to be shot.” — James Mattis

14. “I come in peace; I didn’t bring artillery. But I’m pleading with you, with tears in my eyes: If you fuck with me, I’ll kill you all.” — James Mattis

15. “Actually, it’s quite fun to fight them, you know. It’s a hell of a hoot. It’s fun to shoot some people. I’ll be right up there with you. I like brawling.” — James Mattis

16. “In a country with millions of people and cars going everywhere, the enemy is going to get a car bomb out there once in a while.” — James Mattis

17. “While we will move swiftly and aggressively against those who resist, we will treat all others with decency, demonstrating chivalry and soldierly compassion for people who have endured a lifetime under Saddam’s oppression.” — James Mattis

18. “There is nothing better than getting shot at and missed. It’s really great.” — James Mattis

19. “I have the forces to squash the Iran military if I need to, but I’ve seen a lot of war and really don’t want to kill young Iranian boys.” — James Mattis

20. “Today’s violent assault on our Capitol, an effort to subjugate American democracy by mob rule, was fomented by Mr. Trump. His use of the Presidency to destroy trust in our election and to poison our respect for fellow citizens has been enabled by pseudo-political leaders whose names will live in infamy as profiles in cowardice.” — James Mattis

21. “Be polite, be professional, but have a plan to kill everybody you meet.” — James Mattis

22. “I don’t lose any sleep at night over potential for failure. I cannot even spell the word.” — James Mattis

24. “The most important 6 inches on the battlefield is between your ears.” — James Mattis

27. “There is only one ‘retirement plan’ for terrorists.” — James Mattis

28. “There are going to be good days and bad days. Bottom line.” — James Mattis

29. “I get a lot of credit these days for things I never did.” — James Mattis

30. “Engage your brain before you engage your weapon.” — James Mattis

31. “You are part of the world’s most feared and trusted force.” — James Mattis

33. “There are hunters, and there are victims. By your discipline, you will decide if you are a hunter or a victim.” — James Mattis

34. “There are some people who think you have to hate them in order to shoot them. I don’t think you do. It’s just business.” — James Mattis

35. “A country that armed Stalin to defeat Hitler can certainly work alongside enemies of Al Qaeda to defeat Al Qaeda.” — James Mattis

36. “Treachery has long existed as long as there’s been warfare, and there’s always been a few people that you couldn’t trust.” — James Mattis

37. “You are part of the world’s most feared and trusted force. Engage your brain before you engage your weapon.” — James Mattis

38. “I think the rewards for moral courage are promotion. … Any institution gets the behavior it rewards.” — James Mattis

39. “Fight with a happy heart and a strong spirit.” — James Mattis

40. “History lights the often dark path ahead; even if it’s a dim light, it’s better than none.” — James Mattis

41. “Carry out your mission and keep your honor clean.” — James Mattis

42. “When you go into battle, you enter a different world.” — James Mattis

43. “Ultimately, a real understanding of history means that we face NOTHING new under the sun.” — James Mattis

James Mattis quotes about the Marines and war

44. “Carry out your mission and keep your honor clean. Demonstrate to the world there is ‘No better friend – no worse enemy’ than a US Marine.” — James Mattis

45. “No Marine is ever alone — he carries with him the spirit passed down from generations before him. Group spirit — that electric force field of emotion — infuses and binds warriors together.” — James Mattis

46. “I feel sorry for every son of a bitch that doesn’t get to serve with you.” — James Mattis

47. “No war is over until the enemy says it’s over. We may think it over, we may declare it over, but in fact, the enemy gets a vote.” — James Mattis

48. “You’ve been told that you’re broken. That you’re damaged goods… there is also Post-Traumatic Growth. You come back from war stronger and more sure of who you are.” — James Mattis

49. “I don’t get intelligence off a satellite. Iraqis tell me who the enemy is.” — James Mattis

50. “Find the enemy that wants to end this experiment (in American democracy) and kill every one of them until they’re so sick of the killing that they leave us and our freedoms intact.” — James Mattis

What did you learn from these James Mattis quotes?

General Mattis clearly has a firm opinion on killing and defending American democracy by any means necessary. He has dedicated his entire life to the cause. In fact, he has never been married and has no children. The one woman he proposed to called off their wedding just a few days prior to the event because she felt like she would be a burden to his career.

He continued to serve the United States after retiring from military service in various capacities. Mattis sat on the advisory board of Spirit of America, a nonprofit organization that helps support the safety and success of American service personnel and the people they aim to help.

He was also the Secretary of Defense from 2017 to 2019. He resigned after he could not convince President Trump that withdrawing from Syria was the right call for the moment. In his letter, he stated Trump had “the right to have a Secretary of Defense whose views are better aligned with his, on these and other subjects.”

He joined all the other living Secretaries of Defense to pen a letter denouncing the events at the Capitol Building on January 6th, 2020. Leave your thoughts, or any other Jim Mattis quotes and sayings you like, in the comment section below.