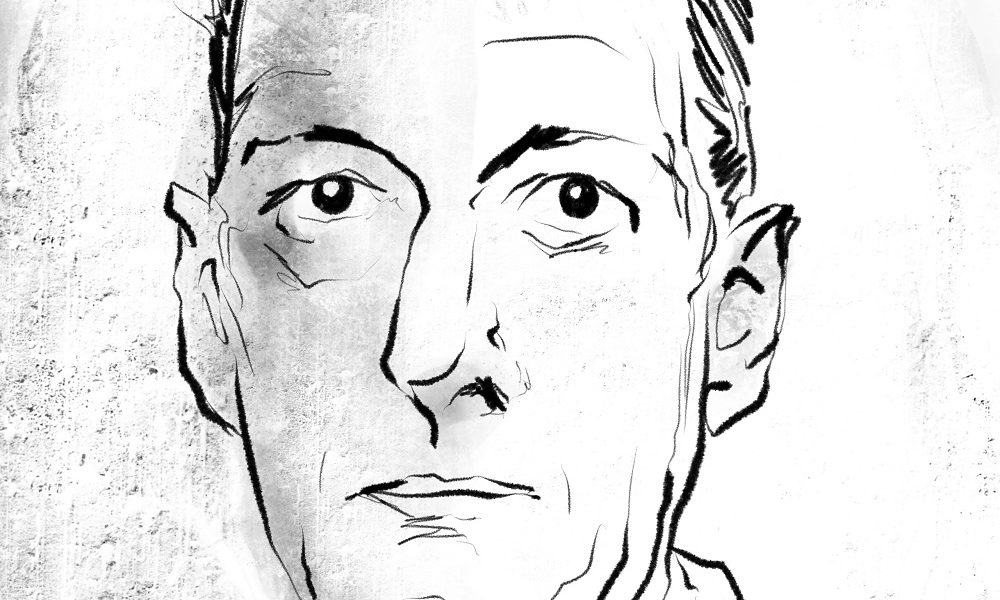 These H. P. Lovecraft quotes will take you out of this reality and into a world of weirdness, horror, and imagination.

H. P. Lovecraft, short for Howard Phillips Lovecraft, is known today as one of the greatest horror and science fiction writers of all time. However, tragically, he never lived to see his own success.

Lovecraft was a prolific writer and wrote many short stories, novels, and novellas. He wrote under several pen names and also worked as a ghostwriter. However, he would never make a lot of money off of his writing and would die in poverty at the age of 46.

Since his death, Lovecraft’s work has become well-known and cherished throughout the world with many readers considering him one of the greatest horror writers along with the likes of Edgar Allan Poe.

We hope you enjoy these H. P. Lovecraft quotes about horror, writing, and imagination.

Don’t forget to also check out these Edgar Allan Poe quotes about life, love and happiness.

1. “Creative minds are uneven, and the best of fabrics have their dull spots.” — H. P. Lovecraft

2. “I couldn’t live a week without a private library–indeed, I’d part with all my furniture and squat and sleep on the floor before I’d let go of the 1,500 or so books I possess.” — H. P. Lovecraft

3. “From even the greatest of horrors irony is seldom absent.” — H. P. Lovecraft

5. “One cannot be too careful in the selection of adjectives for descriptions.” — H. P. Lovecraft

6. “No formal course in fiction writing can equal a close and observant perusal of the stories of Edgar Allan Poe or Ambrose Bierce.” — H. P. Lovecraft

8. “Horrors, I believe, should be original – the use of common myths and legends being a weakening influence.” — H. P. Lovecraft

9. “I felt myself on the edge of the world; peering over the rim into a fathomless chaos of eternal night.” — H. P. Lovecraft

10. “No new horror can be more terrible than the daily torture of the commonplace.” — H. P. Lovecraft

11. “That which is not known of does not trouble us, while an imagined but insubstantial peril does not harm us.” — H. P. Lovecraft

12. “To know the truths behind reality is a far greater burden.” — H. P. Lovecraft

13. “That is not dead which can eternal lie, And with strange eons, even death may die.” — H. P. Lovecraft

14. “I have harnessed the shadows that stride from world to world to sow death and madness.” — H. P. Lovecraft

15. “The Old Ones were, the Old Ones are, and the Old Ones shall be. Not in the spaces we know, but between them. They walk serene and primal, undimensioned and to us unseen.” — H. P. Lovecraft

16. “The process of delving into the black abyss is to me the keenest form of fascination.” — H. P. Lovecraft

17. “It is absolutely necessary, for the peace and safety of mankind, that some of earth’s dark, dead corners and unplumbed depths be left alone; lest sleeping abnormalities wake to resurgent life, and blasphemously surviving nightmares squirm and splash out of their black lairs to newer and wider conquests.” — H. P. Lovecraft

18. “For I have always been a seeker, a dreamer, and a ponderer on seeking and dreaming.” — H. P. Lovecraft

19. “Some of us awake in the night with strange phantasms of enchanted hills and gardens, of fountains that sing in the sun, of golden cliffs overhanging murmuring seas, of plains that stretch down to sleeping cities of bronze and stone, and of shadowy companies of heroes that ride caparisoned white horses along the edges of thick forests, and then we know that we have looked back through the ivory gates into that world of wonder that was ours before we were wise and unhappy.” — H. P. Lovecraft

20. “Memories and possibilities are even more hideous than realities.” — H. P. Lovecraft

21. “I know always that I am an outsider; a stranger in this century and among those who are still men.” — H. P. Lovecraft

22. “Pleasure to me is wonder—the unexplored, the unexpected, the thing that is hidden and the changeless thing that lurks behind superficial mutability. To trace the remote in the immediate; the eternal in the ephemeral; the past in the present; the infinite in the finite; these are to me the springs of delight and beauty.” — H. P. Lovecraft

23. “All life is only a set of pictures in the brain, among which there is no difference betwixt those born of real things and those born of inward dreamings, and no cause to value the one above the other.” — H. P. Lovecraft

24. “Wise men have interpreted dreams, and the gods have laughed.” — H. P. Lovecraft

27. “The most merciful thing in the world, I think, is the inability of the human mind to correlate all its contents.” — H. P. Lovecraft

28. “As for the Republicans – how can one regard seriously a frightened, greedy, nostalgic huddle of tradesmen and lucky idlers who shut their eyes to history and science, [and] steel their emotions against decent human sympathy.” — H. P. Lovecraft

30. “Who knows the end? What has risen may sink, and what has sunk may rise. Loathsomeness waits and dreams in the deep, and decay spreads over the tottering cities of men.” — H. P. Lovecraft

31. “What a man does for pay is of little significance. What he is, as a sensitive instrument responsive to the world’s beauty, is everything!” — H. P. Lovecraft

32. “If I am mad, it is mercy! May the gods pity the man who in his callousness can remain sane to the hideous end!” — H. P. Lovecraft

33. “As human beings, our only sensible scale of values is one based on lessening the agony of existence.” — H. P. Lovecraft

34. “The greatest human achievements have never been for profit.” — H. P. Lovecraft

35. “Man is an essentially superstitious and fearful animal. Take away the herd’s Christian gods and saints and they will without failing come to worship…something else.” — H. P. Lovecraft

36. “I never ask a man what his business is, for it never interests me. What I ask him about are his thoughts and dreams.” — H. P. Lovecraft

37. “Life has never interested me so much as the escape from life.” — H. P. Lovecraft

38. “If religion were true, its followers would not try to bludgeon their young into an artificial conformity; but would merely insist on their unbending quest for truth, irrespective of artificial backgrounds or practical consequences.” — H. P. Lovecraft

39. “The very fact that religions are not content to stand on their own feet, but insist on crippling or warping the flexible minds of children in their favor, forms a sufficient proof that there is no truth in them.” — H. P. Lovecraft

40. “If there were any truth in religion, it would be even more acceptable to a mature mind than to an infant mind–yet no mature mind ever accepts religion unless it has been crippled in infancy.” — H. P. Lovecraft

42. “Almost nobody dances sober unless they happen to be insane.” — H. P. Lovecraft

44. “The sciences, each straining in its own direction, have hitherto harmed us little; but someday the piecing together of dissociated knowledge will open up such terrifying vistas of reality, and of our frightful position therein, that we shall either go mad from the revelation or flee from the deadly light into the peace and safety of a new dark age.” — H. P. Lovecraft

45. “If heaven ever wishes to grant me a boon, it will be a total effacing of the results of a mere change which fixed my eye on a certain stray piece of shelf-paper.” — H. P. Lovecraft

47. “Toil without song is like a weary journey without an end.” — H. P. Lovecraft

48. “We live on a placid island of ignorance in the midst of black seas of the infinity, and it was not meant that we should voyage far.” — H. P. Lovecraft

49. “I am disillusioned enough to know that no man’s opinion on any subject is worth a damn unless backed up with enough genuine information to make him really know what he’s talking about.” — H. P. Lovecraft

50. “The cat is such a perfect symbol of beauty and superiority that is seems scarcely possible for any true aesthete and civilized cynic to do other than to worship it.” — H. P. Lovecraft

What is your favorite H. P. Lovecraft story?

Though he did not find success during his lifetime, Lovecraft and his terrifying literary creations have sealed their fate both in pop culture and in modern mythology.

Lovecraft was an atheist and believed religion to be dangerous to society. For that reason, he created a pseudo mythology called the Cthulu Mythos (Cthulu is apparently pronounced ‘khlul-loo’ for anyone wondering). In his writing, Lovecraft created beings, like the famous Cthulu, who were parodies of gods from historical mythology.

Whether intentionally or not, Lovecraft’s legacy has included the uprising of many cults of people who follow his writings as their religion. Some of these cults take Lovecraft’s writing to heart, actually believing in his creations as reality, and some who recognize the fiction in Lovecraft’s stories but follow the themes in his works as their personal philosophy.

Whether you believe in Cthulu or not, we hope you enjoyed these H. P. Lovecraft quotes and sayings. Let us know your favorite quote in the comments below.