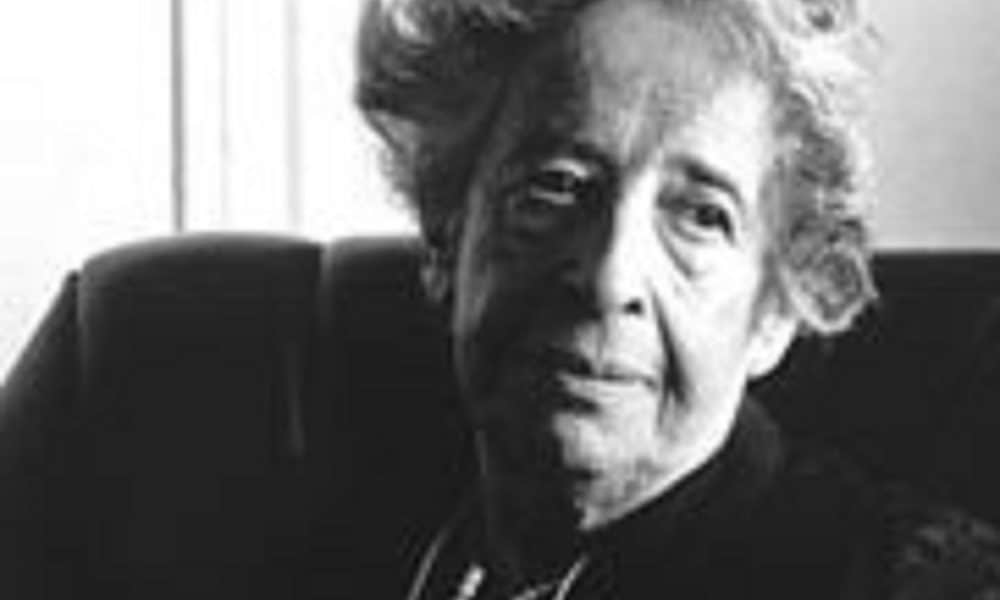 Hannah Arendt was a German-born American philosopher and one of the greatest thinkers in the 20th century. Here are our favorite Hannah Arendt quotes.

Born in Germany to a Jewish family in 1906, Arendt moved to Prussia as a toddler so that her father’s syphilis could be treated. Unfortunately, he died when she was six.

Arendt was raised by her mother who was an avid supporter of the Social Democrats and gave Arendt her first taste of political philosophy.

Arendt studied philosophical writing in college. As Europe began to grow with more anti-Jewish discrimination in the 1930s, Arendt moved often. Living in Germany, Czechoslovakia, and Switzerland before settling in Paris.

In 1941, after Germany invaded France, Arendt fled to New York City where she would stay for the rest of her life. Enjoy these Hannah Arendt quotes and sayings!

1. “Forgiveness is the key to action and freedom.” — Hannah Arendt

2. “To be free in an age like ours, one must be in a position of authority. That in itself would be enough to make me ambitious.” — Hannah Arendt

3. “Man cannot be free if he does not know that he is subject to necessity, because his freedom is always won in his never wholly successful attempts to liberate himself from necessity.” — Hannah Arendt

4. “No cause is left but the most ancient of all, the one, in fact, that from the beginning of our history has determined the very existence of politics, the cause of freedom versus tyranny.” — Hannah Arendt

5. “Economic growth may one day turn out to be a curse rather than a good, and under no conditions can it either lead into freedom or constitute a proof for its existence.” — Hannah Arendt

6. “Wherever the relevance of speech is at stake, matters become political by definition, for speech is what makes man a political being.” — Hannah Arendt

7. “Only the mob and the elite can be attracted by the momentum of totalitarianism itself. The masses have to be won by propaganda.” — Hannah Arendt

8. “Our tradition of political thought had its definite beginning in the teachings of Plato and Aristotle. I believe it came to a no less definite end in the theories of Karl Marx.” — Hannah Arendt

9. “Power and violence are opposites; where the one rules absolutely, the other is absent. Violence appears where power is in jeopardy, but left to its own course it ends in power’s disappearance.” — Hannah Arendt

10. “Under conditions of tyranny it is far easier to act than to think.” — Hannah Arendt

12. “The chief qualification of a mass leader has become unending infallibility; he can never admit an error.” — Hannah Arendt

13. “The defiance of established authority, religious and secular, social and political, as a world-wide phenomenon may well one day be accounted the outstanding event of the last decade.” — Hannah Arendt

14. “The more dubious and uncertain an instrument violence has become in international relations, the more it has gained in reputation and appeal in domestic affairs, specifically in the matter of revolution.” — Hannah Arendt

15. “The most radical revolutionary will become a conservative the day after the revolution.” — Hannah Arendt

16. “In an ever-changing, incomprehensible world the masses had reached the point where they would, at the same time, believe everything and nothing, think that everything was possible and that nothing was true.” — Hannah Arendt

17. “Mass propaganda discovered that its audience was ready at all times to believe the worst, no matter how absurd, and did not particularly object to being deceived because it held every statement to be a lie anyhow.” — Hannah Arendt

18. “The totalitarian mass leaders based their propaganda on the correct psychological assumption that, under such conditions, one could make people believe the most fantastic statements one day, and trust that if the next day they were given irrefutable proof of their falsehood, they would take refuge in cynicism; instead of deserting the leaders who had lied to them, they would protest that they had known all along that the statement was a lie and would admire the leaders for their superior tactical cleverness.” — Hannah Arendt

19. “The aim of totalitarian education has never been to instill convictions but to destroy the capacity to form any.” — Hannah Arendt

20. “We have almost succeeded in leveling all human activities to the common denominator of securing the necessities of life and providing for their abundance.” — Hannah Arendt

21. “It is my contention that civil disobediences are nothing but the latest form of voluntary association and that they are thus quite in tune with the oldest traditions of the country.” — Hannah Arendt

22. “Total loyalty is possible only when fidelity is emptied of all concrete content, from which changes of mind might naturally arise.” — Hannah Arendt

23. “The sad truth is that most evil is done by people who never make up their minds to be good or evil.” — Hannah Arendt

24. “Where all are guilty, no one is; confessions of collective guilt are the best possible safeguard against the discovery of culprits, and the very magnitude of the crime the best excuse for doing nothing.” — Hannah Arendt

25. “It is in the very nature of things human that every act that has once made its appearance and has been recorded in the history of mankind stays with mankind as a potentiality long after its actuality has become a thing of the past.” — Hannah Arendt

26. “The earth is the very quintessence of the human condition.” — Hannah Arendt

27. “Nothing we use or hear or touch can be expressed in words that equal what is given by the senses.” — Hannah Arendt

28. “In order to go on living one must try to escape the death involved in perfectionism.” — Hannah Arendt

30. “Death not merely ends life, it also bestows upon it a silent completeness, snatched from the hazardous flux to which all things human are subject.” — Hannah Arendt

31. “Loving life is easy when you are abroad. Where no one knows you and you hold your life in your hands all alone, you are more master of yourself than at any other time.” — Hannah Arendt

32. “The trouble with lying and deceiving is that their efficiency depends entirely upon a clear notion of the truth that the liar and deceiver wishes to hide.” — Hannah Arendt

34. “The ultimate end of human acts is eudaimonia, happiness in the sense of living well, which all men desire; all acts are but different means chosen to arrive at it.” — Hannah Arendt

35. “This is the precept by which I have lived: Prepare for the worst; expect the best, and take what comes.” — Hannah Arendt

36. “There are no dangerous thoughts; thinking itself is dangerous.” — Hannah Arendt

37. “The Third World is not a reality but an ideology.” — Hannah Arendt

38. “These are the fifties, you know. The disgusting, posturing fifties.” — Hannah Arendt

39. “War has become a luxury that only small nations can afford.” — Hannah Arendt

40. “By its very nature, the beautiful is isolated from everything else. From beauty no road leads to reality.” — Hannah Arendt

41. “The new always happens against the overwhelming odds of statistical laws and their probability, which for all practical, everyday purposes amounts to certainty; the new therefore always appears in the guise of a miracle.” — Hannah Arendt

42. “Action without a name, a who attached to it, is meaningless.” — Hannah Arendt

43. “For the things we have to learn before we can do them, we learn by doing them.” — Hannah Arendt

44. “Few girls are as well shaped as a good horse.” — Hannah Arendt

45. “Only crime and the criminal, it is true, confront us with the perplexity of radical evil; but only the hypocrite is really rotten to the core.” — Hannah Arendt

46. “Poets are the only people to whom love is not only a crucial but an indispensable experience, which entitles them to mistake it for a universal one.” — Hannah Arendt

47. “Promises are the uniquely human way of ordering the future, making it predictable and reliable to the extent that this is humanly possible.” — Hannah Arendt

48. “Storytelling reveals meaning without committing the error of defining it.” — Hannah Arendt

49. “No punishment has ever possessed enough power of deterrence to prevent the commission of crimes. On the contrary, whatever the punishment, once a specific crime has appeared for the first time, its reappearance is more likely than its initial emergence could ever have been.” — Hannah Arendt

50. “Forgiveness is the only way to reverse the irreversible flow of history.” — Hannah Arendt

What did you learn from these Hannah Arendt quotes?

After moving to New York during World War II, Arendt began to gain a reputation as a philosophical writer. She published works that ranged in a variety of topics, but her most common themes revolved around politics, the nature of power and evil, and totalitarianism.

She has been commemorated for her work in many ways, including having the Hannah Arendt Prize for Political Thinking named after her and has had many street names and schools use her namesake.

Arendt died of a heart attack at the age of 69, leaving her final work, The Life of the Mind unfinished.

Did you enjoy these Hannah Arendt quotes and sayings? Which quote was your favorite? Let us know in the comments below.