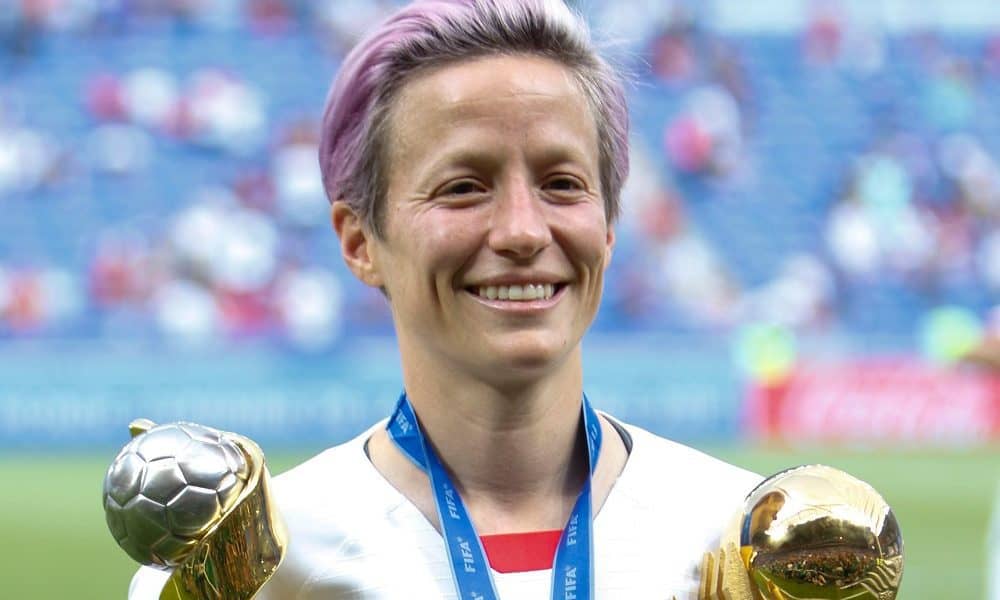 Every person has the responsibility to make a difference in this world. And it’s clear from these Megan Rapinoe quotes that soccer star is making the world a better and more equal place.

Co-captain and star forward of the US Women’s National Soccer Team, Megan Rapinoe has always been outspoken, but she made headlines in 2019 when she and her team won the Women’s World Cup. As an openly gay, female professional athlete, Rapinoe has used her platform to create awareness around issues close to her heart.

Not only is Rapinoe a strong leader for her team, but her unapologetic outspokenness towards the things she cares about is an inspiration to people everywhere. She shows that it doesn’t matter who you are or what your background is, you have a right to go after your dreams and fight for what you deserve. We hope you are inspired by these Megan Rapinoe quotes.

Don’t forget to also check out these Mia Hamm quotes from the soccer legend.

2. “The kneeling and everything, I think it really only sort of solidifies who I am as a person and the things that I stand for.” — Megan Rapinoe

4. “You can’t win a championship without gays on your team – it’s never been done before, ever. That’s science, right there!” — Megan Rapinoe

7. “I kind of want to stop just talking about things and [ask], How do we put things in action? How do we help? What do we do? I think I’m ready for that next thing. I want to be more impactful—the money where the mouth is.” — Megan Rapinoe

8. “Being a woman, we talk about equal pay all the time. We’re not talking about if you’re black or if you are Latina. I would like to get back to that and improving the relationship between the police community and the community of color. I don’t know exactly all the right things to say, but I want to engage in that conversation.” — Megan Rapinoe

9. “You are not lesser just because you are a girl.” — Megan Rapinoe

10. “The more I’ve been able to learn about gay rights and equal pay and gender equity and racial inequality, the more that it all intersects. You can’t really pick it apart. It’s all intertwined.” — Megan Rapinoe

11. “Honestly, I feel like we are a walking protest. The fact that we’re women professional athletes says that in and of itself. We’ve been feeling the inequality; we’ve been struggling with pay equality or whatever it is, or sexism in sports.” — Megan Rapinoe

12. “I think our existence in professional sports is almost a protest in and of itself in sometimes the very sexist society that we live in. For us, it’s just kind of right in line with what we always do.” — Megan Rapinoe

13. “Being female and an advocate for equal opportunities, I want to see an equal representation in people applying for the head coach job for the women’s team.” — Megan Rapinoe

14. “I’m motivated by people who like me, who are fighting for the same things. I take more energy from that than from trying to prove anyone wrong. That’s draining on yourself. But for me, to be gay and fabulous, during pride month at the World Cup, is nice.” — Megan Rapinoe

17. “We’re gracious and we’re humble, and we play the game a certain way, whether we win or lose.” — Megan Rapinoe

19. “I play a certain style. I’m not willing to compromise that part of me.” — Megan Rapinoe

20. “I couldn’t be more proud to be a co-captain with Carli and Alex on this team. It’s my absolute honor to lead this team out on the field. There’s no place I’d rather be, even in the presidential race. I’m busy, I’m sorry.” — Megan Rapinoe

21. “Some people play best when they’re frustrated and mad. I play my best when I’m happy. I really, truly do.” — Megan Rapinoe

22. “I’ve always been a risk-taker. Growing up, I had a lot of freedom and room to roam and do what I wanted, and I think that’s a huge part of my game.” — Megan Rapinoe

23. “Over the years, I have really figured out what works for me. It’s not about what anyone else is doing. I can’t worry about whether I am doing everything that another player is doing, which can be hard sometimes. I have to trust my training and know my body and figure out what will get the best out of me.” — Megan Rapinoe

24. “Growing up, I was never the best athlete or the fastest or the strongest—so I had to affect the game in a different way. Even if you’re extremely athletic and fast, if you’re doing the same thing over and over, the defense is going to figure it out. Really, it’s all about playing cat-and-mouse with the defender so I try to change it up … and put myself in a position where I have options.” — Megan Rapnioe

25. “There are not many athletes who are out. And I think it’s something that’s important. It felt important to me. I guess it seems like a weight off my shoulders because I’ve been playing a lot better than I’ve ever played before. I think I’m just enjoying myself, and I’m happy.” — Megan Rapinoe

26. “I think I have unique qualities that other people don’t have that can contribute to the team.” — Megan Rapinoe

27. “There are plenty of sports teams that say they’re very open and super accepting in the locker room. But are they really? Is it really a safe environment? Have they preset that environment to make these players feel comfortable for coming out? I don’t think so because there’s none out.” — Megan Rapinoe

28. “I think our team kind of strives on weirdness sometimes. We have that ‘rah-rah, rally’ sort of American mentality that we can all kind of get around.” — Megan Rapinoe

29. “I’ve had to learn how to listen to my body over the years and figure out how it all works together. I’m not invincible, so focusing on training my whole body and injury prevention have been extremely important.” — Megan Rapinoe

30. “Our team, in general, is in a position where people look up to us, and kids look up to us. I embrace that, and I think I have a huge LGBT following. I think it’s pretty cool, the opportunity that I have, especially in sports. There’s really not that many out athletes. It’s important to be out and to live my life that way.” — Megan Rapinoe

31. “When we, as a nation, put our minds to something, when we truly choose to care about something, change always happens.” — Megan Rapinoe

32. “If we want to be proud to be from a country like America and all the things that we hang our hats on, like diversity, equality, land of the free and home of the brave, it’s everybody’s responsibility to ensure that everyone in the country is being afforded the same rights.” — Megan Rapinoe

33. “I have chosen to kneel because I simply cannot stand for the kind of oppression this country is allowing against its own people.” — Megan Rapinoe

34. “Being a gay American, I know what it means to look at the flag and not have it protect all of your liberties.” — Megan Rapinoe

35. “As I’ve grown older I’ve really got to understand how powerful one voice can be, my voice can be, or the team’s voice can be. So to hold that back or not to use that just seems selfish in a way.” — Megan Rapinoe

36. “I’m not sure exactly where I get it from. I think I’m born with it a little bit. I think I’ve been very successful in my career, so I get a lot of positive feedback in that way… But I think I also don’t give very many of the F words… I feel like I know my worth and I know my value, or at least what I think it is.” — Megan Rapinoe

38. “This is my charge to everybody, Do what you can. Do what you have to do. Step outside of yourself. Be more. Be better. Be bigger than you’ve ever been before.” — Megan Rapinoe

39. “Be honest about how you approach failure. Don’t just be critical of yourself, because that can be self-serving. Approach it honestly, assess your performance, and assess the areas where you have fallen short. Correct them and move on. Don’t dwell on it. Don’t hold on to it.” — Megan Rapinoe

41. “Putting yourself out there is hard, but it’s so worth it. I don’t think anyone who has ever spoken out, or stood up or had a brave moment, has regretted it. It’s empowering and confidence-building and inspiring. Not only to other people but to yourself.” — Megan Rapinoe

42. “Some guy in Germany has my face tattooed on the back of his calf. That was wild. It was a decent tattoo job, but that’s kind of weird for me.” — Megan Rapinoe

43. “Hang on to your friends, and be prepared to make new ones.” — Megan Rapinoe

44. “And life will throw you some curveballs. Failure will happen, and how you handle it will help shape you into the person you are going to become.” — Megan Rapinoe

45. “I need to feel like I have that freedom to make mistakes and to just try things.” — Megan Rapinoe

46. “To say I am not mentally tired in ways and exhausted in ways would be a lie.” — Megan Rapinoe

47. “Sometimes it’s worth risking it all for a dream only you can see.” — Megan Rapinoe

48. “My mom, whether it’s right or wrong, she had dreams for me to have a certain life. It takes time to get used to that. But they’ve been really supportive, and they love me for exactly who I am.” — Megan Rapinoe

49. “It’s often hard to just throw money at a problem when you don’t really know what the problem is.” — Megan Rapinoe

50. “It’s OK to feel different right now. You are supposed to be feeling weird a lot of the time. You have a lot going on. And you are supposed to feel uncomfortable and awkward because it’s a good thing, and it helps you grow.” — Megan Rapnioe

What Megan Rapinoe quote inspired you the most?

Although the women’s team is outperforming the US Men’s National Soccer Team, there is still a considerable pay gap, with the women’s team being paid far less than what they are worth. Because of this, it’s no wonder that when the women won the World Cup, the audience chanted, “Equal pay!”

Through protests, lawsuits, and carefully chosen words during interviews, Megan Rapinoe is making a difference. By making headlines and bringing awareness to the inequality that still exists, Rapinoe is inspiring change and making the world a better place.

Did you enjoy these Megan Rapinoe quotes and sayings? Which quote was your favorite? Let us know in the comments below.