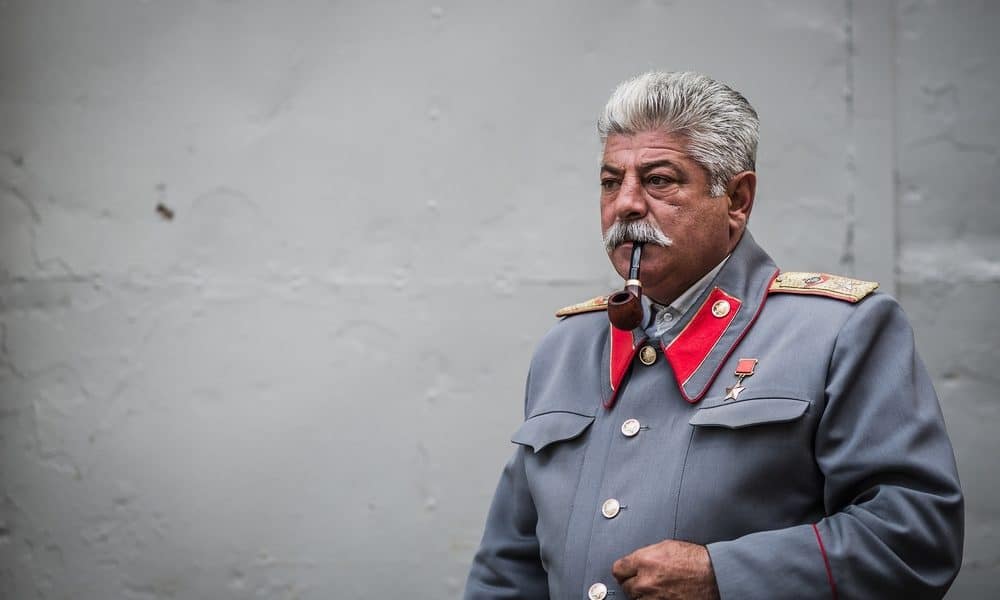 Stalin’s government was responsible for the deaths of millions due to engineered famines, ethnic cleansing, and executions. He also supported mass repression and deportation. However, there are things we can learn from these Stalin quotes; things that remind us where dangerous thoughts lead.

He joined the Marxist Russian Social Democratic Labour Party and became an editor for the party’s newspaper in his youth. Through a series of robberies, kidnappings, and racketeering schemes he raised funds for Vladimir Lenin’s Bolshevik faction. This resulted in multiple arrests and several exiles.

It isn’t surprising that when he became the country’s leader; he ruled using a blend of ideologies from Marxism and Leninism. There are also some Stalin quotes that impart a little wisdom and wit. It is this mix of dangerous and wise thoughts that have kept his ideals both popular and controversial.

Don’t forget to also check out these Napoleon Bonaparte quotes on success, love, and leadership.

1. “Death is the solution to all problems. No man – no problem.” ― Joseph Stalin

2. “The death of one man is a tragedy. The death of millions is a statistic.” ― Joseph Stalin

3. “World War II was fought for the abolition of racial exclusiveness, equality of nations and the integrity of their territories, liberation of enslaved nations and restoration of their sovereign rights, the right of every nation to arrange its affairs as it wishes, economic aid to nations that have suffered and assistance to them in attaining their material welfare, restoration of democratic liberties, and destruction of the Hitlerite regime.” ― Joseph Stalin

4. “Remember how the first world war broke out. It broke out as a result of the desire to redivide the world.” ― Joseph Stalin

5. “I know that after my death a pile of rubbish will be heaped on my grave, but the wind of History will sooner or later sweep it away without mercy.” ― Joseph Stalin

6. “In war, I would deal with the Devil and his grandmother.” ― Joseph Stalin

8. “In the Soviet army, it takes more courage to retreat than advance.” ― Joseph Stalin

9. “The Red Army and Navy and the whole Soviet people must fight for every inch of Soviet soil, fight to the last drop of blood for our towns and villages…onward, to victory!”” ― Joseph Stalin

11. “If the opposition disarms, well and good. If it refuses to disarm, we shall disarm it ourselves.” ― Joseph Stalin

Joseph Stalin quotes about the Soviet Union, and other governments and armies

12. “By May, 1st, 1937, there should not be one single church left within the borders of Soviet Russia, and the idea of God will have been banished from the Soviet Union as a remnant of the Middle Ages, which has been used for the purpose of oppressing the working classes.”― Joseph Stalin

13. “Gaiety is the most outstanding feature of the Soviet Union.” ― Joseph Stalin

14. “We [U.S.S.R. and U.S.A.] can exist peacefully together if we don’t indulge in too much mutual fault-finding in all kinds of trifles.” ― Joseph Stalin

16. “A sincere diplomat is like dry water or wooden iron.” ― Joseph Stalin

17. “If any foreign minister begins to defend to the death a ‘peace conference’, you can be sure his government has already placed its orders for new battleships and airplanes.” ― Joseph Stalin

18. “Divide the world into regional groups as a transitional stage to world government. Populations will more readily abandon their national loyalty to a vague regional loyalty than they will for a world authority. Later, the regions can be brought together all the way into a single world dictatorship.” ― Joseph Stalin

19. “The leaders come and go, but the people remain. Only the people are immortal.” ― Joseph Stalin

20. “Ah, these diplomats! What chatterboxes! There’s only one way to shut them up – cut them down with machine guns. Bulganin, go and get me one!” ― Joseph Stalin

21. “History shows that there are no invincible armies.” ― Joseph Stalin

23. “Everyone imposes his own system as far as his army can reach.” ― Joseph Stalin

24. “Print is the sharpest and the strongest weapon of our party.” ― Joseph Stalin

25. “When we hang the capitalists, they will sell us the rope we use.” ― Joseph Stalin

26. “In speaking of the capitalists who strive only for profit, only to get rich, I do not want to say that these are the most worthless people capable of doing nothing else. Many of them undoubtedly possess great organizing talent, which I would not dream of denying. We Soviet people learn a lot from the capitalists. But if you mean people who are prepared to reconstruct the world, of course, you will not be able to find them in the ranks of those who faithfully serve the cause of profit…The capitalist is riveted in profit and nothing can tear him away from it.” ― Joseph Stalin

27. “Undoubtedly, our path is not of the easiest; but, just as undoubtedly, we are not to be frightened by difficulties. Paraphrasing from the well-known words of Luther, Russia might say: ‘Here I stand on the frontier between the old, capitalist world and the new, socialist world. Here on this frontier, I unite the efforts of the proletarians of the West and of the peasantry of the East in order to shatter the old world. May the god of history be my aid!” ― Joseph Stalin

28. “Advance towards socialism cannot but cause the exploiting elements to resist the advance, and the resistance of the exploiters cannot but lead to the inevitable sharpening of the class struggle.” ― Joseph Stalin

29. “Real liberty exists only there where exploitation has been annihilated, where no oppression of some peoples by others exists, where there is no unemployment and pauperism, where a person does not tremble because tomorrow he may lose his job, home, and bread.” ― Joseph Stalin

30. “Mankind is divided into rich and poor, into property owners and exploited; and to abstract, oneself from this fundamental division, and from the antagonism between poor and rich, means abstracting oneself from fundamental facts.” ― Joseph Stalin

31. “It is difficult for me to imagine what “personal liberty” is enjoyed by an unemployed, hungry person. True freedom can only be where there is no exploitation and oppression of one person by another; where there is not unemployment, and where a person is not living in fear of losing his job, his home, and his bread. Only in such a society personal and any other freedom can exist for real and not on paper.” ― Joseph Stalin

32. “Take some exercise, try to recover the look of a human being.” ― Joseph Stalin

33. “Education is a weapon whose effects depend on who holds it in his hands and at whom it is aimed.” ― Joseph Stalin

34. “It is not heroes that make history, but history that makes heroes.” ― Joseph Stalin

35. “I believe in one thing only, the power of human will.” ― Joseph Stalin

36. “The writer is the engineer of the human soul.” ― Joseph Stalin

37. “Quantity has a quality all its own.” ― Joseph Stalin

39. “We are fifty or a hundred years behind the advanced countries. We must make good this distance in ten years. Either we do it, or they will crush us.” ― Joseph Stalin

41. “Principles triumph, they do not compromise.” ― Joseph Stalin

42. “The only way a kid is going to practice is if it’s total fun for him… and it was for me.” ― Joseph Stalin

44. “Gratitude is a sickness suffered by dogs.” ― Joseph Stalin

45. “You cannot make a revolution with silk gloves.” ― Joseph Stalin

46. “Everybody has a right to be stupid, but some people abuse the privilege.” ― Joseph Stalin

48. “How do you expect the Germans to revolt when they don’t even dare walk on the grass?” ― Joseph Stalin

49. “You do not lament the loss of hair of one who has been beheaded.” ― Joseph Stalin

What did you learn from these Joseph Stalin quotes?

By 1937, Stalin had achieved personal control over the political party and the state. Despite an earlier pact with Nazi Germany, the two nations would clash when Germany invaded the Soviet Union in 1941. This act ended the pact, and the Red Army pushed back the German forces. They captured Berlin in 1945, bringing an end to World War II in Europe. Tensions between the Soviet government (and its allies) and the US contributed to the Cold War.

Stalin’s leadership through the post-war reconstruction period included developing a nuclear weapon. The country also experienced another major famine and an antisemitic campaign. His historical significance has been championed and condemned.

Some see him as a fighter for the working class, and a leader that built his country into a world power. Others see him as a murderous, vicious monster. These Stalin quotes depict both the ruthless leader with little regard for people and the leader who was concerned about the state of his country. Some of these quotes also prove he could be wise and witty. What is important is that we learn something from everyone that has impacted history, so we can be better in the future.

What’s your biggest takeaway from these Joseph Stalin quotes and sayings? Do you have any other favorite quotes to add? Let us know in the comment section below.