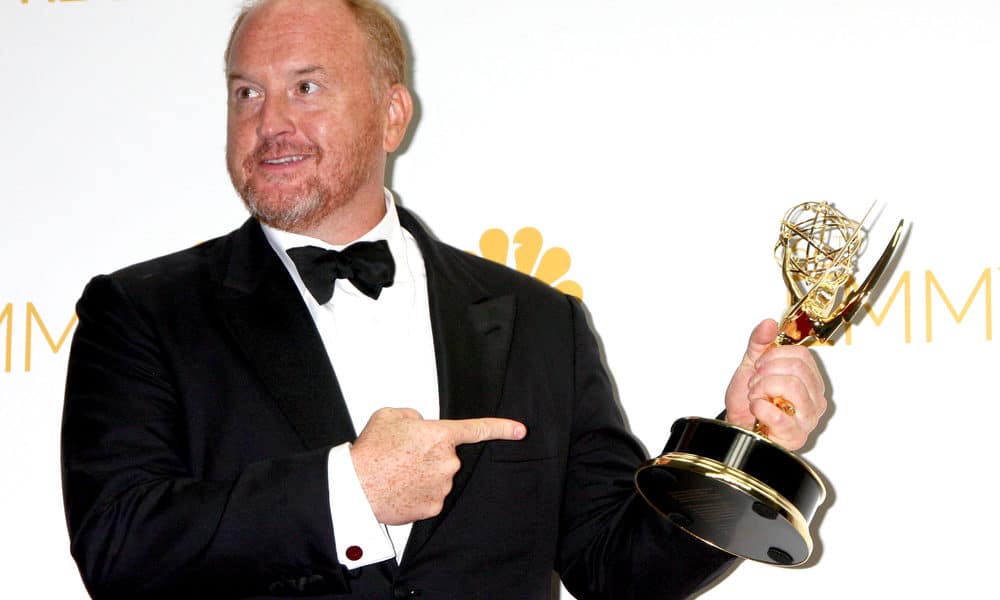 We hope you enjoy these Louis C.K. quotes about life, parenthood, and comedy.

Louis C.K. was born in Washington, D.C., but he grew up in his father’s native country of Mexico. When C.K. was seven, his family moved back to the U.S. and C.K. began learning English. He has said that he has now forgotten much of the Spanish he knew as his first language.

C.K. began his comedy career at the age of 17 when he directed a short film titled, Trash Day. A year later, he made his first attempt at stand-up, but he didn’t have enough material to fill the time the club had given him. The experience left him not wanting to try comedy again for another two years.

In 1993, C.K.’s comedy career took off after he was hired as a writer for Late Night With Conan O’Brien. Since then, he has built a successful writing, acting, and comedic career for himself and has won several Emmys and Grammys for his comedic material.

Don’t forget to also check out these George Carlin quotes that will make you laugh, then think.

1. “The thing is, comedy’s gone in a weird direction. People are really into ironic comedy and fakeness and cleverness.” – Louis C.K.

2. “Comedians work great as actors because they’re good under pressure. With a lot of actors, you have to make them feel like everything’s going really well to get a good performance out of them. But, if you have a comedian on the set, you can tell them, ‘Hey, you really are screwing this up,’ and then they just get better.” – Louis C.K.

4. “You don’t look down at your feet. A lot of comedians want to look down at their feet, but you break contact with the audience.” – Louis C.K.

5. “It’s a positive thing to talk about terrible things and make people laugh about them.” – Louis C.K.

6. “I do love standup. I love comedians. They’re my community. Also, because I know so many of them, I know their value. I know what they can do.” – Louis C.K.

7. “Technically, I’ve learned that having good legs and wind is good for being on stage. You have to be in shape and have endurance.” – Louis C.K.

10. “When you write from your gut and let the stuff stay flawed and don’t let anybody tell you to make it better, it can end up looking like nothing else.” – Louis C.K.

11. “A lot of stand-up specials for cable are meant to glorify the comedian. They put you in a really beautiful theater, and sometimes they even blow a little smoke in there to make it misty and sweet. They make the guy look like he’s a big rock star. But comedy’s not really glamorous. It doesn’t enhance comedy for it to look good.” – Louis C.K.

12. “I get mad like anybody else does, but being able to laugh about getting mad is very healthy, and my kids know that.” – Louis C.K.

13. “It’s hard having kids because it’s boring… It’s just being with them on the floor while they be children. They read Clifford the Big Red Dog to you at a rate of 50 minutes a page, and you have to sit there and be horribly proud and bored at the same time.” – Louis C.K.

14. “My kids used to love math. Now it makes them cry. Thanks, standardized testing and common core!” – Louis C.K.

15. “The greatest thing about having a child is putting yourself second in your own life. It’s a massive gift to be able to say you’re not the most important person to yourself.” – Louis C.K.

16. “When you’re a father in a marriage, you sort of become the mother’s assistant. And you sort of get a list from her every day and you run down the list and it feels very much like a chore. And a lot of fathers live very much in avoidance, and they sit on the toilet. Or they say, ‘Oh honey, it took me 40 minutes to go to the post office.’ And they just sort of sit in the driveway and heave a big sigh- ‘Oh, I have to go back in.’ But then once you take it out on your own, you have to take it all on. And you sort of activate male skills that you didn’t know you could apply to fatherhood.” – Louis C.K.

17. “My 13-year-old daughter leaves the house at 7:15 every morning and takes a smelly city bus to school way uptown. It’s like 8 degrees out, and it’s dark and she’s got this morning face and I send her out there to take a bus. Meanwhile, my driver is sitting in a toasty Mercedes that’s going to take me to work once both kids are gone. I could send her in the Mercedes and then have it come back to get me, but I can’t have my kid doing that. I can’t do that to her. Me? I earned that f*cking Mercedes. You better f*cking believe it.” – Louis C.K.

18. “When your kid is being selfish or greedy and you want to help them not be that way, you have to find a way to articulate it and inspire them.” – Louis C.K.

19. “Spend time with your kids and have your own ideas about what they need. It won’t take away your manhood; it will give it to you.” – Louis C.K.

20. “Well, when I was younger, I lied all the time, because once you understand the power of lying, it’s really like magic because you transform reality for people.” – Louis C.K.

21. “One thing I learned from drinking is that if you ever go Christmas caroling, you should go with a group of people. And also go in mid-December.” – Louis C.K.

22. “People say there’s delays on flights. Delays, really? New York to California in five hours, that used to take 30 years, a bunch of people used to die on the way there, have a baby, you would end up with a whole different group of people by the time you got there. Now you watch a movie and [go to the toilet] and you’re home.” – Louis C.K.

26. “People come back from flights and tell you a story like it’s a horror story. That’s how bad they make it sound. They’re like, ‘It was the worst day of my life. We didn’t board for 20 minutes and they made us sit there on the runway for 40 minutes.’ Oh really? What happened next? Did you fly in the air, incredibly, like a bird? Did you partake in the miracle of human flight you non-contributing zero?” – Louis C.K.

27. “I’m bored’ is a useless thing to say. I mean, you live in a great, big, vast world that you’ve seen none percent of. Even the inside of your own mind is endless; it goes on forever, inwardly, do you understand? The fact that you’re alive is amazing, so you don’t get to say ‘I’m bored.” – Louis C.K.

28. “I think you have to try and fail because failure gets you closer to what you’re good at.” – Louis C.K.

29. “Everything that’s difficult you should be able to laugh about.” – Louis C.K.

31. “Human kindness has no reward. You should give to others in every way you see. expect absolutely nothing from anyone. It should be your goal to love every human you encounter. All human suffering that you’re aware of and continues without your effort to stop it becomes your crime.” – Louis C.K.

32. “I always tell my kids to cut a sandwich in half right when you get it, and the first thought you should have is somebody else. You only ever need half a burger.” – Louis C.K.

33. “Feeling unsure and lost is part of your path. Don’t avoid it. See what those feelings are showing you and use it.” – Louis C.K.

39. “Whenever I’ve encountered a Christian saying, Why don’t you stop talking like that so I can hear you?’ I think, ‘Well you’re the one putting the earmuffs on, but I wish you could hear me because I like you.” – Louis C.K.

40. “Self-love is a good thing but self-awareness is more important. You need to once in a while go ‘Uh, I’m kind of an asshole.” – Louis C.K.

43. “If the whole country had to have the same conversation that was safe for everybody, it would be a pretty awful place to live. There wouldn’t be a conversation.” – Louis C.K.

44. “I grew up in a generation that had exponential technological advances.” – Louis C.K.

45. “I wish I could know everything ever, like that would be my wish – that’s what I hope heaven is, that they tell you who shot JFK and all that stuff.” – Louis C.K.

46. “My show is sort of a short-film anthology, and I’m able to tell little stories that don’t necessarily carry a whole episode in terms of narrative. I like the audience not being sure what they’re getting. I think it’s more fun to watch something when you’re discovering it as you go along.” – Louis C.K.

47. “I grew up in Boston and didn’t get the accent, and one of the reasons is that I started in Spanish. I was a little kid, so all I had to do was completely reject my Spanish and my Mexican past, which is a whole lot easier because I’m white with red hair. I had the help of a whole nation of people just accepting that I’m white.” — Louis C.K.

48. “Race doesn’t mean what it used to in America anymore. It just doesn’t. Obama’s black, but he’s not black the way people used to define that. Is black your experience or the color of your skin? My experience is as a Mexican immigrant, more so than someone like George Lopez. He’s from California. But he’ll be treated as an immigrant. I am an outsider. My Abuelita, my grandmother, didn’t speak English. My whole family on my dad’s side is in Mexico. I won’t ever be called that or treated that way, but it was my experience.” – Louis C.K.

49. “Every year white people add 100 years to how long ago slavery was. I’ve heard educated white people say, ‘slavery was 400 years ago.’ No, it very wasn’t. It was 140 years ago…that’s two 70-year-old ladies living and dying back to back. That’s how recently you could buy a guy.” – Louis C.K.

50. “I didn’t make any kind of grades in high school. My mother was a single mom, putting my three sisters through college, and I was such a bad student that I knew I had no right to take her money. But I loved being in classes and learning. I took in a huge amount of what I learned, but I had a feeling of always being behind and being in trouble.” – Louis C.K.

Which Louis C.K. quote was your favorite?

Louis C.K.’s comedic success was not easy. It took him years of auditions, dingy comedy clubs, and writing for other people before he finally landed a successful career.

C.K. has a comedy style influenced by legendary comedians like Geroge Carlin, Larry David, Joan Rivers, and Steve Martin. His comedy is usually blunt, dark, and often makes light out of uneasy topics. Like many comedians, C.K. is not afraid to retell his own personal experiences in a comedic way with his routines often revolving around personal stories, his children, and other important people in his life.

Did you enjoy these Louis C.K. quotes and sayings? Let us know in the comments below.