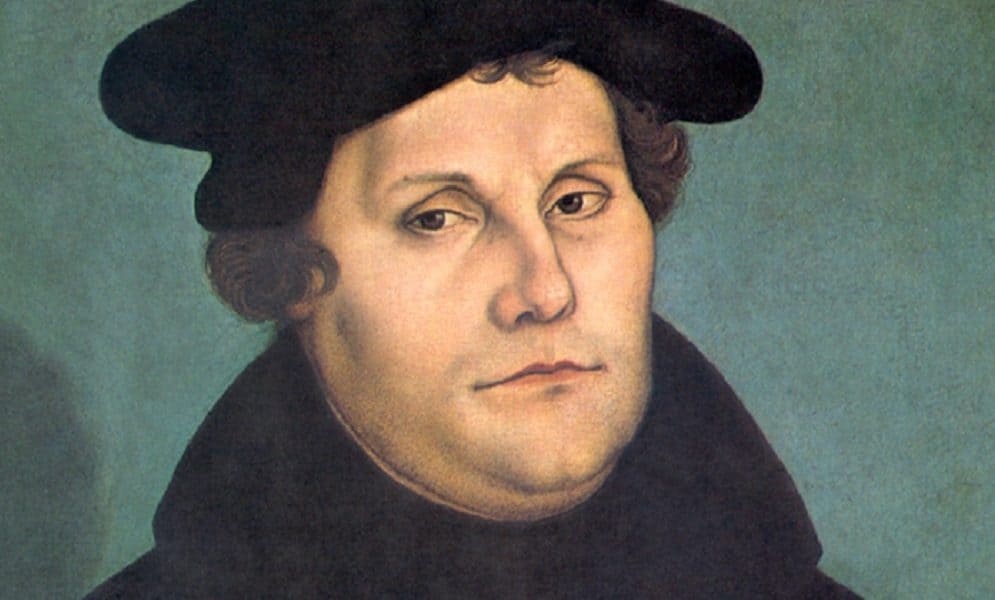 Hundreds of Martin Luther quotes about theology and Christianity are still relevant up to this day.

As a humble German friar who sparked a religious revolution called the Protestant Reformation in the 16h century, Martin Luther is considered as one of the major movers of Christianity during his time.

By being a theologian and writer, many Martin Luther quotes ignited division among Catholics where Protestantism emerged with five strands namely Lutheranism, Calvinism, the Anglican Communion, the Anabaptists, and the Antitrinitarians. He released “95 Theses,” his book divulging central beliefs saying that the Bible is the sole religious authority and that humans can only be saved through faith and not through deeds.

Martin Luther also attacked the Catholic Church by calling out its corrupt practice of selling indulgences to people to be saved from their sins. This made a rift in Western Christianity and has also affected political stance in Europe.

Don’t forget to also check out these Christian quotes that inspire faith & love.

1. “In the bonds of Death He lay Who for our offense was slain; But the Lord is risen to-day, Christ hath brought us life again, Wherefore let us all rejoice, Singing loud, with cheerful voice, Hallelujah!” – Martin Luther

2. “All creatures are merely veils under which God hides Himself and deals with us.” – Martin Luther

3. “The Clergy is the greatest hindrance to faith.” – Martin Luther

4. “Whoever does not accept my teaching may not be saved — for it is God’s teaching and not mine.” – Martin Luther

5. “I cannot forbid a person to marry several wives, for it does not contradict Scripture.” – Martin Luther

6. “Leave the ass burdened with laws behind in the valley. But your conscience, let it ascend with Isaac into the mountain.” – Martin Luther

7. “The devil and temptations also afford us occasion to learn and understand the Scriptures, by experience and practice. Without these we should never understand them, however diligently we read and listened to them.” – Martin Luther

8. “I know that a Christian should be humble, but against the Pope I am going to be proud and say to him: “You, Pope, I will not have you for my boss, for I am sure that my doctrine is divine.” – Martin Luther

9. “No greater mischief can happen to a Christian people than to have God’s word taken from them, or falsified so that they no longer have it pure and clear. God grant we and our descendants be not witness to such a calamity.” – Martin Luther

11. “A Christian has no need of any law in order to be saved since through faith we are free from every law. Thus all the acts of a Christian are done spontaneously, out of a sense of pure liberty.” – Martin Luther

12. “The Mass is the greatest blasphemy of God, and the highest idolatry upon earth, an abomination the like of which has never been in Christendom since the time of the Apostles.” – Martin Luther

13. “God writes His Gospel not in the Bible alone but in trees and flowers and clouds and stars.” – Martin Luther

14. “So our Lord God commonly gives riches to those gross asses to whom He vouchsafes nothing else.” – Martin Luther

15. “Our Lord has written the promise of resurrection, not in books alone, but in every leaf in springtime.” – Martin Luther

16. “The mad mob does not ask how it could be better, only that it be different. And when it then becomes worse, it must change again. Thus they get bees for flies, and at last hornets for bees.” – Martin Luther

17. “He who loses sight of the word of God, falls into despair; the voice of heaven no longer sustains him; he follows only the disorderly tendency of his heart.” – Martin Luther

18. “The faith towards God in Christ must be sure and steadfast, that it may solace and make glad the conscience, and put it to rest. When a man has this certainty, he has overcome the serpent; but if he be doubtful of the doctrine, it is for him very dangerous to dispute with the devil.” – Martin Luther

19. “The confidence and faith of the heart alone make both God and an idol. If your faith and trust be right, then is your god also true; and, on the other hand, if your trust be false and wrong, then you have not the true God; for these two belong together faith and God. That now, I say, upon which you set your heart and put your trust is properly your god.” – Martin Luther

20. “Faith is a living, bold trust in God’s grace, so certain of God’s favor that it would risk death a thousand times trusting in it. Such confidence and knowledge of God’s grace makes you happy, joyful and bold in your relationship to God and all creatures.” – Martin Luther

21. “God indeed tempteth no man; but yet we ask, in this petition, that he would keep and preserve us, lest the devil, the world, and our own flesh delude and draw us away from the true faith, and throw us into superstition, distrust, despair, and other grievous sins and wickedness; and that, if we should be tempted therewith even to the highest degree, we still may conquer, and at last triumph over them.” – Martin Luther

22. “By God’s grace, I know Satan very well. If Satan can turn God’s Word upside down and pervert the Scriptures, what will he do with my words — or the words of others?” – Martin Luther

23. “For where God built a church, there the Devil would also build a chapel… Thus is the Devil ever God’s ape.” – Martin Luther

24. “This year is the year of man’s ingratitude: the next will be the year of God’s chastisement; for God must needs chastise, though ’tis against his nature: we will have it so.” – Martin Luther

25. “The universities only ought to turn out men who are experts in the Holy Scriptures, men who can become bishops and priests, and stand in the front line against heretics, the devil, and all the world. But where do you find that?” – Martin Luther

27. “Many have been deceived by outward appearances and have proceeded to write and teach about good works and how they justify without even mentioning faith… Wearying themselves with many works, they never come to righteousness.” – Martin Luther

28. “A theologian should be thoroughly in possession of the basis and source of faith—that is to say, the Holy Scriptures. Armed with this knowledge it was that I confounded and silenced all my adversaries; for they seek not to fathom and understand the Scriptures; they run them over negligently and drowsily; they speak, they write, they teach, according to the suggestion of their heedless imaginations.” – Martin Luther

29. “The fool will upset the whole science of astronomy, but as the Holy Scripture shows, it was the sun and not the earth which Joshua ordered to stand still.” – Martin Luther

30. “True humility does not know that it is humble. If it did, it would be proud from the contemplation of so fine a virtue.” – Martin Luther

32. “A theologian is born by living, nay dying and being damned, not by thinking, reading, or speculating.” – Martin Luther

33. “Let us not lose the Bible, but with diligence, in fear and invocation of God, read and preach it. While that remains and flourishes, all prospers with the state; ’tis head and empress of all arts and faculties. Let but divinity fall, and I would not give a straw for the rest.” – Martin Luther

34. “I have grounded my preaching upon the literal word; he that pleases may follow me; he that will not may stay.” – Martin Luther

35. “Where the battle rages, there the loyalty of the soldier is proved.” – Martin Luther

36. “A lie is like a snowball; the longer it is rolled, the larger it is.” – Martin Luther

39. “Forgive us our trespasses as we forgive them that trespass against us.” – Martin Luther

40. “A penny saved is better than a penny earned.” – Martin Luther

41. “Truly speech has wonderful strength and power, that through a mere word, proceeding out of the mouth of a poor human creature, the devil, that so proud and powerful spirit, should be driven away, shamed and confounded.” – Martin Luther

42. “They are trying to make me into a fixed star. I am an irregular planet.” – Martin Luther

43. “The great unthankfulness, contempt of God’s word, and wilfulness of the world, make me fear that the divine light will soon cease to shine on man, for God’s word has ever had its certain course.” – Martin Luther

44. “Twas a special gift of God that speech was given to mankind; for through the Word, and not by force, wisdom governs.” – Martin Luther

46. “I would advise no one to send his child where the Holy Scriptures are not supreme. Every institution that does not unceasingly pursue the study of God’s word becomes corrupt. Because of this, we can see what kind of people they become in the universities and what they are like now.” – Martin Luther

47. “I greatly fear that the universities, unless they teach the Holy Scriptures diligently and impress them on the young students, are wide gates to hell.” – Martin Luther

48. “Whenever the word is rightly preached, and attentively heard, it never fails to bring forth fruit.” – Martin Luther

49. “Great men and heroes are special gifts of God, men who He gives and upholds, who carry on their work and calling, and do great deeds.” – Martin Luther

50. “We must not regard what or how the world esteems us, so we have the Word pure, and are certain of our doctrine.” – Martin Luther

What did you learn from these Martin Luther quotes?

Today, more than 500 years after, Martin Luther is still an influential personality in religion even after he died in 1546.

From being an Augustinian monk and scholar who preferred anonymity, Martin Luther stood up from the challenge of igniting a religious revolution to open people’s eyes from the injustices and corrupt practices of the then Catholic Church.

Through his work, Martin Luther has paved the way in changing the Catholic Church and bringing Reformation among believers. Truly, Martin Luther’s quotes and writings have changed the history not only of religion but of the culture and tradition of the West.

Eventually, this has also changed how people in other regions across the world decide on their religious affiliations. His sayings are still being used in theology up to this day, proving that he is an influential and important personality in Christianity.

What’s your biggest takeaway from these Martin Luther quotes and sayings? Do you have any other favorite quotes to add? Let us know in the comment section below.