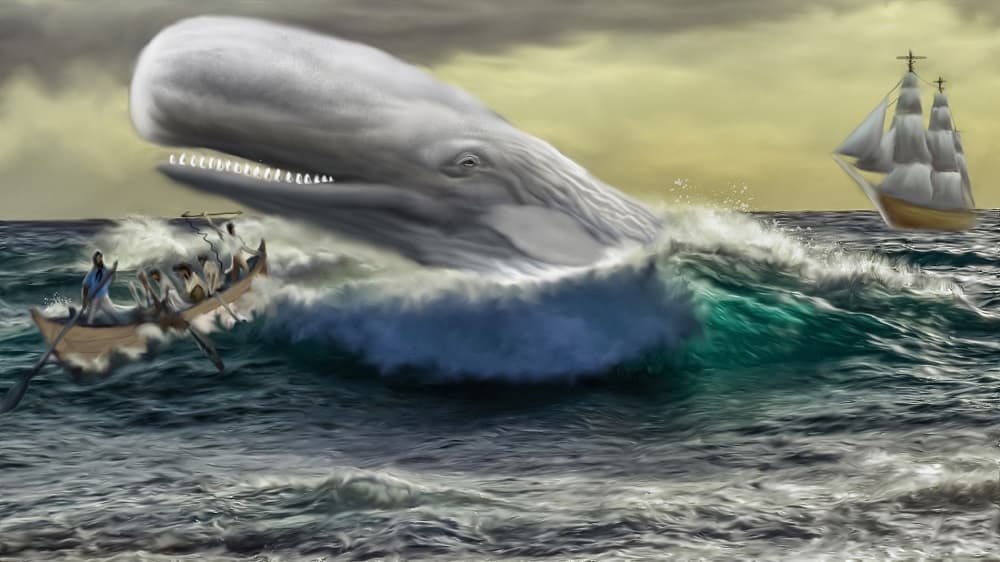 Moby Dick, written by Herman Melville, is an American novel that was published in 1851. When the book was published, it was met with a mix of reviews, made little money, and was out of print when Melville died in 1891.

However, 100 years after the author’s death the book was heralded as a “Great American Novel.” In 1956 a color film adaptation of the novel graced the screen. John Huston directed it and the film starred Gregory Peck, Richard Basehart, and Leo Genn.

Both the film and the novel are Ishmael’s narrative of Captain Ahab’s obsessive revenge-fueled quest. After all, Moby Dick, the giant white sperm whale, bit off Ahab’s leg at the knee on a previous whaling voyage.

Two prominent writers praised Melville’s work, with William Faulkner even saying ‘he wished he had written the book himself.’ D. H. Lawrence called it “one of the strangest and most wonderful books in the world” and “the greatest book of the sea ever written”.

Its opening sentence, “Call me Ishmael”, which appears in the book and the film, is among world literature’s most famous quotes.

1. “Speak not to me of blasphemy, man; I’d strike the sun if it insulted me. Look ye, Starbuck, all visible objects are but as pasteboard masks. Some inscrutable yet reasoning thing puts forth the molding of their features. The white whale tasks me; he heaps me.” — Captain Ahab (Gregory Peck)

2. “Yet he is but a mask. ‘Tis the thing behind the mask I chiefly hate; the malignant thing that has plagued mankind since time began; the thing that maws and mutilates our race, not killing us outright but letting us live on, with half a heart and half a lung.” — Captain Ahab (Gregory Peck)

6. “I’ll follow him around the Horn, and around the Norway maelstrom, and around perdition’s flames before I give him up.” — Captain Ahab (Gregory Peck)

The Manxman, a sailor: “We all see it. That don’t make it real.”

8. “Long days and nights we strained at the oars while a white whale swam freely on, widening the waters between himself and Ahab’s vengeance.” — Ishmael (Richard Basehart)

11. “To be enraged with a dumb brute that acted out of blind instinct is blasphemous.” — Starbuck (Leo Genn)

12. “By heaven’s man, we are turned round and round in this world, like yonder windlass, and fate is the handspike.” — Captain Ahab (Gregory Peck)

15. “I have, lad, I have. At sea one day, you’ll smell land where there’ll be no land, and on that day Ahab will go to his grave, but he’ll rise again within the hour. He will rise and beckon. Then all; all save one shall follow. (Slinking away with a smile on his face) Mornin’, lads — mornin’. May the heavens bless you.” — Elijah (Royal Dano)

17. “It is our task in life to kill whales, to furnish oil for the lamps of the world. If we perform that task well and faithfully, we do a service to mankind that pleases Almighty God. Ahab would deny all that. He has taken us from the rich harvest we were reaping to satisfy his lust for vengeance. He is twisting that which is holy into something dark and purposeless. He is a Champion of Darkness. Ahab’s red flag challenges the heavens.” — Starbuck (Leo Genn)

19. “O Father, mortal or immortal, here I die. I have striven to be Thine, more than to be this world’s. Yet this is nothing. I leave eternity to Thee. For what is man, that he should live out the lifetime of his God?” — Father Mapple (Orson Welles)

Moby Dick quotes about being captain, crewmates, and mutiny

21. Starbuck: “Listen to this. A captain who, from private motives, employs his vessel for another purpose from that intended by the owners, is answerable to the charge of usurpation, and his crew is morally and legally entitled to employ forceful means in wresting his command from him.”

22. Mr. Flask: “Wrest his command from him? Does that mean take over?”

25. “It is an evil voyage, I tell thee. If Ahab has his way, neither thee nor me, nor any member of this ship’s company will ever see home again.” — Starbuck (Leo Genn)

26. “His courage was one of the great staples of the ship, like beef or flour. There, when required, and not to be foolishly wasted.” — Ishmael (Richard Basehart)

29. “Sleep? That bed is a coffin, and those are winding sheets. I do not sleep, I die.” — Captain Ahab (Gregory Peck)

30. “The coffin. Drowned Queequeg’s coffin was my life buoy. For one whole day and night, it sustained me on that soft and dirge-like main. Then, a sail appeared; It was the Rachel. The Rachel who in her long melancholy search for her missing children found — another orphan. The drama’s done. All are departed away. The great shroud of the sea rolls over the Pequod, her crew, and Moby Dick. I only am escaped — alone, to tell thee.” — Ishmael (Richard Basehart)

31. “Blacksmith, I set ye a task. Take these harpoons and lances. Melt them down. Forge me new weapons that will strike deep and hold fast. But do not douse them in water; they must have a proper baptism. What say ye, all ye men? Will you give as much blood as shall be needed to temper the steel?” — Captain Ahab (Gregory Peck)

32. “Ehhhh, you can’t fool us; it’s the easiest thing in the world for a man to look as if he’s got a great secret in him.” — Ishmael (Richard Basehart)

33. “He did not feel the wind, or smell the salt air. He only stood, staring at the horizon, with the marks of some inner crucifixion and woe deep in his face.” — Ishmael (Richard Basehart)

34. “Doesn’t the devil live forever; who ever heard that the devil was dead? Did you ever see any person wearing mourning for the devil?” ― Herman Melville

35. “Tell him to paint me a sign, with-“no suicides permitted here, and no smoking in the parlor;” might as well kill both birds at once.” ― Herman Melville

36. “For all men tragically great are made so through a certain morbidness. Be sure of this, O young ambition, all mortal greatness is but disease.” ― Herman Melville

37.“Consider the subtleness of the sea; how its most dreaded creatures glide under water, unapparent for the most part, and treacherously hidden beneath the loveliest tints of azure.” ― Herman Melville

The best inspirational Moby Dick quotes from the novel

41. “Ignorance is the parent of fear.” ― Herman Melville

42. “A noble craft, but somehow a most melancholy! All noble things are touched with that.” ― Herman Melville

43. “Give not thyself up, then, to fire, lest it invert thee, deaden thee, as for the time it did me. There is a wisdom that is woe; but there is a woe that is madness.” ― Herman Melville

44. “Wonderfullest things are ever the unmentionable; deep memories yield no epitaphs.” ― Herman Melville

46. “I am past scorching; not easily canst thou scorch a scar.” ― Herman Melville

47. “For there is no quality in this world that is not what it is merely by contrast. Nothing exists in itself.” ― Herman Melville

48. “I leave a white and turbid wake; pale waters, paler cheeks, where’er I sail. The envious billows sidelong swell to whelm my track; let them; but first I pass. ” ― Herman Melville

49. “But vain to popularize profundities, and all truth is profound.” ― Herman Melville

50. “I promise nothing complete; because any human thing supposed to be complete, must for that very reason infallibly be faulty.” ― Herman Melville

Which of these Moby Dick quotes is your favorite?

The book is incredibly long, with the three volumes of the British edition comprising 927 pages and the single American volume coming in at 635 pages. It will take you a minute to get through, but it is worth it.

The story is filled with metaphors and themes about religion, life and death, and authoritarian behavior. The movie is a much shorter time commitment though and will take under two hours to watch. Either medium will take you on a journey of epic proportions.

If you haven’t read it or watched it yet, you really should! Moby-Dick is a tale about suffering, endurance, and the dogged perseverance of humanity. It is an intimate look at the motives that drive people and moral behavior.

Have you read the book and watched the movie? Tell us which you preferred in the comment section below. Feel free to share some of your favorite Moby Dick quotes and lines that didn’t make this list!