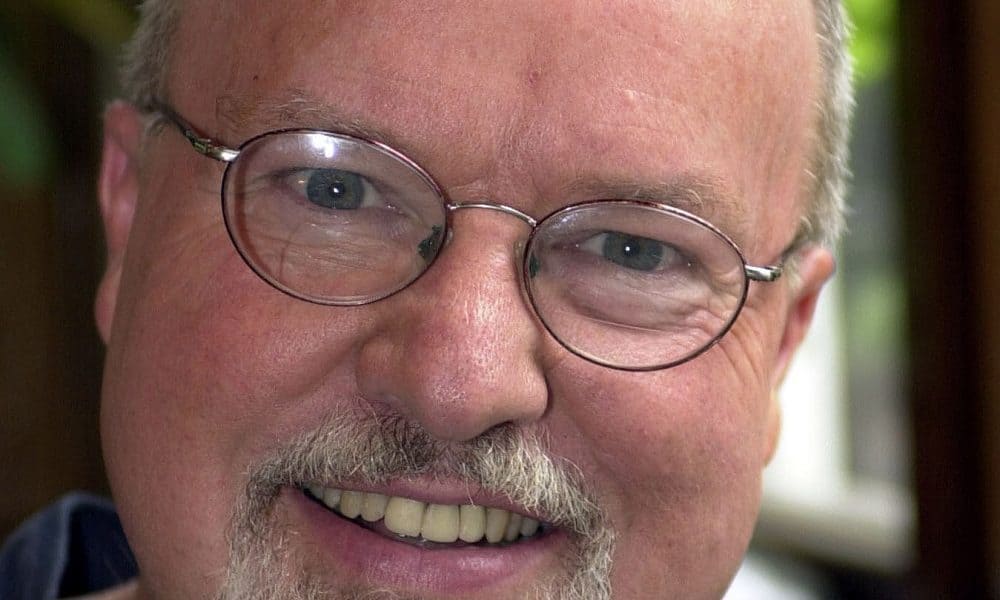 These Richard Rohr quotes will inspire you to connect deeper with your spirituality.

Richard Rohr is a Franciscan priest and founder of the Center for Action and Contemplation, a facility that, “seeks to empower individuals to live out their sacred soul tasks in service to the world” through the contemplative programs and resources that they offer.

Rohr has written several books where he shares the wisdom he has acquired by studying religion and spirituality.

While these Richard Rohr quotes focus on his beliefs in Christian spirituality, we hope that they inspire you to connect deeper in whatever spirituality you follow.

Don’t forget to also check out these spiritual quotes about inner peace and love.

1. “Once you experience being loved when you are unworthy, being forgiven when you did something wrong, that moves you into non-dual thinking. You move from what I call meritocracy, quid pro quo thinking, to the huge ocean of grace, where you stop counting or calculating.” — Richard Rohr

2. “If I’m going to continue to be any kind of spiritual teacher, I’ve got to go deeper myself. And so for me, [I am] preserving long periods of solitude, silence, prayer, journaling, study, writing. I don’t turn on music or the TV unless I really need to.” — Richard Rohr

3. “It’s important to note that Jesus and Christ are two different faith affirmations. Hardly any Christians have been taught that – they think “Christ” is Jesus’s last name.” — Richard Rohr

4. “Your heart has to be prepared ahead of time through faith and prayer and grace and mercy and love and forgiveness so you can keep your heart open in hell when hell happens.” — Richard Rohr

5. “To believe in Jesus is to believe that the historic person who lived on this earth more than 2000 years ago was the image of the invisible God. That’s a huge leap of faith, but it is my leap of faith, it’s the act of faith of the Christian community.” — Richard Rohr

6. “People who think they can just do a non-stop flight to mystical, non-dual thinking, to get it out without going through the process, are usually not right. That’s airy-fairy thinking. They have to wait until they are hurt themselves, or they are cheated, or lied to, or betrayed, and they will see that their non-dual thinking is not tested, or truly a gift of the spirit. It’s simply fuzzy thinking.” — Richard Rohr

7. “Modern culture is in so much trouble, where people don’t have a deep inner life, or any deep experience of their true self in God, who they were before anyone said anything about them before they received their first medal or ego identification. That`s why suffering is so important because suffering is when those little rewards are taken away from you.” — Richard Rohr

8. “We cannot avoid the globalization of knowledge and information. When I was a boy growing up in Kansas, I could never think about a Buddhist, or a Hindu, or Muslim, or even a Protestant – I grew up in such a Catholic ghetto. That’s not possible anymore unless you live in a cave or something. So either we have knowledge of what the other religions and other denominations are saying, and how they tie into the common thread, or we end up just being dangerously ignorant of other people and therefore prejudiced.” — Richard Rohr

9. “It is the height of idolatry to use the supposed Word of God so that my small self can be in control and be right. But I am afraid this has been more the norm than the exception in the use of the Bible.” — Richard Rohr

10. “Jesus is never upset at sinners; he is only upset with people who do not think they are sinners.” — Richard Rohr

12. “Religion was made to order to “save the world,” to use a phrase Christians use so much, but we really haven’t been doing a good job of it for centuries. It’s heartbreaking really.” — Richard Rohr

13. “Christians are usually sincere and well-intentioned people until you get to any real issues of ego, control power, money, pleasure, and security. Then they tend to be pretty much like everybody else. We often given a bogus version of the Gospel, some fast-food religion, without any deep transformation of the self; and the result has been the spiritual disaster of “Christian” countries that tend to be as consumer-oriented, proud, warlike, racist, class conscious, and addictive as everybody else-and often more so, I’m afraid.” — Richard Rohr

14. “Religions should be understood as only the fingers that point to the moon, not the moon itself.” — Richard Rohr

15. “The real spiritual journey is work. You can make a naïve assertion that you trust in Jesus, but until it is tested a good, oh, 200 times, I doubt very much that it’s true.” — Richard Rohr

16. “The recurring theme of all religions is a sympathy, empathy, connection, capacity between the human and the divine – that we were made for union with one another. They might express this through different rituals, doctrines, dogmas, or beliefs, but at the higher levels, they’re talking about the same goal. And the goal is always union with the divine.” — Richard Rohr

17. “Religion has in fact outdone culture in dualistic thinking – we’ve become as violent, as hateful toward our enemies, damning them to hell and whatever else, that the world doesn’t look to us for wisdom, because we’re trapped in the dualistic mind, instead of the mind of Christ that we were supposed to have.” — Richard Rohr

18. “Either you allow Holy Scriptures to change you, or you will normally try to use it to change–and clobber–other people.” — Richard Rohr

19. “The people who know God well—mystics, hermits, prayerful people, those who risk everything to find God—always meet a lover, not a dictator.” — Richard Rohr

20. “Our culture is almost entirely prepared to not just help you create your false self but to get very identified with it and attached to it. So, without some form of God experience, which teaches you who you are apart from that – we would say in the religious world, who you are “in” God, in the mind and heart of God – there’s almost no way to get out of it.” — Richard Rohr

21. “If God is Trinity and Jesus is the face of God, then it is a benevolent universe. God is not someone to be afraid of, but is the Ground of Being and on our side.” — Richard Rohr

23. “God is always bigger than the boxes we build for God, so we should not waste too much time protecting the boxes.” — Richard Rohr

24. “To the degree, you have experienced intimacy with God, you won’t be afraid of death because you’re experiencing the first tastes and promises of heaven in this world.” — Richard Rohr

25. “Let’s state it clearly: One great idea of the biblical revelation is that God is manifest in the ordinary, in the actual, in the daily, in the now, in the concrete incarnations of life, and not through purity codes and moral achievement contests, which are seldom achieved anyway.” — Richard Rohr

26. “The most amazing fact about Jesus, unlike almost any other religious founder, is that he found God in disorder and imperfection—and told us that we must do the same or we would never be content on this earth.” — Richard Rohr

27. “Everything has to be understood in opposition to something else.” — Richard Rohr

28. “For some dang reason, the ego prefers to make one side better than the other, so we choose.” — Richard Rohr

29. “And we decide males are better than females, America is better than Canada, Democrats are better than Republicans. And for most people, once this decision is made, it is amazing the amount of blindness they become capable of. They really don’t see what’s right in front of them. Once you see this, it’s an amazing breakthrough, and that is the starting place for moving away from dualistic thinking.” — Richard Rohr

30. “The most amazing fact about Jesus, unlike almost any other religious founder, is that he found God in disorder and imperfection—and told us that we must do the same or we would never be content on this earth.” — Richard Rohr

31. “When you do the first half of life well, you have a good sense of yourself.” — Richard Rohr

32. “A good teacher teaches people how to see, not what to see.” — Richard Rohr

34. “Pain that is not transformed is transmitted.” — Richard Rohr

35. “Life is not, nor ever has been, a straight line forward.” — Richard Rohr

36. “Life is characterized much more by exception and disorder than by total or perfect order.” — Richard Rohr

37. “Life is not a matter of creating a special name for ourselves, but of uncovering the name we have always had.” — Richard Rohr

40. “There is a part of you that is Love itself, and that is what we must fall into. It is already there.” — Richard Rohr

41. “Once you move your identity to that level of deep inner contentment, you will realize you are drawing upon a Life that is much larger than your own and from a deeper abundance.” — Richard Rohr

42. “The journey to happiness involves finding the courage to go down into ourselves and take responsibility for what’s there: all of it.” — Richard Rohr

43. “We all become well-disguised mirror image of anything that we fight too long or too directly.” — Richard Rohr

44. “That which we oppose determines the energy and frames the questions after a while.” — Richard Rohr

45. “Most frontal attacks on evil just produce another kind of evil in yourself, along with a very inflated self-image to boot.” — Richard Rohr

46. “When you don’t need to play the victim or create victims you are FREE” — Richard Rohr

47. “Maturity is the ability to joyfully live in an imperfect world.” — Richard Rohr

48. “Famine, poverty, abuse, you can’t keep that all blocked out. If you let those things teach you, influence you, change you, those are the events that transition you without you even knowing it to become more compassionate.” — Richard Rohr

49. “If you stay in the mainstream of life, you let in the suffering of the world that invariably enters all of our lives by the time we’re in our middle years when we’ve experienced a few deaths and read a few headlines.” — Richard Rohr

50. “I think most human beings are dualistic thinkers. It gets them through the day. It gives them a sense of superiority and security – that’s what the ego wants.” — Richard Rohr

What did you learn from these Richard Rohr quotes?

Richard Rohr is a practitioner of Perennial philosophy, a philosophy that believes that all of the world’s religions have branched out from the same original metaphysical truth.

He has written many books on his philosophy and spiritual beliefs, including Everything, Belongs, Adam’s Return, The Naked Now, Breathing Under Water, Falling Upward, Immortal Diamond, and Eager to Love: The Alternative Way of Francis of Assisi, and The Universal Christ.

PBS has named Rohr as “one of the most popular spiritual authors and thinkers in the world.”

Did you enjoy these Richard Rohr quotes and sayings? Which quote was your favorite? Let us know in the comments below.