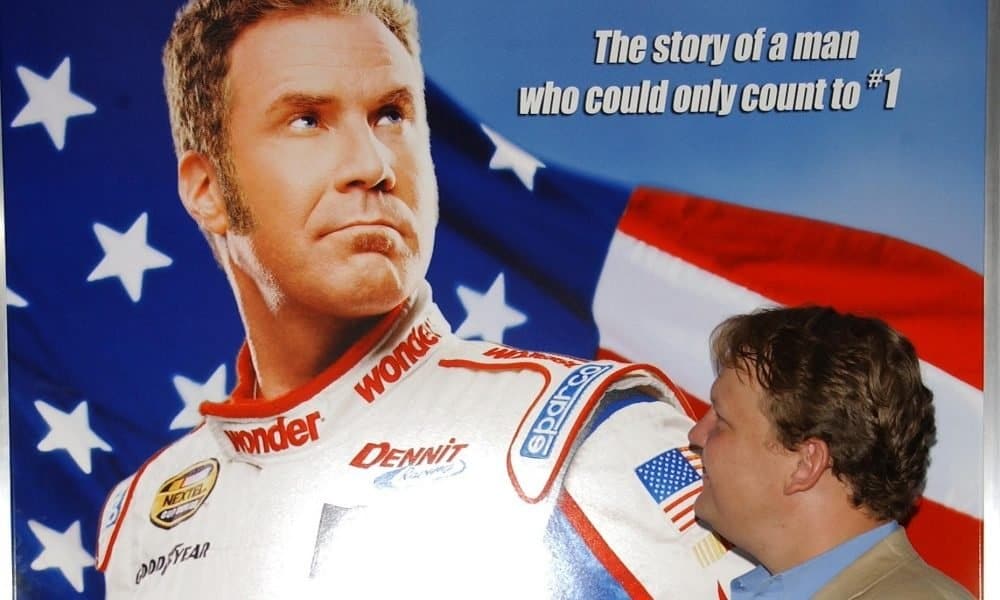 Allow these Ricky Bobby quotes to make you laugh and brighten up your day.

Talladega Nights: The Ballad of Ricky Bobby is a 2006 sports comedy that stars Will Ferrell as Ricky Bobby. Ricky Bobby was raised by his mother and he only saw his father once during his childhood, but he did learn a “need for speed” from his dad.

Ricky Bobby is a parody of the stereotypical redneck, Nascar enthusiast that only cares about going fast. Ricky Bobby is full of laughs, particularly with the relationship he has with his Father, Mother, and best friend. With a hilarious cast of characters, the movie will have you laughing from start to finish.

1. “Well let me just quote the late-great Colonel Sanders, who said”…” I’m too drunk to taste this chicken.” – Ricky Bobby

3. “Cal, that is a new house! It just has a lot of creaks and moans and groans in it!” – Ricky Bobby

8. “I’m embarrassed. I really thought I could feel it.” – Ricky Bobby

13. “Cal, that’s a real nice sentiment. That’s about one of the nicest things you ever said.” – Ricky Bobby

14. “I get emotional. You guys are workin’ so hard, and I’m just so proud of you. You remind me of me, precocious and full of wonderment.” – Ricky Bobby

17. “Susan you gotta watch it when I get into autograph mode!” – Ricky Bobby

19. “I came here to tell you one thing: come race time tomorrow, I’m coming for you.” – Ricky Bobby

22. “My friends and I skipped school and we filled up a cup of pee and tried to get our neighbor’s dog to drink it. But he wouldn’t.” – Walker

29. “I don’t know. How many more times are you gonna toss me the radio while I’m in the bathtub?” – Lucy Bobby

32. “Hundred and five miles an hour! Can you believe that!” – Reese Bobby

34. “Now, there’s nothing like driving to avoid jail. Nothing hones your mind and your instincts like necessity. So I taped a kilo of cocaine underneath the car and called the boys in blue. Now, the way I figure it, you got about two minutes before they show up and you do 5 to 10. So, what’s it going to be? Fear or prison?” – Reese Bobby

35. “Real simple, son… cops are coming, there’s a kilo of Colombian bam-bam under the car. Time to be a man. You got hair on your peaches or what?” – Reese Bobby

38. “I tell you what, Ricky, you are truly blessed. These two are two in a million, just like Carley’s ta-tas. You won’t find another rack like that, I guarantee it.” – Cal Naughton, Jr.

41. “Remember that time in tenth grade when we got kicked out of class for playing with Matchbox cars? Who’s the retard now?” – Cal Naughton, Jr.

42. “Like the frightened baby chipmunk, you are scared by anything that is different.” – Jean Girard

43. “My husband Gregory and I want what any couple wants: to retire to Stockholm and develop a currency for dogs and cats to use.” – Jean Girard

44. “It’s a sign of friendship in many countries.” – Jean Girard

45. “There is nothing sexual about it. Please don’t be worried about the fact that I have an erection. It has nothing to do with you.” – Jean Girard

46. “Ricky… I watched the Highlander movie. It was shit!” – Jean Girard

47. “Soon you will know what it is like to be defeated by the hands of somebody who is truly better than you. As William Blake wrote, “The cut worm forgives the plow”.” – Jean Girard

48. “May God be with you, Monsieur Bobby. Because although today I am friendly. Tomorrow will be war!” – Jean Girard

49. “NO! I will battle you with the entirety of my heart and you will probably lose. But maybe, just maybe. You might challenge me. The Beatles needed the Rolling Stones. Even Diane Sawyer needed Katie Couric. Will you be my Katie Couric?” – Jean Girard

50. “But before I can do that I must be beaten by a driver who is truly better than me.” – Jean Girard

Which of these Ricky Bobby quotes is your favorite?

Ricky Bobby has one goal and that is to be number one. His quote “If you ain’t first, you’re last”, pretty much says everything about how he lives his life. In the movie, Ricky Bobby goes from having everything to having nothing. He loses his house, money, fame, and wife.

In losing everything, he is able to find everything he needs, including a relationship with his father, mother, and kids. His father teaches Ricky to overcome his biggest problem, which is fear.

Once he learns to harness his fear, he drives better than ever and his comeback begins. The best part of Ricky Bobby’s story happens while Ricky is preparing for his comeback to racing and the hilarious situations he encounters.

Did you enjoy these Ricky Bobby quotes and sayings? Which of the quotes is your favorite? Let us know in the comment section below.