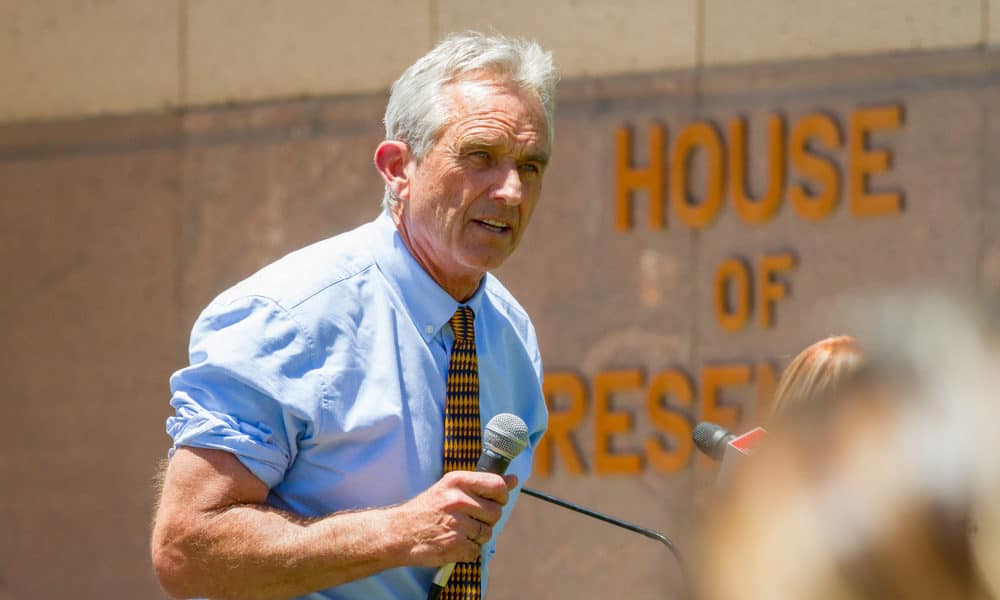 Robert Kennedy, like his brother JFK, was an American politician. Bobby, as he is often referred to, served in the US Naval Reserve, graduated from Harvard, and got his law degree from the University of Virginia. He was also a senator from 1965 until 1968, when sadly, just like his brother, he was assassinated. These Robert Kennedy quotes provide insight into how he felt about government, the law, and life. There is even one about all his siblings!

Robert Kennedy was a prominent member of the democratic party and is viewed as an icon of modern American liberalism. He held some impressive legal jobs, like Chief Counsel of the Senate Labor Rackets Committee. He was active in his brother’s 1952 campaign for senator, and his 1960 campaign for president. When JFK emerged victorious, Bobby was appointed as Attorney General.

Keep reading to learn more about who Robert Kennedy was, and how he shaped a movement.

Don’t forget to also check out these John F. Kennedy quotes on life, politics, and greatness.

Famous Robert Kennedy quotes about the meaning and ramifications of freedom

1. “Whenever men take the law into their own hands, the loser is the law. And when the law loses, freedom languishes.” ― Robert Kennedy

2. “Hand in hand with freedom of speech goes the power to be heard, to share in the decisions of government which shape men’s lives.”― Robert Kennedy

3. “Ultimately, America’s answer to the intolerant man is diversity, the very diversity which our heritage of religious freedom has inspired.” ― Robert Kennedy

4. “The freeway of life proposes ends, but it does not prescribe means.” ― Robert Kennedy

5. “The travail of freedom and justice is not easy, but nothing serious and important in life is easy. The history of humanity has been a continuing struggle against temptation and tyranny – and very little worthwhile has ever been achieved without pain.” ― Robert Kennedy

7. “Freedom possesses many meanings. It speaks not merely in terms of political and religious liberty, but also in terms of economic and social progress.” ― Robert Kennedy

8. “No one needs to tell me about the importance of the free press in a democratic society or about the essential role a newspaper can play in its community.” ― Robert Kennedy

9. “We in the United States believe in the protection of minorities; we recognize the contributions that they can make and the leadership that they can provide, and we do not believe that any people – whether majority or minority or individual human beings – are ‘expendable’ in the cause of theory or of policy.” ― Robert Kennedy

10. “But suppose God is black? What if we go to Heaven and we, all our lives, have treated the Negro as an inferior, and God is there, and we look up and He is not white? What then is our response?” ― Robert Kennedy

11. “Martin Luther King dedicated his life to love and to justice between fellow human beings. He died in the cause of that effort.” ― Robert Kennedy

12. “If any man claims the Negro should be content… let him say he would willingly change the color of his skin and go to live in the Negro section of a large city. Then and only then has he a right to such a claim.” ― Robert Kennedy

14. “Each time a man stands up for an ideal, or acts to improve the lot of others, or strikes out against injustice, he sends forth a tiny ripple of hope and crossing each other from a million different centers of energy and daring, those ripples build a current that can sweep down the mightiest walls of oppression and resistance.” ― Robert Kennedy

15. “Some men see things as they are and ask why. I dream of things that never were and ask why not.” ― Robert Kennedy

16. “Only those who dare to fail greatly can ever achieve greatly.” ― Robert Kennedy

17. “Progress is a nice word. But change is its motivator. And change has its enemies.” ― Robert Kennedy

18. “Tragedy is a tool for the living to gain wisdom, not a guide by which to live.” ― Robert Kennedy

19. “In my judgment, physical fitness is basic to all forms of excellence and to a strong, confident nation.” ― Robert Kennedy

20. “I believe that, as long as there is plenty, poverty is evil.” ― Robert Kennedy

21. “There are people in every time and every land who want to stop history in its tracks. They fear the future, mistrust the present, and invoke the security of a comfortable past which, in fact, never existed.” ― Robert Kennedy

22. “Few will have the greatness to bend history itself; but each of us can work to change a small portion of events, and in the total; of all those acts will be written the history of this generation.” ― Robert Kennedy

23. “Let us dedicate ourselves to what the Greeks wrote so many years ago: to tame the savageness of man and make gentle the life of this world.” ― Robert Kennedy

24. “All of us might wish at times that we lived in a more tranquil world, but we don’t. And if our times are difficult and perplexing, so are they challenging and filled with opportunity.” ― Robert Kennedy

25. “Every generation inherits a world it never made; and, as it does so, it automatically becomes the trustee of that world for those who come after. In due course, each generation makes its own accounting to its children.” ― Robert Kennedy

26. “I was the seventh of nine children. When you come from that far down, you have to struggle to survive.” ― Robert Kennedy

27. “The world of sports knows no religious, racial, or political differences. Athletes, from whatever land they come, speak the same language. The lessons of competition are lessons for life.” ― Robert Kennedy

28. “People say I am ruthless. I am not ruthless. And if I find the man who is calling me ruthless, I shall destroy him.” ― Robert Kennedy

29. “It is not enough to understand or to see clearly. The future will be shaped in the arena of human activity, by those willing to commit their minds and their bodies to the task.” ― Robert Kennedy

30. “Lack of education, old age, bad health, or discrimination – these are causes of poverty, and the way to attack it is to go to the root.” ― Robert Kennedy

31. “One-fifth of the people are against everything all the time.” ― Robert Kennedy

32. “Elections remind us not only of the rights but the responsibilities of citizenship in a democracy.” ― Robert Kennedy

33. “The tyranny of Communism is as old as the Pharaohs and the Pyramids – that the State stands above all men and their individual aspirations.” ― Robert Kennedy

34. “Communism counts its opportunities in terms of decades – not of weeks. Its means of aggression consist not only of nuclear weapons and missiles with enormous boosters, and not only of spies, agents, and terrorists but of great masses of men and women, deluded by a common ideology which inspires them with a false hope.” ― Robert Kennedy

35. “When our forebears – yours and mine – came to America, they came because this country promised them something. It promised them an opportunity, nourished by education, not merely to grind for a bare living, but to strive for a good life.” ― Robert Kennedy

36. “The most significant civil rights problem is voting. Each citizen’s right to vote is fundamental to all the other rights of citizenship, and the Civil Rights Acts of 1957 and 1960 make it the responsibility of the Department of Justice to protect that right.” ― Robert Kennedy

38. “The Gross National Product measures neither our wit nor our courage, neither our wisdom nor our learning, neither our compassion nor our devotion to our country. It measures everything, in short, except that which makes life worthwhile, and it can tell us everything about America – except whether we are proud to be Americans.” ― Robert Kennedy

39. “In truth, the world is now a seamless web from which no nation, large or small, young or old, can disassociate itself. Every attitude and every action of every nation can affect the welfare and security of every other nation around the globe.” ― Robert Kennedy

40. “We will find neither national purpose nor personal satisfaction in a mere continuation of economic progress, in an endless amassing of worldly goods. We cannot measure national spirit by the Dow Jones Average, nor national achievement by the Gross National Product.” ― Robert Kennedy

41. “Yesterday, we fought wars which destroyed cities. Today, we are concerned with avoiding a war which will destroy the earth. We can adapt atomic energy to produce electricity and move ships, but can we control its use in anger?” ― Robert Kennedy

43. “The poor man looks upon the law as an enemy, not as a friend. For him, the law is always taking something away.” ― Robert Kennedy

44. “What has violence ever accomplished? What has it ever created? No martyr’s cause has ever been stilled by an assassin’s bullet. No wrongs have ever been righted by riots and civil disorders. A sniper is only a coward, not a hero; and an uncontrolled or uncontrollable mob is only the voice of madness, not the voice of the people.” ― Robert Kennedy

45. “One of the primary purposes of civilization – and certainly its primary strength – is the guarantee that family life can flourish in unity, peace, and order.” ― Robert Kennedy

47. “The glory of justice and the majesty of law are created not just by the Constitution – nor by the courts – nor by the officers of the law – nor by the lawyers – but by the men and women who constitute our society – who are the protectors of the law as they are themselves protected by the law.” ― Robert Kennedy

48. “Lawyers have their duties as citizens, but they also have special duties as lawyers. Their obligations go far deeper than earning a living as specialists incorporation or tax law. They have a continuing responsibility to uphold the fundamental principles of justice from which the law cannot depart.” ― Robert Kennedy

49. “Every American has the duty to obey the law and the right to expect that the law will be enforced.” ― Robert Kennedy

50. “I believe indeterminate sentencing can be extremely useful, but I also believe that any such system should always take into consideration the special knowledge as to the facts in a case which only the trial judge possesses.” ― Robert Kennedy

What did you learn from these Robert Kennedy quotes?

Robert Kennedy was a sharp legal mind and a progressive thinker. He fought hard for the civil rights movement and believed in the promise of a great America.

His assassination happened before he could complete his bid for presidency. The poor and young voters rallied for him; as did the African American, Hispanic, and Catholic voters, but the world never got to see a RFK presidency.

The brothers shared more than their family and political aspirations. Both of their assassinations have become fodder for conspiracy theories and analysis. Robert Kennedy was shot with a pistol by Sirhan Sirhan, a 24-year-old Palestinian. Sirhan claimed it was in retaliation for Kennedy’s support of Israel following the 1967 Six-Day War. Kennedy died the following morning. Sirhan was subsequently arrested, tried, and convicted.

Some Americans viewed Robert Kennedy as a “ruthless” opportunist. His own father thought he was the child that was most like him, and “hard as nails.” His mother, like the rest of Americans, saw him as a compassionate leader. As we find ourselves in another time of division as a country, I wonder what Robert Kennedy would have to say.

What’s your biggest takeaway from these Robert Kennedy quotes and sayings? Feel free to leave any other RFK quotes in the comment section below.