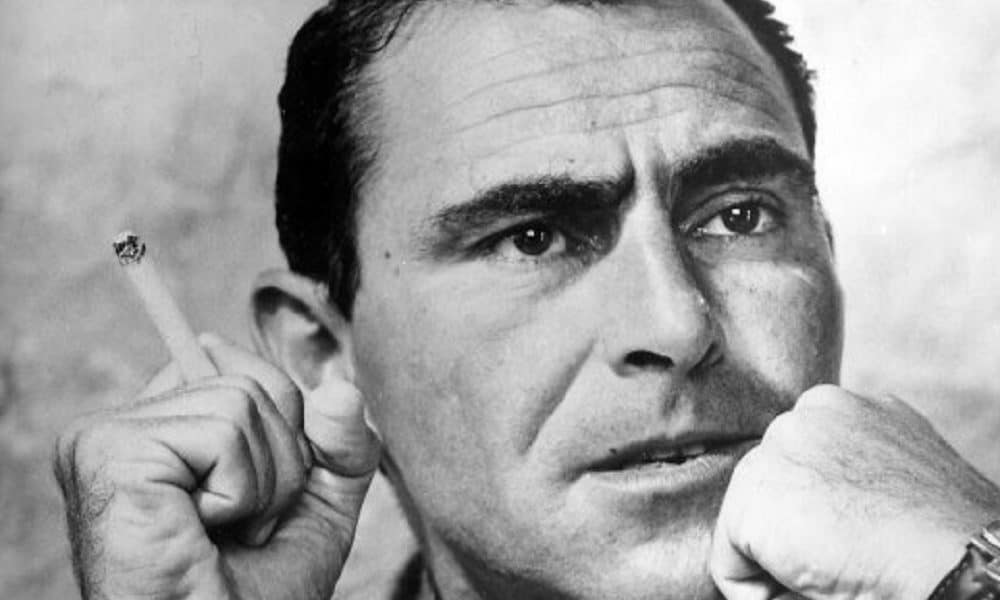 Rodman Serling, the creator of The Twilight Zone, was an American screenwriter, playwright, television producer, and narrator. The live television drama first aired in 1959 on CBS. Serling incorporated his personal experiences with boxing, military life, and piloting airplanes into the scripts for the science fiction show. The show also gave him an avenue to express his views on race relations, gender roles, and other social issues. These Rod Serling quotes also express his views on writing, life, and Hollywood.

People called him the “angry young man” of Hollywood because he frequently fought with television executives and sponsors over censorship, racism, and war.

The Twilight Zone aired for five seasons and won many television and drama awards. It also drew critical acclaim and had loyal fans, however, it only garnered moderate ratings. In fact, it was canceled twice but was then revived by the network.

The series consisted of156 episodes, 92 of which were written by Serling. By 1964, he had grown bored of the show and decided not to fight the third cancellation of the series. Keep reading for Rod Serling quotes directly from The Twilight Zone.

Don’t forget to also check out these Hugh Hefner quotes from the infamous playboy.

1. “We’re developing a new citizenry. One that will be very selective about cereals and automobiles, but won’t be able to think.” — Rod Serling

2. “Hollywood’s a great place to live… if you’re a grapefruit.” — Rod Serling

3. “Television is very much like the weather: Much can be said of it, but very damn little can be done about it.” — Rod Serling

4. “I found that it was all right to have Martians saying things Democrats and Republicans could never say.” — Rod Serling

5. “Fantasy is the impossible made probable. Science fiction is the improbable made possible.” — Rod Serling

6. “How can you put out a meaningful drama when every fifteen minutes proceedings are interrupted by twelve dancing rabbits with toilet paper? No dramatic art form should be dictated and controlled by men whose training and instincts are cut of an entirely different cloth. The fact remains that these gentlemen sell consumer goods, not an art form.” — Rod Serling

7. “Every writer is a frustrated actor who recites his lines in the hidden auditorium of his skull.” — Rod Serling

8. “I find it very difficult to live through the censorship of profanity on television.” — Rod Serling

9. “You unlock this door with the key of imagination. Beyond it is another dimension: a dimension of sound, a dimension of sight, a dimension of mind. You’re moving into a land of both shadow and substance, of things and ideas. You’ve just crossed over into… the Twilight Zone.” — Rod Serling

10. “If in any quest for magic, in any search for sorcery, witchery, legerdemain, first check the human spirit.” — Rod Serling

11. “Every man is put on earth, condemned to die. Time and method of execution unknown.” — Rod Serling

12. “It may be said with a degree of assurance that not everything that meets the eye is as it appears.” — Rod Serling

13. “A small footnote found in the court records of some parallel world. The name of Mitchell Chaplin, who served his sentence of invisibility and learned his lesson well. Too well. This time, however, he will wear his invisibility like a shield of glory. A shield forged in the very heart…of the Twilight Zone.” — Rod Serling

14. “And what I further don’t understand is how little you appreciate the nature of your departure. Think of all the poor souls who go in violent accidents. These are the nonrecognition victim.” — Rod Serling

15. “We are not permitted to forewarn them. You, Mr. Bookman, fall into the category of natural causes.” — Rod Serling

16. “The place is here; the time is now, and the journey into the shadows that we’re about to watch could be our journey.” — Rod Serling

17. “Up there, up there in the vastness of space, in the void that is sky, up there is an enemy known as isolation. It sits there in the stars waiting, waiting with the patience of eons, forever waiting… in the Twilight Zone.” — Rod Serling

18. “To the wishes that come true, to the strange, mystic strength of the human-animal, who can take a wishful dream and give it a dimension of its own. To Barbara Jean Trenton, movie queen of another era, who has changed the blank tomb of an empty projection screen into a private world. It can happen in the Twilight Zone.” — Rod Serling

19. “You are traveling through another dimension, a dimension not only of sight and sound but of mind. A journey into a wondrous land whose boundaries are that of imagination. Your next stop, the Twilight Zone!” — Rod Serling

20. “The writer’s role is to menace the public’s conscience. He must have a position, a point of view. He must see the arts as a vehicle of social criticism, and he must focus on the issues of his time.” — Rod Serling

21. “The writer in any field, and particularly the television writer, runs into dry periods—weeks or months when it seems that everything he writes goes the rounds and ultimately gets nowhere. This is not only a bad moment, but an endless one.” — Rod Serling

22. “I remember a five-month period late in 1952 when my diet consisted chiefly of black coffee and fingernails. I’d written six half-hour television plays, and each one had been rejected at least five times. What this kind of thing does to a family budget is obvious; and what it does to the personality of the writer is even worse.” — Rod Serling

23. “It has forever been thus: So long as men write what they think, then all of the other freedoms—all of them—may remain intact. And it is then that writing becomes a weapon of truth, an article of faith, an act of courage.” — Rod Serling

24. “In eleven or twelve years of writing, Mike, I can lay claim to at least this: I have never written beneath myself. I have never written anything that I didn’t want my name attached to. I have probed deeper in some scripts and I’ve been more successful in some than others. But all of them that have been on, you know, I’ll take my lick. They’re mine, and that’s the way I wanted them.” — Rod Serling

27. “Coming up with ideas is the easiest thing on earth. Putting them down is the hardest.” — Rod Serling

28. “Why do I write? I guess that’s been asked of every writer. I don’t know. It isn’t any massive compulsion.” — Rod Serling

31. “Some people possess talent, others are possessed by it. When that happens, a talent becomes a curse.” — Rod Serling

32. “Justice can span years. Retribution is not subject to a calendar.” — Rod Serling

33. “Being like everybody is the same as being nobody.” — Rod Serling

34. “Imagination… its limits are only those of the mind itself.” — Rod Serling

35. “For civilization to survive, the human race has to remain civilized.” — Rod Serling

36. “But like every one of the super-states that preceded it—it has one iron rule: logic is an enemy, and truth is a menace.” — Rod Serling

37. “There is nothing in the dark that isn’t there when the lights are on.” — Rod Serling

38. “Our greatest responsibility is not to be pencils of the past.” — Rod Serling

39. “If you write, fix pipes, grade papers, lay bricks, or drive a taxi—do it with a sense of pride. And do it the best you know-how. Be cognizant and sympathetic to the guy alongside, because he wants a place in the sun, too. And always… always look past his color, his creed, his religion, and the shape of his ears. Look for the whole person. Judge him as the whole person.” — Rod Serling

40. “If you want to prove that God is not dead, first prove that man is alive.” — Rod Serling

41. “The ultimate obscenity is not caring, not doing something about what you feel, not feeling! Just drawing back and drawing in, becoming narcissistic.” — Rod Serling

42. “Someplace between apathy and anarchy is the stance of the thinking human being; he does embrace a cause; he does take a position, and can’t allow it to become business as usual. Humanity is our business.” — Rod Serling

43. “According to the Bible, God created the heavens and the Earth. It is man’s prerogative—and woman’s—to create their own particular and private hell.” — Rod Serling

44. “I happen to think that the singular evil of our time is prejudice. It is from this evil that all other evils grow and multiply. In almost everything I’ve written, there is a thread of this man’s seemingly palpable need to dislike someone other than himself.” — Rod Serling

45. “If survival calls for the bearing of arms, bear them you must. But the most important part of the challenge is for you to find another means that does not come with the killing of your fellow man.” — Rod Serling

46. “You see, we can feed the stomach with concentrates, we can supply microfilm for reading, recreation, even movies of a sort, we can pump oxygen in, and waste material out, but there’s one thing we can’t simulate. That’s a very basic need. Man’s hunger for companionship. The barrier of loneliness, that’s one thing we haven’t licked yet.” — Rod Serling

48. “This is not a new world—it is simply an extension of what began in the old one. It has patterned itself after every dictator who has ever planted the ripping imprint of a boot on the pages of history since the beginning of time. It has refinements… technological advances… and a more sophisticated approach to the destruction of human freedom.” — Rod Serling

49. “And if we don’t listen to that scream—and if we don’t respond to it—we may well wind up sitting amidst our own rubble, looking for the truck that hit us, or the bomb that pulverized us. Get the license number of whatever it was that destroyed the dream. And I think we will find that the vehicle was registered in our own name.” — Rod Serling

What did you learn from these Rod Serling quotes?

Serling didn’t just use The Twilight Zone to express his opinions, he was was active in politics off-screen as well. Serling’s strong opinions about the use of military force, and war in general, came from his time as a soldier. His division fought in the Philippines in 1944, against the Japanese rather than the German soldiers. Not only did the theme of antiwar make it into his writing but he was an outspoken antiwar activist during the Vietnam War.

He also was against prejudice, bigotry, and hate, as evidenced in A Town Has Turned to Dust. The film received a positive review from Jack Gould, a film critic known for being harsh in his reviews. He said the film was, “a raw, tough, and at the same time deeply moving, outcry against prejudice.”

Rod Serling also wrote Night Gallery for NBC but declined an offer for an executive position, which meant he didn’t have much say when it came to creative control. After The Twilight Zone, he also tried his hand at a western, The Loner, that was unsuccessful. He appeared in several commercials and continued to work on radio.

Tell us which Rod Serling work you liked the most using the comment section below. Don’t forget to also mention any other favorite Rod Serling quotes and sayings.