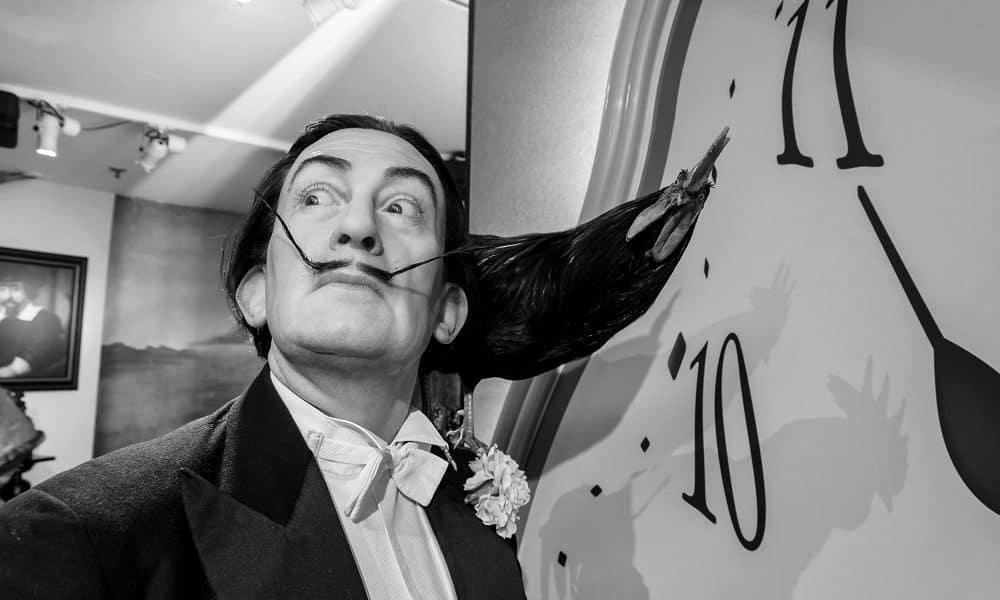 These Salvador Dali quotes illustrate how he felt about art, life, and himself. Keep reading to learn more about this master artist and Surrealism.

Salvador Domingo Felipe Jacinto Dalí i Domènech was a Spanish surrealist artist, who received a formal education in fine arts in Madrid. His technical skill and precision draftsmanship coupled with the bizarre images he created led to his becoming a world-renowned artist. He was also the 1st Marquess of Dalí de Púbol.

Surrealism was an artistic and literary movement founded by poet André Breton in Paris in 1924. It theorized that the Enlightenment—the 17th- and 18th-century intellectual movement focused on reason and individualism—had suppressed other qualities. Breton believed these were the superior qualities of the irrational, unconscious mind.

From a young age, Impressionism and Renaissance masters influenced Dali’s work. He also became increasingly attracted to Cubism and avant-garde movements. In the late 1920s, these interests had moved him closer to Surrealism. In 1929, he joined the Surrealist group, quickly becoming one of its leading figures.

Don’t forget to also check out these art quotes celebrating the power and beauty of creation.

1. “A true artist is not one who is inspired, but one who inspires others.” ― Salvador Dalí

2. “Drawing is the honesty of the art. There is no possibility of cheating: It is either good or bad.” ― Salvador Dalí

3. “This grandiose tragedy that we call modern art.” ― Salvador Dalí

4. “We are all hungry and thirsty for concrete images. Abstract art will have been good for one thing: to restore its exact virginity to figurative art.” ― Salvador Dalí

5. “Begin by learning to draw and paint like the old masters. After that, you can do as you like; everyone will respect you.” ― Salvador Dalí

6. “People love mystery, and that is why they love my paintings.” ― Salvador Dalí

7. “I do not paint a portrait to look like the subject, rather does the person grow to look like his portrait.” ― Salvador Dalí

8. “If you understand your painting beforehand, you might as well not paint it.” ― Salvador Dalí

9. “Progressive art can assist people to learn not only about the objective forces at work in the society in which they live but also about the intensely social character of their interior lives. Ultimately, it can propel people toward social emancipation.” ― Salvador Dalí

10. “The reason some portraits don’t look true to life is that some people make no effort to resemble their pictures.” ― Salvador Dalí

11. “Surrealism is destructive, but it destroys only what it considers to be shackles limiting our vision.” ― Salvador Dalí

12. “Surrealism is not a movement. It is a latent state of mind, perceivable through the powers of dream and nightmare.” ― Salvador Dalí

13. “Instead of stubbornly attempting to use surrealism for purposes of subversion, it is necessary to try to make of surrealism something as solid, complete, and classic as the works of museums.” ― Salvador Dalí

14. “Life is too short to remain unnoticed.” ― Salvador Dalí

17. “What is important is to spread confusion, not eliminate it.” ― Salvador Dalí

19. “You have to systematically create confusion; it sets creativity free. Everything that is contradictory creates life.” ― Salvador Dalí

20. “Mistakes are almost always of a sacred nature. Never try to correct them. On the contrary: rationalize them, understand them thoroughly. After that, it will be possible for you to sublimate them.” ― Salvador Dalí

21. “No masterpiece was ever created by a lazy person.” ― Salvador Dalí

22. “Knowing how to look is a way of inventing.” ― Salvador Dalí

23. “Don’t bother about being modern. Unfortunately, it is the one thing that, whatever you do, you cannot avoid.” ― Salvador Dalí

24. “Repulsion is the sentry that guards the gate to all that we most desire.” ― Salvador Dalí

25. “Intelligence without ambition is a bird without wings.” ― Salvador Dalí

26. “In order to acquire a growing and lasting respect in society, it is a good thing, if you possess great talent, to give, early in your youth, a very hard kick to the right shin of the society that you love. After that, be a snob.” ― Salvador Dalí

27. “The secret of my influence has always been that it remained secret.” ― Salvador Dalí

28. “The thermometer of success is merely the jealousy of the malcontents.” ― Salvador Dalí

Salvador Dali quotes about himself

29. “Each morning I wake and I experience again a supreme pleasure, the pleasure of being Salvador Dali.” ― Salvador Dalí

30. “There is only one difference between a madman and me. The madman thinks he is sane. I know I am mad.” ― Salvador Dalí

32. “Since I don’t smoke, I decided to grow a mustache—it is better for the health. However, I always carried a jewel-studded cigarette case in which, instead of tobacco, were carefully placed several mustaches, Adolphe Menjou style. I offered them politely to my friends: ‘Mustache? Mustache? Mustache?’” ― Salvador Dalí

33. “Everything alters me, but nothing changes me.” ― Salvador Dalí

35. “I want to perceive and understand the hidden powers and laws of things, in order to have them in my power.” ― Salvador Dalí

36. “Give me two hours a day of activity, and I’ll take the other twenty-two in dreams.” ― Salvador Dalí

37. “There are some days when I think I’m going to die from an overdose of satisfaction.” ― Salvador Dalí

40. “An elegant woman is a woman who despises you and has no hair under her arms.” ― Salvador Dalí

41. “The first man to compare the cheeks of a young woman to a rose was obviously a poet; the first to repeat it was possibly an idiot.” ― Salvador Dalí

42. “The difference between false memories and true ones is the same as for jewels: it is always the false ones that look the most real, the most brilliant.” ― Salvador Dalí

43. “So little of what could happen does happen.” ― Salvador Dalí

44. “Those who do not want to imitate anything, produce nothing.” ― Salvador Dalí

45. “It’s better to have loved and lost than do forty pounds of laundry a week.” ― Salvador Dalí

46. “The one thing the world will never have enough of is the outrageous.” ― Salvador Dalí

47. “It is good taste, and good taste alone, that possesses the power to sterilize and is always the first handicap to any creative functioning.” ― Salvador Dalí

49. “Let my enemies devour each other.” ― Salvador Dalí

50. “One day it will have to be officially admitted that what we have christened reality is an even greater illusion than the world of dreams.” ― Salvador Dalí

What did you learn from these Salvador Dali quotes?

Salvador Dali’s best-known work, The Persistence of Memory, was completed in August 1931. The painting features several clocks that appear to be melting in a bleak dreamscape and is one of the most famous Surrealist paintings.

He did more than just paintings, though. His artistic work also included graphic art, film, sculpture, and photography. He was also a writer of fiction, poetry, and essays. His work featured themes that included dreams, the human subconscious, sexuality, religion, and science.

His eccentric behavior often drew more attention than his artwork, much to the dismay of those who held his work in high regard. Tell us which piece of artwork you most admire of Dali’s in the comment section below, along with any other favorite Salvador Dali quotes and sayings.