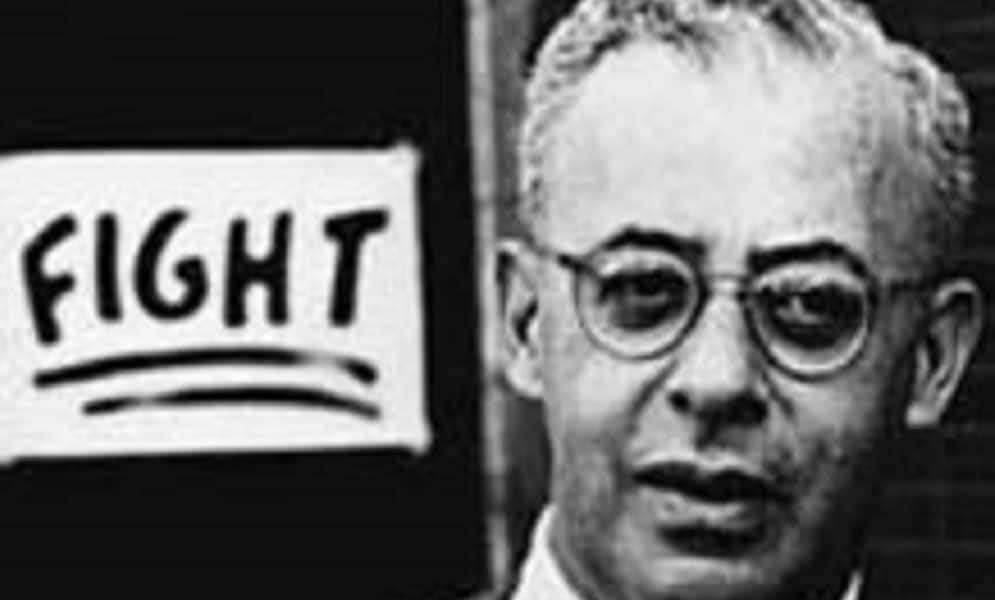 Saul Alinksy is the father of community organizing and a self-proclaimed radical. Here are some of our favorite Saul Alinsky quotes.

Saul Alinksy was a political theorist and community activist. He spent his life advocating for poor communities and influencing landlords, politicians, and business leaders to contribute to positive progress. He was an activist who used both confrontation and compromise in his struggle for justice.

Alinsky saw that if one were to organize ordinary citizens, labor unions, churches, and small businesses who all had the same grievances, their revolution would be pretty much unstoppable. He spent his life organizing “radicals” in an effort to promote positive change.

Don’t forget to also check out these protest and activism quotes to inspire you to action.

2. “If you push a negative hard enough, it will push through and become a positive.” — Saul Alinsky

5. “If people don’t think they have the power to solve their problems, they won’t even think about how to solve them.” — Saul Alinsky

6. “The organizer’s first job is to create the issues or problems, and organizations must be based on many issues. The organizer must first rub raw the resentments of the people of the community; fan the latent hostilities of many of the people to the point of overt expression. He must search out controversy and issues, rather than avoid them, for unless there is controversy people are not concerned enough to act. . . . An organizer must stir up dissatisfaction and discontent.” — Saul Alinsky

8. “Tactics mean doing what you can with what you have.” — Saul Alinsky

9. “In the beginning, the organizer’s first job is to create the issues or problems.” —Saul Alinsky

10. “The most effective means are whatever will achieve the desired results.” — Saul Alinsky

11. “Any revolutionary change must be preceded by a passive, affirmative, non-challenging attitude toward change among the mass of our people. They must feel so frustrated, so defeated, so lost, so futureless in the prevailing system that they are willing to let go of the past and change the future. This acceptance is the reformation essential to any revolution.” — Saul Alinsky

12. “Organization for action will now and in the decade ahead center upon America’s white middle class. That is where the power is.” — Saul Alinsky

13. “The practical revolutionary will understand Goethe’s ‘conscience is the virtue of observers and not of agents of action’; in action, one does not always enjoy the luxury of a decision that is consistent both with one’s individual conscience and the good of mankind.” — Saul Alinsky

14. “In a fight, almost anything goes. It almost reaches the point where you stop to apologize if a chance blow lands above the belt.” — Saul Alinsky

15. “One acts decisively only in the conviction that all the angels are on one side and all the devils on the other.” — Saul Alinsky

16. “The enemy properly goaded and guided in his reaction will be your major strength.” — Saul Alinsky

18. “A Marxist begins with his prime truth that all evils are caused by the exploitation of the proletariat by the capitalists. From this, he logically proceeds to the revolution to end capitalism, then into the third stage of reorganization into a new social order of the dictatorship of the proletariat, and finally the last stage – the political paradise of communism.” – Saul Alinsky

19. “Curiosity and irreverence go together. Curiosity cannot exist without the other. Curiosity asks, “Is this true?” “Just because this has always been the way, is the best or right way of life, the best or right religion, political or economic value, morality?” To the questioner, nothing is sacred. He detests dogma, defies any finite definition of morality, rebels against any repression of a free, open search of ideas no matter where they may lead. He is challenging, insulting, agitating, discrediting. He stirs unrest.” – Saul Alinsky

20. “I prize my own independence too much. And philosophically, I could never accept any rigid dogma or ideology, whether it’s Christianity or Marxism…The greatest crimes in history have been perpetrated by such religious and political and racial fanatics, from the persecutions of the Inquisition on down to Communist purges and Nazi genocide.” – Saul Alinsky

21. “Organized business has assumed that greater profits would be pretty much of a cure-all, and it has to a major extent ignored the fact that the welfare of business rests upon the welfare of the consumers of a nation; that business or free enterprise will function in a democracy only so long as the democracy functions.” – Saul Alinsky

22. “Democracy is alive, and like any other living thing, it either flourishes and grows or withers and dies. There is no in-between. It is freedom and life or dictatorship and death.” – Saul Alinsky

23. “True revolutionaries do not flaunt their radicalism. They cut their hair, put on suits, and infiltrate the system from within.” – Saul Alinsky

24. “Lest we forget at least an over the shoulder acknowledgment to the very first radical: from all our legends, mythology, and history (and who is to know where mythology leaves off and history begins – or which is which), the very first radical known to man who rebelled against the establishment and did it so effectively that he at least won his own kingdom – Lucifer.” – Saul Alinsky

25. “Let the liberal turn to the course of action, the course of all radicals, and the amused look vanishes from the face of society as it snarls, “That’s radical!” Society has good reason to fear the radical. Every shaking advance of mankind toward equality and justice has come from the radical. He hits, he hurts, he is dangerous.” – Saul Alinsky

27. “Do one of three things. One, go and find a wailing wall and feel sorry for yourselves. Two, go psycho and start bombing — but this will only swing people to the right. Three, learn a lesson. Go home, organize, build power and at the next convention, you be the delegates.” – Saul Alinsky

29. “Our rebels have contemptuously rejected the values and the way of life of the middle class. They have stigmatized it as materialistic, decadent, bourgeois, degenerate, imperialistic, war-mongering, brutalized, and corrupt. They are right, but we must begin from where we are if we are to build power for change, and the power and the people are in the middle-class majority.” – Saul Alinsky

30. “Radicals, on the other hand, want to advance from the jungle of laissez-faire capitalism to a world worthy of the name of human civilization. They hope for a future where the means of economic production will be owned by all of the people instead of just a comparative handful. They feel that this minority control of production facilities is injurious to the large masses of people not only because of economic monopolies but because the political power inherent in this form of centralized economy does not augur for an ever-expanding democratic way of life.” – Saul Alinsky

31. “Change means movement. Movement means friction. Only in the frictionless vacuum of a nonexistent abstract world can movement or change occur without that abrasive friction of conflict.” – Saul Alinsky

32. “The cry of the Have-Nots has never been “give us our hearts,” but always “get off our backs”; they ask not for love but for breathing space.” – Saul Alinsky

34. “We must believe that it is the darkest before the dawn of a beautiful new world. We will see it when we believe it.” – Saul Alinsky

36. “Asking a sociologist to solve a problem is like prescribing an enema for diarrhea.” – Saul Alinsky

38. “The establishment can accept being screwed, but not being laughed at.” – Saul Alinsky

39. “The greatest enemy of individual freedom is the individual himself.” – Saul Alinsky

40. “It is a world not of angels but of angles, where men speak of moral principles but act on power principles; a world where we are always moral and our enemies always immoral.” – Saul Alinsky

41. “Whenever possible, go outside the expertise of the enemy.” – Saul Alinsky

42. “It is a sad fact of life that power and fear are the fountainheads of faith.” – Saul Alinsky

43. “My only fixed truth is a belief in people, a conviction that if people have the opportunity to act freely and the power to control their own destinies, they’ll generally reach the right decisions.” – Saul Alinsky

44. “Do you like people? Most people claim that they like people with, of course, a “few exceptions.” When the exceptions are added together it becomes clear that they include a vast majority of the people. It becomes equally clear that most people like just a few people, their kind of people, and either do not actively care for or actively dislike most of the “other” people.” – Saul Alinsky

46. “Human beings do not like to look squarely into the face of tragedy. Gloom is unpopular.” – Saul Alinsky

47. “Power is not only what you have but what the enemy thinks you have.” – Saul Alinsky

48. “A racially integrated community is a chronological term timed from the entrance of the first black family to the exit of the last white family.” – Saul Alinsky

49. “Life is an adventure of passion, risk, danger, laughter, beauty, love; a burning curiosity to go with the action to see what it is all about, to go search for a pattern of meaning, to burn one’s bridges because you’re never going to go back anyway, and to live to the end.” – Saul Alinsky

50. “The human spirit glows from that small inner light of doubt whether we are right, while those who believe with certainty that they possess the right are dark inside and darken the world outside with cruelty, pain, and injustice.” – Saul Alinsky

What did you learn from these Saul Alinsky quotes?

Alinsky wrote his first book, Reveille for Radicals while serving a term in jail in 1946, and Rules for Radicals in 1971 a year before his death. Both books left behind Alinksy’s legacy as an organizer, inspiring future generations of “radicals” to gather the people and fight for social justice.

Alinsky died in 1972 from a heart attack. He was still organizing activities up to the time of his death. Alinsky was a believer in the power of the people. He saw that American democracy could bring about justice as long as it was organized properly.

Which Saul Alinsky quotes and sayings are your favorite? Let us know in the comments below.