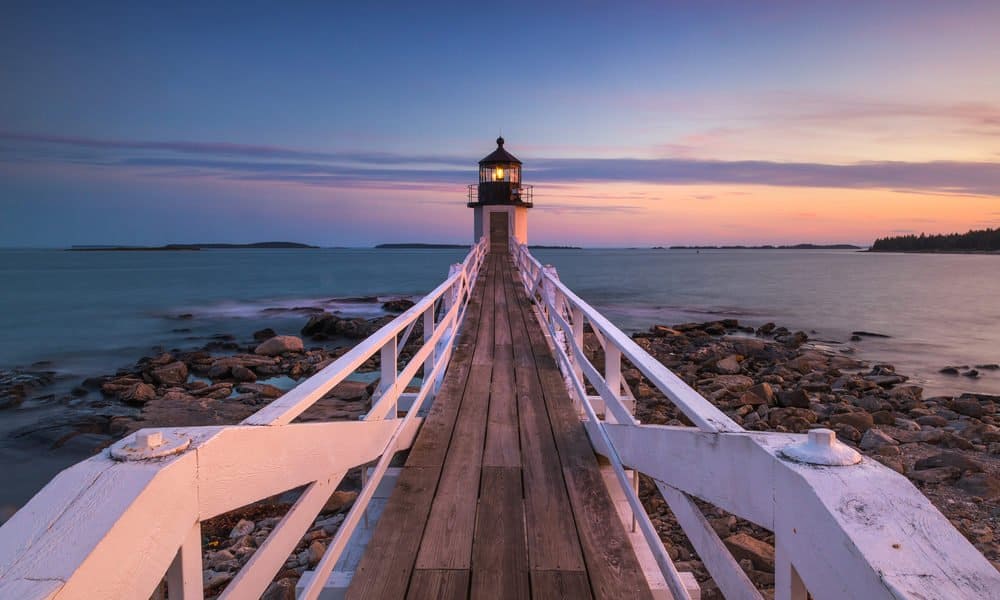 The Lighthouse is a 2019 creepy psychological thriller that was an international co-production between the US and Canada. The film mirrors many Poe elements but is more of a contemporary piece. The movie stars Robert Pattinson and William Dafoe, as Thomas Wake and Ephraim Winslow, a pair of lighthouse keepers. Many of these, The Lighthouse quotes come from conversations the men have as they slowly go mad from isolation and fear after a storm.

The story is filled with intrigue and secrets, like every good psychological thriller should be. If you haven’t seen the movie already, you might want to because some of these, The Lighthouse quotes might spoil it!

The writers, brothers Robert and Max Eggers, do a splendid job making this movie weird enough to give it that creepy vibe, but relatable enough to leave you on edge, wondering just how you would react if you were trapped on a secluded island and no one was being honest.

‘The Lighthouse’ quotes about Ephraim’s workload and responsibilities

1. “The cistern needs a looking to. One of your duties, lad. Or didn’t you read yourself about it? You’ll clean the brass and the clockwork, and you tidy the quarters after. There’s well more to be mended outside. You hear me, lad?” — Thomas Wake

2. Thomas Wake: “When the fog clears, you’ll work through the dog watch.”

4. “I said catch your breath, lad. Then bring that drum back down the ladder well where you found it. Unless you’re fixing to burn the whole light down. Then see to the rest of your duties. You’re behindhand already.” — Thomas Wake

Ephraim Winslow: “I mopped and swept twice, I was…”

Ephraim Winslow: “I swept them..”

6. “And I say you did nothing of the sort! And I say, you swab it again, and you swab it proper-like this time, and then you’ll be swabbing it ten times more after that. And if I tell you to pull up and apart every floorboard and clapboard of this here house and scour them down with your bare, bleeding knuckles, you’ll do it! And if I tell you to yank out every single nail from every moldering nail-hole and suck off every spec of rust till all them nails sparkle like a sperm whale’s pecker, and then carpenter the whole light station back together from scrap, and then, do it all over again, you’ll do it! And by God and by Golly, you’ll do it smiling, lad, cause you’ll like it. You’ll like it because I say you will! Contradict me again, and I’ll dock your wages. You hear me, lad?” — Thomas Wake

7. “Whitewash must be even, lad. Bright! Shining! Like a silver whorehouse token. Give them sailors a proper daymark.” — Thomas Wake

8. “Get to your duties, or I’ll give you a real keelhauling.” — Thomas Wake

9. “Pay me no mind, lad. None. Fix us up some coffee. Long night ahead. Drop of coffee will do us good.” — Thomas Wake

‘The Lighthouse’ quotes about the sea

11. “Should pale death, with treble dread, make the ocean caves our bed, God who hears the surges roll, deign to save the suppliant soul. To four weeks.” — Thomas Wake

12. “The Chicopee, a fine one, she were. Clean-built and trig-looking! None more fleet in ‘64 than she. We were on the breaks, a mutiny it were. Why ask you? Why? What’s the terrible part of a sailor’s life, ask you, lad? Tis when the work stops when your twixt wind and water. Doldrums. Doldrums. Eviler than the Devil. Boredom makes men to villains, and the water goes quick, lad. Vanished. The only medicine is drink. Keeps them sailors happy, keeps them agreeable, keeps them calm, keeps them…” — Thomas Wake

13. “I seen you sparring with a gull. Best leave them be. Bad luck to kill a seabird.” — Thomas Wake

14. Ephraim Winslow: “You ever married?”

Thomas Wake: “Thirteen Christmases at sea, little ones at home. She never forgave it. Tis for the better.”

15. “In ‘75 ‘Ol Striker were marooned here for seven long months, he was. The storm died on the mainland, but here, the waters were too rageful neither to launch nor land.” — Thomas Wake

16. “Can’t say I blame you. I heard tell about that life. Hard going. Work one man harder than two horses, they say. No thankee. The sea, she’s the only situation wanting for me.” — Thomas Wake

‘The Lighthouse’ quotes that make you laugh

18. “Now look here, I ain’t never intended to be no housewife nor slave in taking this job. It ain’t right! These lodgings is more ramshackle than any shanty boy’s camp I ever seen. The queen of England’s own fancy housekeeper couldn’t do no better than what I done, because I tell you, I scrubbed this here place twice over, sir…” — Ephraim Winslow

Thomas Wake: “A man what don’t drink, best have his reasons.”

20. “Since we’re getting too friendly, Ephraim Winslow, tell me, what’s a timberman want with being a wickie? Not enough quiet for you up north? Sawdust itching your nethers? Foreman found you too high-tempered for carrying an axe?” — Thomas Wake

Thomas Wake: “No, it ain’t. And I ain’t wanting to be stranded here with some damned lunatic.”

23. “You’ve been drunk since I first laid eyes on you.” — Ephraim Winslow

25. “Just, it seems powerful hard to eat grass with no teeth. Goats and sheeps and cows. Now, they all got teeth, don’t they?” — Ephraim Winslow

26. “And a pretty lass, she were, taking off her bonnet. But as I says, I broke me leg and banged myself all up. It was to a nun’s hospital. All of them nuns were Catholics, I tell you.” — Thomas Wake

‘The Lighthouse’ quotes about the light

29. Ephraim Winslow: “What made your last keeper leave?”

Thomas Wake: “Him? My second?”

Thomas Wake: “Aye, went mad, he did. Raving about sirens, merfolk, bad omens, and the like. In the end, weren’t no more sense left in him than a hen’s tooth. He believed that there was some enchantment in the light. He notioned that St. Elmo had cast his very fire into it. Salvation said he.”

30. “But I can’t be dragging me old stump about. Nay, not worth the trouble. Now, I’m a wickie, and a wickie I is. And I’m damn-well wedded to this here light, and she’s been a finer, truer, quieter wife than any a live-blooded woman.” — Thomas Wake

31. “Just like any man, trying to settle down quiet-like with some earnings. I read some place that a could earn six hundred and thirty, or I read one thousand dollars a year, if he tends a light far offshore. The further away, the more he earns. I read that, and now I says, ‘Work. Save my earnings.’ Sometime soon, I’ll raise my own roof, somewhere upcountry, with no one to tell me what for. That’s all.” — Ephraim Winslow

32. “Well, I’ll say it. I might even miss ye, Ephraim Winslow, you’re fastly a true blue wickie in the making, you is. Thought one night you was bound to split me skull in twain, but you’re a good-un. Why you’ll be working the lamp in no time.” — Thomas Wake

‘The Lighthouse’ quotes about the rock and island

Ephraim Winslow: “Such as what?”

Thomas Wake: “Pretty as a picture.”

34. Thomas Wake: “Winslow. What brung you to this rock, Ephraim Winslow? What were your work before?”

35. “Now, don’t be so darn foolish. It’s the calm before the storm, Winslow. She were a gentle westerly wind you’re cursing. Only feels roughly because you don’t know nothing about nothing, and there ain’t no trees on this here rock like your Hudson Bay bush. Nor’Easterly wind will come soon a-blowing like Gabriel’s horn. Best board up them signal house winders.” — Thomas Wake

37. “Something stirring in you? You’re getting off this island tomorrow, Winslow, Don’t start grudging me now.” — Thomas Wake

The Lighthouse quotes from conversations between Thomas and Ephraim

38. Thomas Wake: “Ah, find some chirk in you, lad. Now is the time for gab and chatter. Best be enjoying it. Come a fortnight, the brace of us will be wanting to be ever silent as the tomb.”

Ephraim Winslow: “I ain’t much for talking.”

39. “Curse me if there ain’t an old tar spirit somewheres in you, lad.” — Thomas Wake

41. Ephraim Winslow: “You feel shame when you lie with a woman?”

Thomas Wake: “I ain’t shamed of nothing!”

Ephraim Winslow: “Not as often as I might. But I’m God fearing, if that’s what you’re asking.”

44. “Ain’t no crime to take a snort now. A clear night, and our last afore relief, I never known an inspector what wouldn’t turn a blind eye. And I won’t take no for an answer.” — Thomas Wake

45. “I told that dumb bastard, “Give me your can’t hook,” I says to him. But foreman Winslow, goddamned candy bastard Winslow, was always calling me a dog. A filthy dog.” — Ephraim Winslow

47. “Look, maybe the tender did come. We just missed her, is all. I can take the dory out.” — Ephraim Winslow

48. “You think you’re so high and mighty because you’re a damned lighthouse keeper?” — Ephraim Winslow

Which of The Lighthouse quotes is your favorite?

The movie began as an undertaking by Max Eggers to finish a partial Edgar Allen Poe story, titled “The Light-House.” However, when the project hit a roadblock, Max’s brother Robert offered to help.

The film is shot in black and white, even though it was released in 2019. They also shot it using a narrow ratio that can hide things from the audience. The aesthetics of the film contribute to its sense of secrecy.

The Lighthouse was nominated for Best Cinematography at the 92nd Academy Awards and 73rd British Academy Film Awards. It won several other awards as well and has an approval rating of 90% on Rotten Tomatoes, 8.05/10. When you just read the plot, it seems like it is way out there, but Rotten Tomatoes critics have this to say: “A gripping story brilliantly filmed and led by a pair of powerhouse performances, The Lighthouse further establishes Robert Eggers as a filmmaker of exceptional talent.”

Did you enjoy reading this collection of The Lighthouse quotes and lines? What did you think of the movie? Share your thoughts in the comment section below!