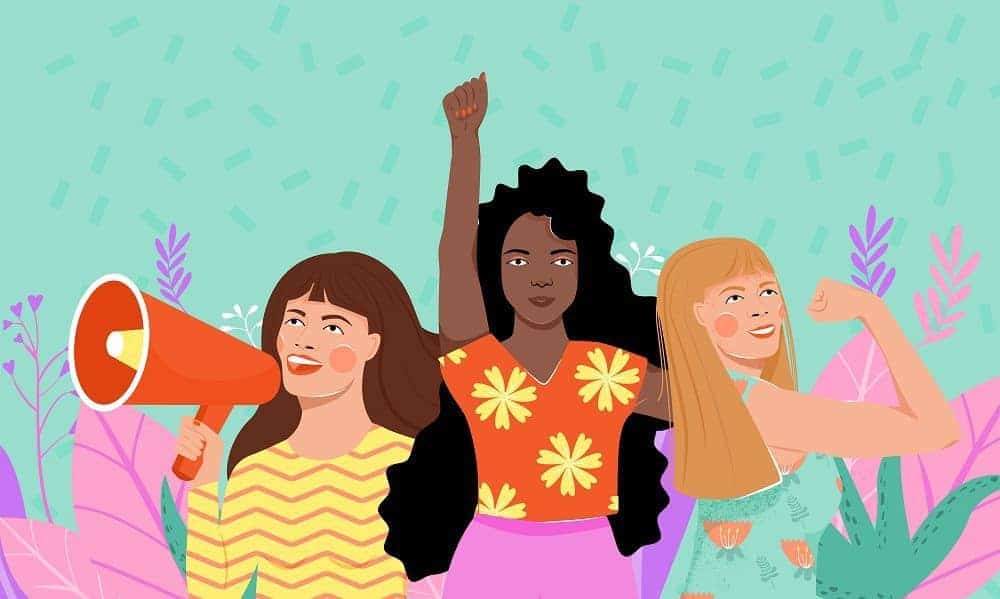 Our latest collection of inspirational feminism quotes to make you feel empowered.

Throughout history, women have been battling against patriarchy and a predominately misogynistic society. Women have banded together to fight for their right to vote, combat discrimination, disband rape culture and portrayal in the media, and reprimand crimes against the female gender.

Feminists have won some great victories, but the battle for gender equality has evolved into a powerful movement with ambitious feminists leading the charge.

The most recent #MeToo campaign has been shedding light on discrimination and exposing the predation of women in the entertainment industry. It has offered a necessary outlet for victims of sexual assault and opportunities for more women and men to learn about and align with feminism.

It takes a courageous person to fight injustices and speak up for what is right. To help fuel your feminist flame, below is our collection of inspirational, wise, and powerful feminism quotes, feminism sayings, and feminism proverbs, collected from a variety of sources.

Feminism quotes about empowerment and equality for women

3. “We need to encourage girls that their voice matters. I think there are hundreds and thousands of Malalas out there.” – Malala Yousafzai 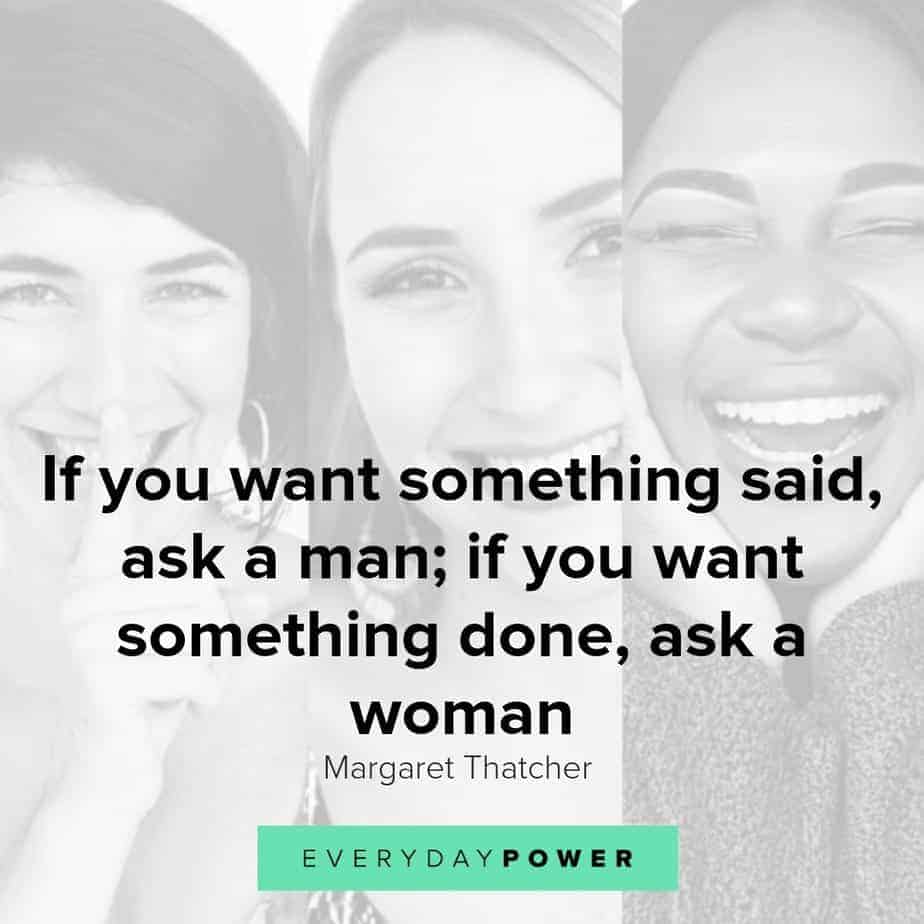 5. “I hate to hear you talk about all women as if they were fine ladies instead of rational creatures. None of us want to be in calm waters all our lives.” ― Jane Austen, Persuasion (More quotes from Jane Austen.)

7. “Feminism is hated because women are hated. Anti-feminism is a direct expression of misogyny; it is the political defense of women hating.” – Andrea Dworkin

8. “Feminism is about giving women choice. Feminism is not a stick with which to beat other women with.” – Emma Watson

9. “You may not control all the events that happen to you, but you can decide not to be reduced by them.” – Maya Angelou

11. “[Unlikeable women] accept the consequences of their choices, and those consequences become stories worth reading.” – Roxane Gay

12. “There is a special place in hell for women who don’t help other women.” – Madeleine Albright

Feminism Quotes about Self-determination and freedom

13. “My idea of feminism is self-determination, and it’s very open-ended: every woman has the right to become herself, and do whatever she needs to do.” – Ani DiFranco

14. “Women, we endure those cuts in so many ways that we don’t even notice we’re cut. We are living with small tiny cuts, and we are bleeding every single day. And we’re still getting up.” – Michelle Obama

15. “A huge part of being a feminist is giving other women the freedom to make choices you might not necessarily make yourself.” – Lena Dunham 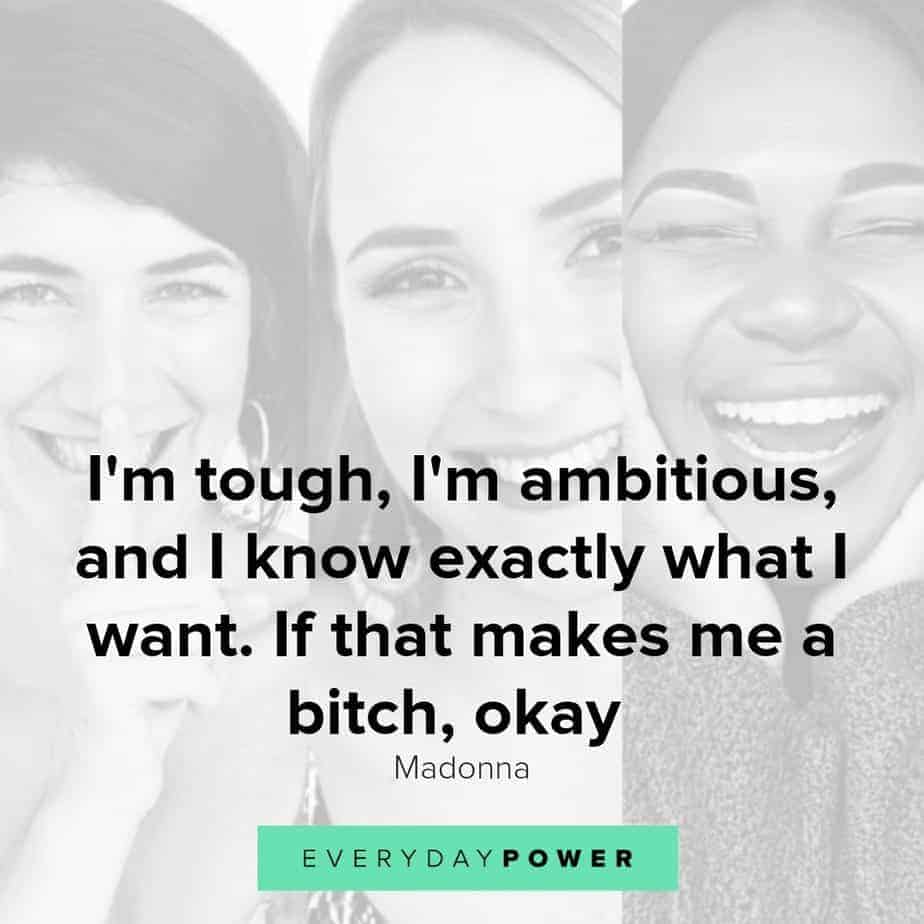 17. “I have chosen to no longer be apologetic for my femininity. And I want to be respected in all my femaleness. Because I deserve to be.” – Chimamanda Ngozi Adichie

18. “It took me quite a long time to develop a voice, and now that I have it, I am not going to be silent.” — Madeleine Albright

19. “Feminism is not just about women; it’s about letting all people lead fuller lives.” – Jane Fonda

20. “Feminism isn’t a cloak that I put on in the morning and take off at certain times. It’s who I am. I look at the world through eyes that are very alert to gender injustice, and I always will.” – Chimamanda Ngozi Adichie

21. “I myself have never been able to find out precisely what feminism is: I only know that people call me a feminist whenever I express sentiments that distinguish me from a doormat.” – Rebecca West

22. “There’s just as many different kinds of feminism as there are women in the world.” – Kathleen Hanna

23. “Feminism is not dead, by no means. It has evolved. If you don’t like the term, change it for Goddess’ sake. Call it Aphrodite, or Venus, or bimbo, or whatever you want; the name doesn’t matter, as long as we understand what it is about, and we support it.” – Isabel Allende

24. “More than ever, I am aware of the need to support and celebrate each other. I like to believe I am part of a global support group network of 3.4 billion. Imagine: if you can fall back on the 3.5 billion sisters, and the many good men who are with us, what could we possibly not achieve?” – Nicole Kidman

25. “They tried to bury us; they did not know we were the seeds.” – Mexican Proverb 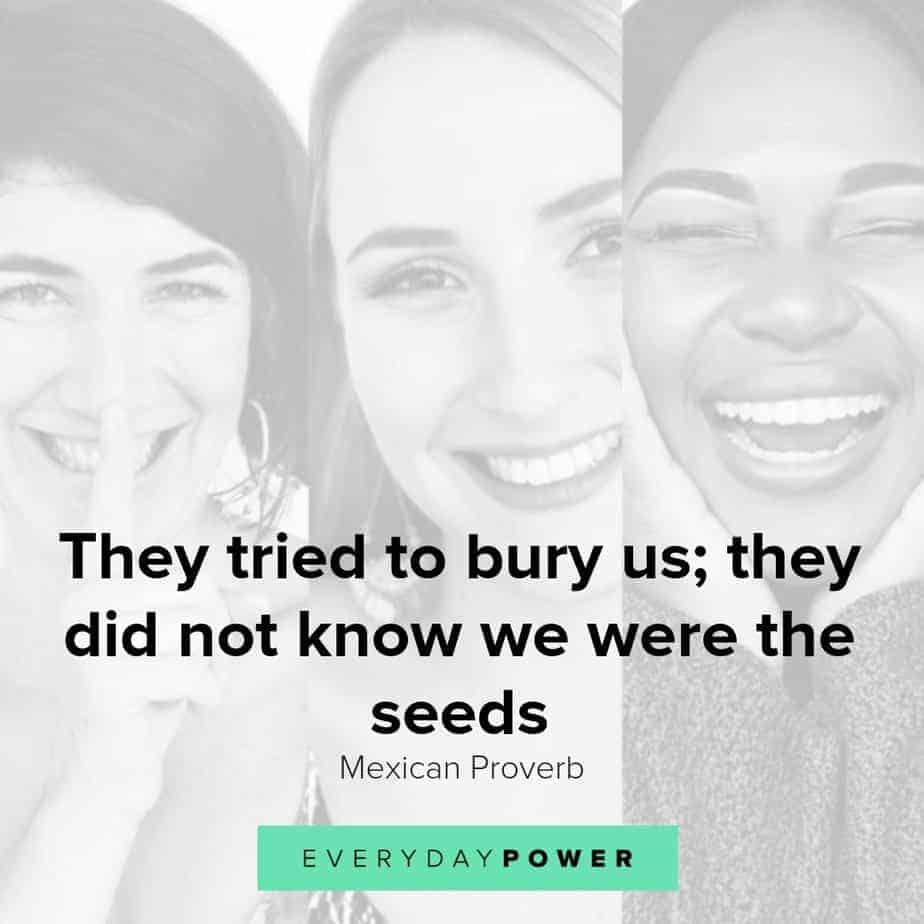 Also check out these bad bitch quotes that will inspire confidence within you.

Feminism Quotes to help you feel like a badass everyday

26. “There is no gate, no lock, no bolt that you can set upon the freedom of my mind.” – Virginia Woolf

27. “A woman without a man is like a fish without a bicycle.” ― Irina Dunn

28. “We cannot all succeed when half of us are held back.” – Malala Yousafzai

29. “Feminism isn’t about making women strong. Women are already strong. It’s about changing the way the world perceives that strength.” — G.D. Anderson
If you’re enjoying these quotes, make sure to read our collection of inspirational quotes for women on strength and leadership.

30. “Feminisim’s agenda is basic: it asks that women not be forced to choose between public justice and private happiness.” – Susan Faludi

31. “I want women’s rights to be equally honored, and uplifted, and heard…but I want to see us fighting the fight for all women — women of color, our LGBTQ sisters, our Muslim sisters. I want to see millions of us marching out there for our rights, and I want to see us out there marching for the rights of women like Dajerria Becton, who was body slammed by a cop while she was in her swimsuit for simply existing as a young, vocal, black girl. I think we are inching closer and closer there, and for that, I am very proud.” – Solange Knowles

32. “There’s a strong chance the next Bill Gates isn’t going to look anything like the last one. So I’m interested in finding solutions that will help ensure we recognize her when we see her.” – Melinda Gates

33. “I am no bird; and no net ensnares me: I am a free human being with an independent will.” – Charlotte Bronte

34. “I believe the rights of women and girls is the unfinished business of the 21st Century.” – Hillary Clinton 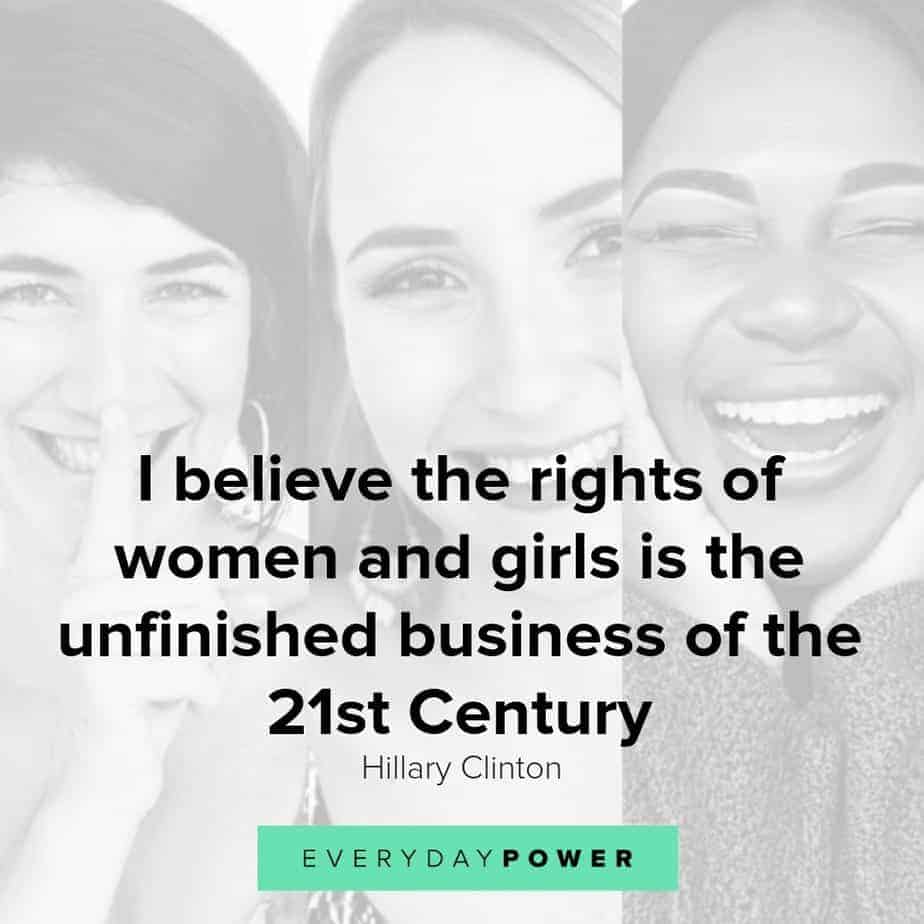 36. “Why do people say “grow some balls”? Balls are weak and sensitive. If you wanna be tough, grow a vagina. Those things can take a pounding.” ― Sheng Wang

Feminism Quotes to make you strong

37. “Feminism is the radical notion that women are human beings.” ― Cheris Kramarae

38. “I am not free while any woman is unfree, even when her shackles are very different from my own.” – Audre Lorde

42. “A woman with a voice is, by definition, a strong woman.” —Melinda Gates

43. “We need everyone to be a feminist. Feminism is the fight for the equality of sexes, not for the domination of one sex over another.” – Najat Vallaud-Belkacem

44. “No woman gets an orgasm from shining the kitchen floor.” – Betty Friedan 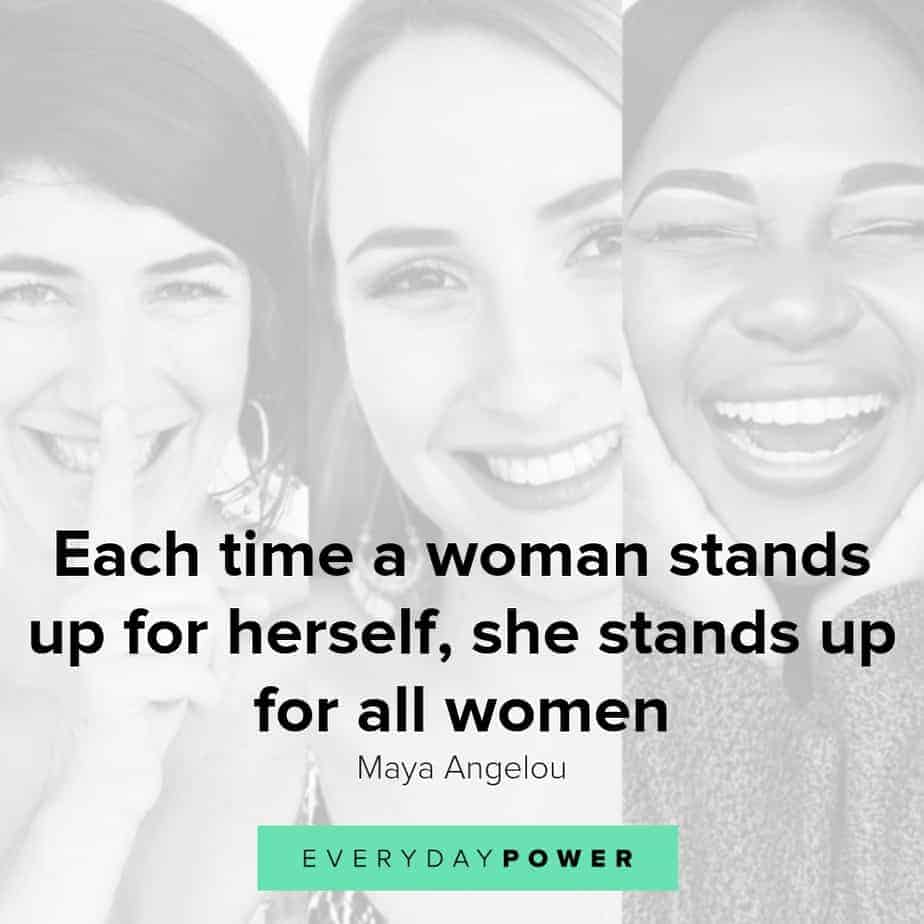 46. “Your silence will not protect you.” – Audre Lorde

47. “One isn’t born courageous, one becomes it.” – Marjane Satrapi

48. “I do not wish women to have power over men; but over themselves.” – Mary Shelley

49. “No country can ever truly flourish if it stifles the potential of its women and deprives itself of the contributions of half its citizens.” – Michelle Obama

50. “We teach girls to shrink themselves, to make themselves smaller. We say to girls, you can have ambition, but not too much. You should aim to be successful, but not too successful. Otherwise, you would threaten the man.

We raise girls to see each other as competitors not for jobs or accomplishments, which I think can be a good thing, but for the attention of men. We teach girls that they cannot be sexual beings in the way that boys are.” – Chimamanda Ngozi Adichie

Powerful feminism quotes to inspire you

51. “It will be great when it’s not such a big deal when a woman does a good job.” —Susan Sarandon

52. “Give a girl the right shoes and she can conquer the world.” —Marilyn Monroe

53. “Stop wearing your wishbone where your backbone ought to be.” —Elizabeth Gilbert

55. “Don’t let anyone tell you you’re weak because you’re a woman.” —Mary Kom

56. “Don’t give up, don’t take anything personally, and don’t take no for an answer.” – Sophia Amoruso

57. “Think like a queen. A queen is not afraid to fail. Failure is another steppingstone to greatness.” —Oprah Winfrey

58. “There is no limit to what we, as women, can accomplish.” – Michelle Obama

Also, check out these strong women quotes to share with your tribe.

61. “It’s not my responsibility to be beautiful. I’m not alive for that purpose. My existence is not about how desirable you find me.” – Warsan Shire

62. “The thing women have yet to learn is nobody gives you power. You just take it.” – Roseanne Barr

63. “A feminist is anyone who recognizes the equality and full humanity of women and men.” – Gloria Steinem

65. “Anything may happen when womanhood has ceased to be a protected occupation.” –  Virginia Woolf

66. “My mother told me to be a lady. And for her, that meant be your own person, be independent.” – Ruth Bader Ginsburg

67. “The word feminism has become synonymous with man-hating when in fact it has more to do with women than men.” – Aysha Taryam

68. “Women belong in all places where decisions are being made. It shouldn’t be that women are the exception.” – Ruth Bader Ginsburg

69. “Because when there is true equality, resentment does not exist.” – Chimamanda Ngozi Adichie

70. “Women are already born so far ahead ability-wise. The day men can give birth, that’s when we can start talking about equal rights.” – Chuck Palahniuk

Did You Enjoy These Feminism Quotes?

Feminism is a commendable crusade for women’s rights. Gender parity is something that women have struggled to achieve for years. Although there have been accomplishments along the way from outstanding and heroic women, the fight is certainly not over.

When things feel tough or if you’re needing an extra push of encouragement, nothing will make you feel prouder to be a woman than to read empowering feminism quotes from feminists who understand the struggle for the freedoms we have today.

Did you enjoy these feminism quotes? Which one was your favorite quote? Let us know in the comment section below. Also, take a minute to share with your fans and followers.