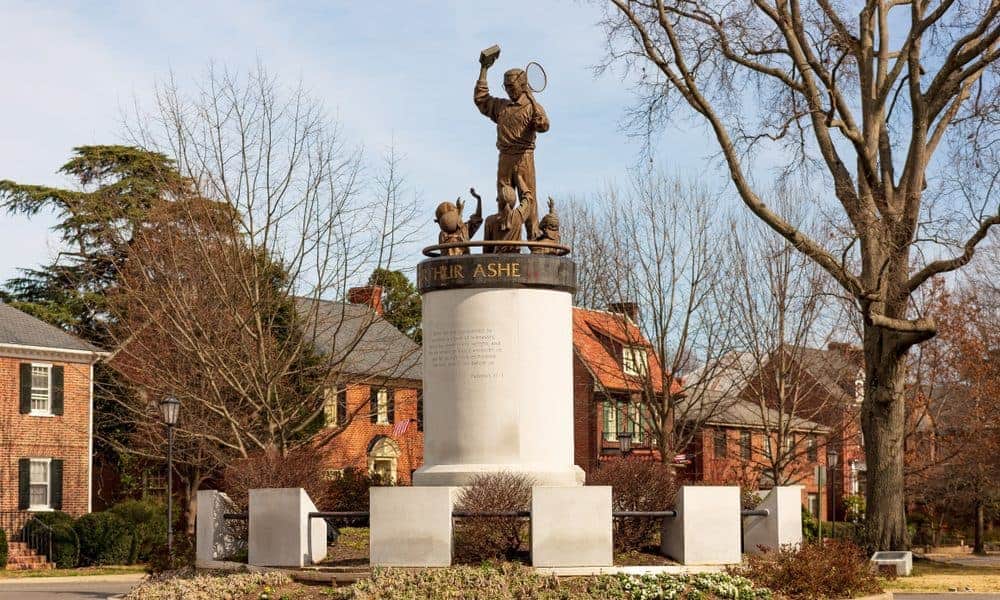 Our latest collection of inspirational Arthur Ashe quotes about life and success.

Born Arthur Robert Ashe Jr. on July 10, 1943 to Arthur Ashe Sr. and Mattie Cunningham in Richmond, Virginia, Arthur Ashe would go on to become the first black American to be ranked No. 1 in the world in the men’s singles at Wimbledon and the U.S. Open.

Arthur’s childhood was marked by hardship – at only six years old, his mother passed away, and his father became strict because he feared his sons would become wayward children without their mother.

A year after Arthur’s mother died, he discovered tennis. Under the direction of Dr. Robert Walter Johnson Jr., a tennis coach who was well known in the black tennis community from Lynchburg, Virginia, Ashe excelled in tennis.

He reached the junior national championships in his first tournament.

He won the junior national title in 1960 and 1961. He was ranked the fifth best junior player in the country, and he accepted a scholarship to the University of California, Los Angeles, where he earned a degree in business administration.

He became the first African American to be recruited by the U.S. Davis Cup team in 1963, and in 1968, he shocked the world by winning the U.S. Open title, making him the first (and to this day, the only) male African-American player to do so.

Two years later, he also obtained the Australian title. In 1975, he became the first African-American male to win Wimbledon. The same year, he became ranked number one in the world.

Ten years later, he would become the first black U.S. player to be inducted into the International Tennis Hall of Fame. In 1979, he retired after a heart attack. He contracted AIDS in 1988, and only told the public in 1992.

He died from AIDS-related pneumonia on February 6, 1993. Arthur Ashe is inspirational because he never let prejudice or personal tragedy stop him from working hard and climbing the tennis ranks until he hit number one.

3. “If you’re paid before you walk on the court, what’s the point in playing as if your life depended on it?” – Arthur Ashe

4. “I guess I started too early because I just thought it was something fun to do.” – Arthur Ashe

9. “My potential is more than can be expressed within the bounds of my race or ethnic identity.” – Arthur Ashe

10. “Success is a journey, not a destination. The doing is often more important than the outcome.” – Arthur Ashe

12. “Drummed into me, above all, by my dad, by the whole family, was that without your good name, you would be nothing.” – Arthur Ashe

13. “Clothes and manners do not make the man, but where he is made they greatly improve his appearance.” – Arthur Ashe

14. “I wish more of us could understand that our increasing isolation, no matter how much it seems to express pride and self-affirmation, is not the answer to our problems.” – Arthur Ashe

15. “We must reach out our hand in friendship both to those who would befriend us and those who would be our enemy. We must believe in the power of education.” – Arthur Ashe
If you’re enjoying these quotes, make sure to read our selection of friendship quotes celebrating life-long relationships.

16. “I may not be walking with you all the way, or even much of the way, as I walk with you now. Don’t be angry with me if I am not there in person, alive and well, when you need me. I would like nothing more than to be with you always.” – Arthur Ashe

17. “Regardless of how you feel inside, always try to look like a winner. Even if you are behind, a sustained look of control and confidence can give you a mental edge that results in victory.” – Arthur Ashe

18. “You’ve got to get to the stage in life where going for it is more important than winning or losing.” – Arthur Ashe

19. “The ideal attitude is to be physically loose and mentally tight.” – Arthur Ashe

20. “You learn about equality in history and civics, but you find out life is not really like that.” – Arthur Ashe

21. “There is a syndrome in sports called ”paralysis by analysis.” – Arthur Ashe

22. “A wise person decides slowly but abides by these decisions.” – Arthur Ashe

23. “I accepted the fact that as much as I want to lead others, and love to be around other people, in some essential way, I am something of a loner.” – Arthur Ashe

24. “I don’t care who you are, you’re going to choke in certain matches. You get to a point where your legs don’t move and you can’t take a deep breath. You start to hit the ball about a yard wide, instead of inches.” – Arthur Ashe

25. “I don’t want to be remembered for my tennis accomplishments.” – Arthur Ashe

26. “I have tried to keep on with my striving because this is the only hope I have of ever achieving anything worthwhile and lasting.” – Arthur Ashe

27. “You are never really playing an opponent. You are playing yourself, your own highest standards, and when you reach your limits, that is real joy.” – Arthur Ashe

28. “Most people resist change, even when it premises to be for the better. But change will come and if you acknowledge this simple but undisputable fact of life and understand that you must adjust to all change, then you will have a head start.” – Arthur Ashe

29. “I have always drawn strength from being close to home.” – Arthur Ashe

32. “Every time you win, it diminishes the fear a little bit. You never really cancel the fear of losing; you keep challenging it.” – Arthur Ashe

33. “We blacks look for leadership in men and women of such youth and inexperience, as well as poverty of education and character, that it is no wonder that we sometimes seem rudderless. . . . We see basketball players and pop singers as possible role models.” – Arthur Ashe

34. “Someone once told me that God figured that I was a pretty good juggler. I could keep a lot of balls in the air at one time. So He said, “Let’s see if he can juggle another one.” – Arthur Ashe

35. “Seven out of 10 black faces you see on television are athletes. The black athlete carries the image of the black community. He carries the cross, in a way, until blacks make inroads in other dimensions.” – Arthur Ashe

36. “I strongly believe the black culture spends too much time, energy and effort raising, praising, and teasing our black children about the dubious glories of professional sports.” – Arthur Ashe

37. “Trust has to be earned, and should come only after the passage of time.” – Arthur Ashe

38. “When we were together, I loved you deeply and you gave me so much happiness I can never repay you.” – Arthur Ashe

39. “In general, very few people are prepared for any kind of disaster including disability which doesn’t require a hurricane.” – Arthur Ashe

40. “There is a terrific apprehension among some people that blacks will take over the sport… It will create problems because their behavior, speech and dress is just a completely different culture.” – Arthur Ashe

41. “I take the good with the bad, and I try to face them both with as much calm and dignity as I can muster.” – Arthur Ashe

42. “I’m learning to use others’ weaknesses. I don’t hammer a man’s soft spot constantly, because he may strengthen it. I just save it as a trump up my sleeve for moments when I really need a point.” – Arthur Ashe

43. “A couple of times a day I sit quietly and visualize my body fighting the AIDS virus. It’s the same as me sitting and seeing myself hit the perfect serve. I did that often when I was an athlete.” – Arthur Ashe

44. “Always have the situation under control, even if losing. Never betray an inward sense of defeat.” – Arthur Ashe

45. “I have always tried to be true to myself, to pick those battles I felt were important. My ultimate responsibility is to myself. I could never be anything else.” – Arthur Ashe

46. “Fear isn’t an excuse to come to a standstill. It’s the impetus to step up and strike.” – Arthur Ashe

49. “I have become convinced that we blacks spend too much time on the playing field and too little time in libraries.” – Arthur Ashe

51. “It’s an abnormal world I live in. I don’t belong anywhere. It’s like I’m floating down the middle. I’m never quite sure where I am.” – Arthur Ashe

52. “In America you’re conditioned to regard everything as a contest. You have to make the Ten Best Dressed List, win this, win that. It drives me nuts sometimes. Who cares, for Christ’s sake?” – Arthur Ashe

54. “It is not just the more talented player who wins. Some players may try a little harder.” – Arthur Ashe

55. “Throughout my formal education I spent many, many hours in public and school libraries. Libraries became courts of last resort, as it were. The current definitive answer to almost any question can be found within the four walls of most libraries.” – Arthur Ashe

57. “Sometimes, a defeat can be more beautiful and satisfying than certain victories. The English have a point in insisting that it matters not who won or lost, but how you played the game.” – Arthur Ashe

58. “Let me put it this way: I think Republicans tend to keep the ball in play, Democrats go for broke.” – Arthur Ashe

60. “Wherever I am when you feel sick at heart and weary of life, or when you stumble and fall and don’t know if you can get up again, think of me. I will be watching and smiling and cheering on.” – Arthur Ashe

Don’t forget to also read these soccer quotes that will inspire you to reach your highest level.

61. “Life is like a tennis game. You can’t win without serving.” – Arthur Ashe

Which of these Arthur Ashe quotes is your favorite?

Do you have any other inspirational quotes to add? Let us know in the comment section below.