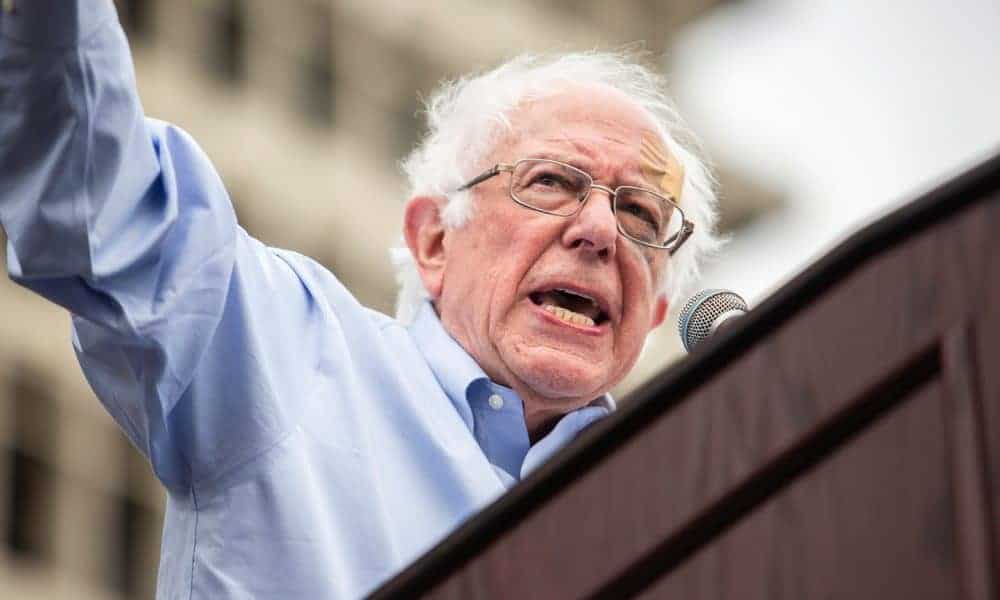 Bernie Sanders is a politician who is different. He’s approachable, kind, compassionate, and many other amazing things. He’s made a lasting impression on millions, and these powerful Bernie Sanders quotes will leave their imprint on you, too!

Bernie Sanders was born on September 8, 1941 in New York to two struggling working-class Jewish immigrants from Poland. Growing up in a family that suffered from America’s economic disparity sparked Bernie’s activism in both politics and civil rights early on in his life.

At the University of Chicago, Bernie became actively involved in the Civil Rights Movement, and he became a member of the Congress of Racial Equality, or CORE, where, in 1962 he participated in a sit-in against segregation of off-campus housing. He also worked as an organizer for the Student Nonviolent Coordinating Committee, and he even participated in the March on Washington in 1963.

Bernie’s political activism came to a head when, in 1981, he was elected mayor of Burlington, Vermont, and even got reelected three more times. In 1990, he earned a seat in the U.S. House of Representatives. In 2006, Sanders switched from the House of Representatives to the Senate after winning against Republican businessman Richard Tarrant.

The issues Bernie is particularly vocal about include issues of equality, from gender and racial equality to wage and healthcare equality. Bernie Sanders is an extremely inspirational person because, no matter where he has been in life, he has stayed true to himself and his beliefs. He has done something not many politicians can say – he’s never changed his ideals, or pretended to change his ideals, to get votes.

Also check out these thought-provoking political quotes that show all perspectives.

1. “I believe when we stand together when we share the vision that government should work for all of us, there is nothing we can’t accomplish.” – Bernie Sanders

2. “Citizens in a democracy need diverse sources of news and information.” – Bernie Sanders

3. “Even the alternative weekly newspapers, traditionally a bastion of progressive thought and analysis, have been bought by a monopoly franchise and made a predictable shift to the right in their coverage of local news.” – Bernie Sanders

4. “I’m not much into speculation.” – Bernie Sanders

5. “People in American jails are disproportionately people of color. That’s the reality in America today. That’s a reality that has to change.” – Bernie Sanders

6. “You can have a different point of view on immigration or anything else, but we cannot be attacking people because of their religion.” – Bernie Sanders

7. “We must not accept a nation in which billionaires compete as to the size of their super-yachts, while children in America go hungry.” – Bernie Sanders

8. “This looks to me like a group of people who are prepared to make a political revolution.” – Bernie Sanders

9. “It’s unacceptable that millions of college graduates can’t afford to buy their first home or car because of outrageously high student debt.” – Bernie Sanders
If you’re enjoying these quotes, make sure to read our collection of college quotes that will motivate you to study, learn, and succeed.

11. “It makes no sense to me that the United States of America has more jails and prisons than colleges and universities.” – Bernie Sanders

12. “No president alone can effectively address the crises facing the working families of this country without a powerful grassroots movement.” – Bernie Sanders

13. “We have an obligation to take care of the people who fight for us.” – Bernie Sanders

14. “America becomes a greater nation when we stand together and say no to racism, hatred, and bigotry.” – Bernie Sanders

Don’t forget to also read these Nancy Pelosi quotes and sayings from America’s most powerful woman.

16. “Our job is not to divide. Our job is to bring people together.” – Bernie Sanders

17. “Our most important task is to revitalize American democracy. When we do that we change America.” – Bernie Sanders

18. “When it comes to supporting real family values, the United States lags behind virtually every major country on earth.” – Bernie Sanders

19. “I’m not running for president because it’s my turn, but because it’s everyone’s turn to live in a nation of hope and opportunity for all.” – Bernie Sanders

20. “The U.S. needs to lead the international community in fighting climate change to maintain our economic strength and global security.” – Bernie Sanders

21. “When millions of people become engaged in the political process they win.” – Bernie Sanders

22. “It’s unacceptable that billionaires and corporations can contribute as much as they want to elect those who represent special interests.” – Bernie Sanders

Also check out these thoughtful Andrew Yang quotes from the former 2020 Democratic candidate.

24. “You aren’t going to accomplish what we need for working families as long as big money interests control the US Congress.” – Bernie Sanders

25. “If you can’t afford to take care of our veterans, then don’t send them to war.” – Bernie Sanders

27. “I’ve been criticized for saying this so let me say it again: I believe health care should be a right, not a privilege.” – Bernie Sanders

29. “We must end the disgrace of having more people in jail than any other country. Disproportionately African-American and Latino.” – Bernie Sanders

31. “When people stand together, and are prepared to fight back, there’s nothing we can’t accomplish.” – Bernie Sanders

34. “For many, the American dream has become a nightmare.” – Bernie Sanders

36. “The United States must join the rest of the industrialized world, guarantee health care to all people as a right.” – Bernie Sanders

37. “Americans’ right to free speech should not be proportionate to their bank accounts.”– Bernie Sanders

38. “Real change never occurs from the top on down, [but] always from the bottom on up.” – Bernie Sanders

39. “To me, democratic socialism means democracy. It means creating a government that represents all of us, not just the wealthiest people in the country.” – Bernie Sanders

40. “Before Social Security existed, about half of America’s senior citizens lived in poverty.” – Bernie Sanders

42. “We need to change the power structure in America, we need to end the political oligarchy.” – Bernie Sanders

43. “What kind of nation are we when we give tax breaks to billionaires, but we can’t take care of the elderly and the children.”– Bernie Sanders

45. “A nation will not survive morally or economically when so few have so much and so many have so little.”– Bernie Sanders

46. “Together, together, my friends, we have begun a political revolution to transform America, and that revolution, our revolution, continues!” – Bernie Sanders

47. “When a mother goes to the store and purchases food for her child, she has the right to know what she is feeding her family.” – Bernie Sanders

48. “History will record that the Citizens United decision is one of the worst in the history of our country.” – Bernie Sanders

49. “The Federal Reserve has the responsibility to protect the credit rights of consumers.” – Bernie Sanders

50. “If we are going to reverse the race to the bottom, workers must have the right to engage in collective bargaining.” – Bernie Sanders

51. “The greed of the billionaire class has got to end and we are going to end it for them.” – Bernie Sanders

53. “I don’t represent large corporations and I don’t want their money.” –Bernie Sanders

54. “I happen to believe that we should move to a Medicare-for-all single-payer system, similar to what other countries around the world have.” –Bernie Sanders

55. “A job should lift workers out of poverty, not keep them in it.” – Bernie Sanders

57. “I think the issue of income and wealth inequality is in fact a moral issue.” – Bernie Sanders

58. “Are we prepared to take on the enormous political power of the billionaire class or do we continue to slide into economic and political oligarchy?” – Bernie Sanders

59. “I think the immediate thing is we stand up to protect those people who are in trouble.” – Bernie Sanders

60. “I have spent the better part of my adult life standing up and fighting for working families.” – Bernie Sanders

61. “It is a challenge that progressives face throughout the country. We lose when we are divided. We win when we are united.” – Bernie Sanders

63. “We are living in a nation that worships wealth rather than caring for the poor. I don’t think that is the nation we should be living in.” – Bernie Sanders

64. “Change comes, even in the face of overwhelming odds. And the recognition of the changes we have already made, of what we have won, inspires us to fight even harder.” – Bernie Sanders

65. “We are living in a time where a handful of people have wealth beyond comprehension.” – Bernie Sanders

66. “Change will not take place without political participation.” – Bernie Sanders

67. “In the richest country in the history of the world, every student who has the desire and the ability should be able to go to college.” – Bernie Sanders

Which Bernie Sanders quote is your favorite?

Throughout the years, Bernie Sanders has pulled off incredible success stories in politics. The longest serving independent member of Congress in U.S. history, he represents a true challenge to the political system.

Sanders is an extremely inspirational person who has done something not many politicians can say. For so many Americans, he represents hope for the future. We hope his words have inspired you to stay true to yourself and your beliefs.

Did you enjoy these Bernie Sanders quotes? Which of the quotes was your favorite? Tell us in the comment section below. Also, don’t forget to share with your friends and followers.