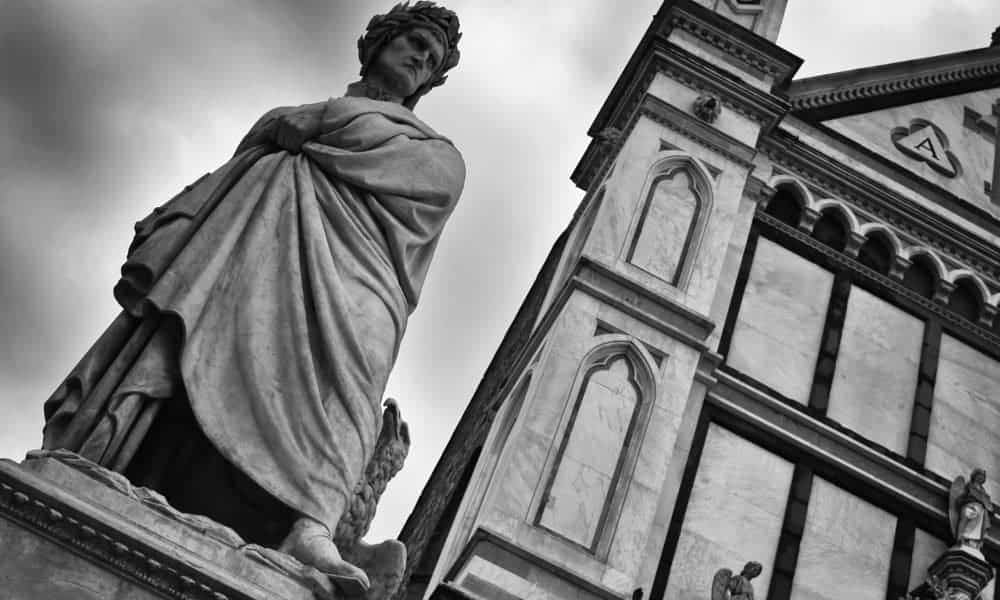 These Dante’s Inferno quotes will help you learn more about its central ideas.

“Dante’s Inferno” is a seminal work that continues to figure large in the canon of classical literature. Many people first read this piece in a high school English class. Later in life, the dust that settles on the memory of its reading may make it hard to recall the messages you learned from Dante’s Inferno.

What is “Dante’s Inferno” about, anyway?

“Inferno” is the first installment in a three-part epic poem called “The Divine Comedy,” written by the 14th-century Italian poet Dante Alighieri. “Inferno” is followed by “Purgatory”, and then by “Heaven.”

The story follows the protagonist as he gets lost and winds up traveling through Hell, meeting many of its inhabitants and learning about their sins as he goes.

Some of the most important themes in “Dante’s Inferno” are sin and its consequences, choices, fate, and justice. Browse these Dante’s Inferno quotes to learn more about its central ideas.

Also check out these Brave New World quotes from the controversial dystopian novel.

1. “Do not be afraid; our fate cannot be taken from us; it is a gift.” – Dante Alighieri, Inferno

2. “In the middle of the journey of our life I found myself within a dark woods where the straight way was lost.” – Dante Alighieri, Inferno

3. “Love, which quickly arrests the gentle heart, seized him with my beautiful form; that was taken from me, in a manner which still grieves me. Love, which pardons no beloved from loving, took me so strongly with delight in him; that, as you see, it still abandons me not…” – Dante Alighieri, Inferno

4. “There is no greater sorrow than to recall our times of joy in wretchedness.” – Dante Alighieri, Inferno

5. “They yearn for what they fear for.” – Dante Alighieri, Inferno

7. “From there we came outside and saw the stars.” – Dante Alighieri, Inferno

8. “Because your question searches for deep meaning, I shall explain in simple words.” – Dante Alighieri, Inferno

9. “But the stars that marked our starting fall away. We must go deeper into greater pain, for it is not permitted that we stay.” – Dante Alighieri, Inferno

10. “As little flowers, which the chill of night has bent and huddled, when the white sun strikes, grow straight and open fully on their stems, so did I, too, with my exhausted force.” – Dante Alighieri, Inferno

11. “Hope not ever to see Heaven. I have come to lead you to the other shore; into eternal darkness; into fire and into ice.” – Dante Alighieri, Inferno

12. “It was the hour of morning, when the sun mounts with those stars that shone with it when God’s own love first set in motion those fair things.” – Dante Alighieri, Inferno

13. “At grief so deep the tongue must wag in vain; the language of our sense and memory lacks the vocabulary of such pain.” – Dante Alighieri, Inferno

14. “One ought to be afraid of nothing other than things possessed of power to do us harm, but things innocuous need not be feared.” – Dante Alighieri, Inferno

15. “Soon you will be where your own eyes will see the source and cause and give you their own answer to the mystery.” – Dante Alighieri, Inferno

16. “If you are going through hell, keep going.” – Winston S. Churchill

17. “What is hell? I maintain that it is the suffering of being unable to love.” – Fyodor Dostoevsky

18. “The path to paradise begins in hell.” – Dante Alighieri

20. “Maybe this world is another planet’s hell.” – Aldous Huxley

22. “The hottest places in hell are reserved for those who, in times of great moral crisis, maintain their neutrality.” – Dante Alighieri

23. “Indeed the safest road to Hell is the gradual one–the gentle slope, soft underfoot, without sudden turnings, without milestones, without signposts.” – C.S. Lewis

25. “I hold it to be the inalienable right of anybody to go to hell in his own way.” – Robert Frost

28. “An intelligent hell would be better than a stupid paradise.” – Victor Hugo

29. “Hell is just a frame of mind.” – Christopher Marlowe

30. “I was walking among the fires of Hell, delighted with the enjoyments of Genius; which to Angels look like torment and insanity.” – William Blake

31. “When you’re in hell, only a devil can point the way out.” – Joe Abercrombie

32. “We are free to choose our paths, but we can’t choose the consequences that come with them.” – Sean Covey

33. “When you choose an action, you choose the consequences of that action. When you desire a consequence you had damned well better take the action that would create it.” – Lois McMaster Bujold

34. “There are in nature neither rewards nor punishments — there are consequences.” – Robert G. Ingersoll

36. “What’s the use you learning to do right when it’s troublesome to do right and ain’t no trouble to do wrong, and the wages is just the same?” – Mark Twain

37. “I’ve made a decision and now I must face the consequences.” – J. Michael Straczynski

38. “How people treat you is their karma; how you react is yours.” – Wayne Dyer

39. “Like gravity, karma is so basic we often don’t even notice it.” – Sakyong Mipham

40. “There’s a natural law of karma that vindictive people, who go out of their way to hurt others, will end up broke and alone.” – Sylvester Stallone

41. “I’m a true believer in karma. You get what you give, whether it’s bad or good.” – Sandra Bullock

42. “Karma comes after everyone eventually. You can’t get away with screwing people over your whole life, I don’t care who you are. What goes around comes around. That’s how it works. Sooner or later the universe will serve you the revenge that you deserve.” – Jessica Brody
If you’re enjoying these quotes, make sure to read our collection of karma quotes about what goes around & comes around in our life.

43. “Realize that everything connects to everything else.” – Leonardo Da Vinci

44. If you’re really a mean person you’re going to come back as a fly and eat poop.” – Kurt Cobain

45. “You cannot do harm to someone because someone has done harm to you. You will pay just like they will.”- Ericka Williams

46. “For the sake of peace and justice, let us move toward a world in which all people are at last free to determine their own destiny.” – Ronald Reagan

47. “When it comes to life, we spin our own yarn, and where we end up is really, in fact, where we always intended to be.” – Julia Glass

48. “Destiny is a worrying concept. I don’t want to be fated, I want to choose.” – Jeanette Winterson

49. “Every person has the power to change their fate if they are brave enough to fight for what they desire more than anything.” – Stephanie Garber

If you’re enjoying these quotes, make sure to read our collection of fate quotes that will remind you to take each day one at a time.

50. “Every man gotta right to decide his own destiny.” – Bob Marley

51. “It is not in the stars to hold our destiny but in ourselves.” – William Shakespeare

52. “Actions are the seed of fate. Deeds grow into destiny.” – Harry S. Truman

53. “There is no fate that cannot be surmounted by scorn.” – Albert Camus

54. “Choices made, whether bad or good, follow you forever and affect everyone in their path one way or another.” – J.E.B. Spredemann

55. “Once you make a decision, the universe conspires to make it happen.” – Ralph Waldo Emerson

56. “Control your own destiny or someone else will.” – Jack Welch

57. “It is in your moments of decision that your destiny is shaped.” – Tony Robbins

58. “We dream to give ourselves hope. To stop dreaming – well, that’s like saying you can never change your fate.” – Amy Tan

59. “No one saves us but ourselves. No one can and no one may. We ourselves must walk the path.” – Buddha

63. “My thoughts were full of other things When I wandered off the path.” – Dante Alighieri

64. “These dwell among the blackest souls, loaded down deep by sins of differing types. If you sink far enough, you’ll see them all.” – Dante Alighieri

65. “And now, I pray you, tell me who you are: do not be harder than I’ve been with you that in the world your name may still endure.” – Dante Alighieri

66. “So many times a man’s thoughts will waver, That it turns him back from honored paths, As false sight turns a beast, when he is afraid.” – Dante Alighieri

68. “Our powers, whether of mind or tongue, cannot embrace that measure of understanding.” – Dante Alighieri

69. “Before me, nothing was created but eternal things and I endure eternally. Abandon every hope, ye that enter.” – Dante Alighieri

70. “These have no hope that death will overcome. And so degraded is the life they lead all look with envy on all other fates.” – Dante Alighieri

What can we learn from “Dante’s Inferno?”

As the protagonist of “Dante’s Inferno” navigates the tiers of Hell, he meets many sinners who are serving out their eternal sentence. While each anecdote from the piece teaches its own lesson, the central messages are that you should not act against others in anger, you should be mindful of how your actions can accidentally hurt others, and especially that you should never intentionally do harm to other people.

The levels of Hell, going lower and in fact into colder climes as sins become more egregious, are delineated based on your treatment of others during your natural lifetime. “Dante’s Inferno” has colored popular depictions of Hell and damnation throughout literature in the seven centuries since its publication. It’s important for us all to take note of its key lessons about justice and fate.

What’s your biggest takeaway from these Dante’s Inferno quotes and lines? Do you have any other favorite quotes to add? Let us know in the comment section below.