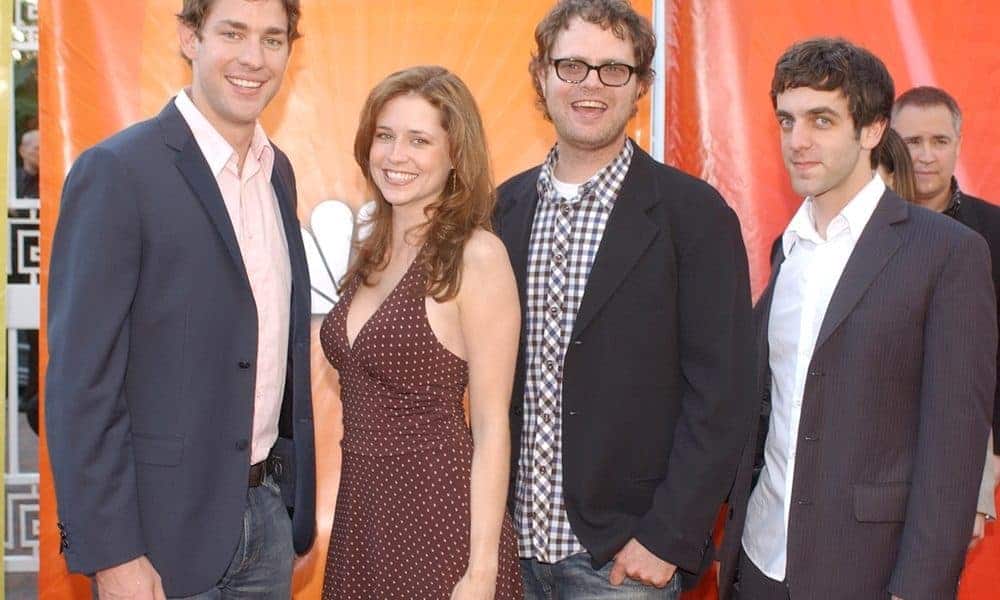 These hilarious quotes from the iconic television show The Office will crack up your friends!

The hit TV show The Office is a fan favorite known for its memorable characters, wild antics, and hilarious quotes. Whether you’re enjoying the series for the first time or binge-watching your favorite episodes again, these lines are guaranteed to make you laugh.

Who’s your favorite character from The Office?

Since The Office will be leaving Netflix at the start of 2020, the perfect time to tune in is right now. This show will make you laugh, cry, and fall in love with the entire cast.

The Office is loaded with comedy gold, funny quotes, and relatable moments. There’s something for everyone to enjoy, whether you’re a fan of Jim, Dwight, or Kelly. Turn on the TV and take a trip to Dunder Mifflin Paper Company to watch the goofy and heartwarming tales unfold. Relive the funniest moments of the show and share some laughs.

Funny The Office Quotes Worthy of The Dundie Awards

1. “If I had a gun with two bullets and I was in a room with Hitler, Bin Laden, and Toby, I would shoot Toby twice.” – Michael Scott (see more Michael Scott quotes)

2. “When someone smiles at me, all I see is a chimpanzee begging for its life.” – Dwight Schrute (Rainn Wilson)

3. “Life is short. Drive fast and leave a sexy corpse. That’s one of my mottos.” – Stanley Hudson (Leslie David Baker)

4. “I have a lot of questions. Number one, how dare you?” – Kelly Kapoor (Mindy Kaling)

5. “Guess what, I have flaws. What are they? Oh I don’t know. I sing in the shower. Sometimes I spend too much time volunteering. Occasionally I’ll hit somebody with my car. So sue me.” – Michael Scott (Steve Carell)

8. “The Taliban is the worst. Great heroin though.” – Creed Bratton

9. “Would I rather be feared or loved? Easy. Both. I want people to be afraid of how much they love me.” – Michael Scott (Steve Carell)

10. “This is ‘parkour’, the internet sensation of 2004. It was in one of the Bond films. It’s pretty impressive. The point is to get from point A to point B as creatively as possible, so technically they are doing parkour as long as point A is delusion and point B is the hospital.” – Jim Halpert (John Krasinski)

The Office quotes that will make your day

12. “I’m not superstitious but I am a little stitious.” – Michael Scott (Steve Carell)

13. “I have been trying to get on jury duty every year since I was 18 years old. To get and go sit in an air-conditioned room, downtown, judging people, while my lunch was paid for. That is the life.” – Stanley Hudson (Leslie David Baker)

14. “Who says exactly what they’re thinking? What kind of a game is that?” – Kelly Kapoor (Mindy Kaling)

17. “Mistletoe is not an excuse for sexual assault.” – Andy Bernard (Ed Helms)

19. “It’s better to be hurt by someone you know accidentally, than by a stranger on purpose.” – Dwight Schrute (Rainn Wilson)

21. “Yes, I have a dream, and it’s not some MLK dream for equality. I want to own a decommissioned lighthouse. And I want to live at the top. And nobody knows I live there. And there’s a button that I can press, and launch that lighthouse into space.” – Stanley Hudson (Leslie David Baker)

Also check out these funny Stranger Things quotes from the television series.

Funny The Office quotes from your favorite characters

22. “Ultimatums are key. Basically nobody does anything for me anymore unless I threaten to kill myself.” – Kelly Kapoor (Mindy Kaling)

24. “I don’t come up with this stuff, I just forward it along. You wouldn’t arrest the guy who was just passing drugs from one guy to another.” – Michael Scott (Steve Carell)

25. “Why are all these people here? There’s too many people on this earth. We need a new plague.” – Dwight Schrute (Rainn Wilson)

26. “Tough day. Yes. But I feel good. I put the office in their place, took a bunch of painkillers, drank a bottle of wine, took my pants off. I just feel good.” – Andy Bernard (Ed Helms)

27. “I knew exactly what to do. But in a much more real sense, I had no idea what to do.” – Michael Scott (Steve Carell)

28. “Maybe we weren’t right together, but it’s weird. I’d rather she be alone than with somebody. Is that love?” – Ryan Howard (B.J. Novak)

30. “I’m not offended by homosexuality. In the sixties I made love to many, many women, often outdoors in the mud and the rain, and it’s possible that a man slipped in. There’d be no way of knowing.” – Creed Bratton
If you’re enjoying these quotes, make sure to read our collection of This Is Us quotes from the award-winning series.

Hilarious The Office quotes to make you laugh

31. “Abraham Lincoln once said that, ‘If you’re a racist, I will attack you with the North.’ And those are the principles that I carry with me in the workplace.” – Michael Scott (Steve Carell)

32. “Nothing stresses me out. Except having to seek the approval of my inferiors.” – Dwight Schrute (Rainn Wilson)

35. “I am about to do something very bold in this job that I’ve never done before … try.” – Jim Halpert (John Krasinski)

36. “I don’t want any special treatment, Pam. I just want you to treat me like you would some family member who’s undergone some sort of serious physical trauma. I don’t think that’s too much to ask.” – Michael Scott (Steve Carell)
If you’re enjoying these quotes, make sure to read our collection of hilarious Minion quotes from the movie.

37. “Most people don’t even know that a candy cane represents a shepherd’s crook. Which I assure you does not taste like peppermint. It tastes like sheep feces.” – Dwight Schrute (Rainn Wilson)

38. “I would not miss it for the world. But if something else came up, I would definitely not go.” – Michael Scott (Steve Carell)

39. “’R’ is among the most menacing of sounds. That’s why they call it ‘murder’ and not ‘mukduk’” – Dwight Schrute (Rainn Wilson)

Funny and memorable The Office quotes

42. “When I was five, I imagined that there was such a thing as a unicorn. And this was before I had even heard of one, or seen one. I just drew a picture of a horse, that could fly over rainbows, and a had a huge spike in its head. I was five! Five-years-old. Couldn’t even talk yet.” – Michael Scott (Steve Carell)

If you’re enjoying these quotes, make sure to read our collection of unicorn quotes celebrating the mythological creature.

46. “Fortunately, my feelings regenerate at twice the speed of a normal man’s.” – Dwight Schrute (Rainn Wilson)

47. “I have six roommates, which are better than friends because they have to give you one month’s notice before they leave.” – Toby Flenderson (Paul Lieberstein)

49. “Powerpoints are the peacocks of the business world: all show, no meat.” – Dwight Schrute (Rainn Wilson)

48. “Sometimes I get so bored I just want to scream, and then sometimes I actually do scream. I just sort of feel out what the situation calls for.” – Kelly Kapoor (Mindy Kaling)

50. “Sometimes I’ll start a sentence and I don’t even know where it’s going. I just hope I find it along the way.” – Michael Scott (Steve Carell)

The Office quotes that will brighten your day

51. “I wish there was a way to know you’re in the good old days, before you’ve actually left them.” – Andy Bernard

52. “I am running away from my responsibilities. And it feels good.” – Michael Scott

53. “I live by one rule: No office romances, no way. Very messy, inappropriate…no. But, I live by another rule: Just do it…Nike.” – Michael Scott

54. “I used to be obese. Once you’ve conquered obesity, everything else is easy. Life literally moves in slow motion. I’m not saying I’m Superman, but let me just put it this way. If I were shot in the head, I’m pretty sure everything would be fine. I’d almost welcome it.” – Deangelo Vickers

55. “The worst thing about prison was the dementors.” – Michael “Prison Mike” Scott

Other memorable The Office quotes

61. “I have so much paperwork. I’m afraid my paperwork has paperwork.” – Gabrielle Zevin

62. “You think you can see the light at the end of the tunnel, but it’s only some bugger with a torch bringing you more work.” – David Brent

64. “It doesn’t matter what your boss thinks as long as he doesn’t cry.” – Gerry Geek

65. “If you don’t feel drowsy after lunch and don’t yawn in the office, you’re not a perfect employee!” – Himmilicious

66. “I had heard of offices feeling like prisons, but in this case our prison felt, rather anticlimactically, like an office.” – William Ritter

67. “The first place smelled like work, so I took the second.” – Charles Bukowski

68. “You can tell if a person is organized by checking his desktop.” – Ali AlJa’bari

70. “People sitting all day for hours looking at a glowing light are bound to get ran over like a deer in headlights.” – Richie Norton

Which funny quote from The Office is your favorite?

If you’re a fan of the hilarious TV show The Office, these lines are guaranteed to make you laugh. The series is full of great one-liners, silly sayings, and monologues of pure comedic genius. Keep these funny quotes in mind the next time you’re looking for a good show to binge watch over the weekend.

These quotes from The Office prove that the series is one of the best shows to ever grace television. Each episode is packed full of moments to make us laugh and cry. With an incredible cast, hilarious writing, and memorable quotes, it’s no surprise that the show is so popular. Share these quotes with a fan of The Office to make them smile!

What are your favorite quotes from The Office that make you laugh every time? Let us know in the comment section below.