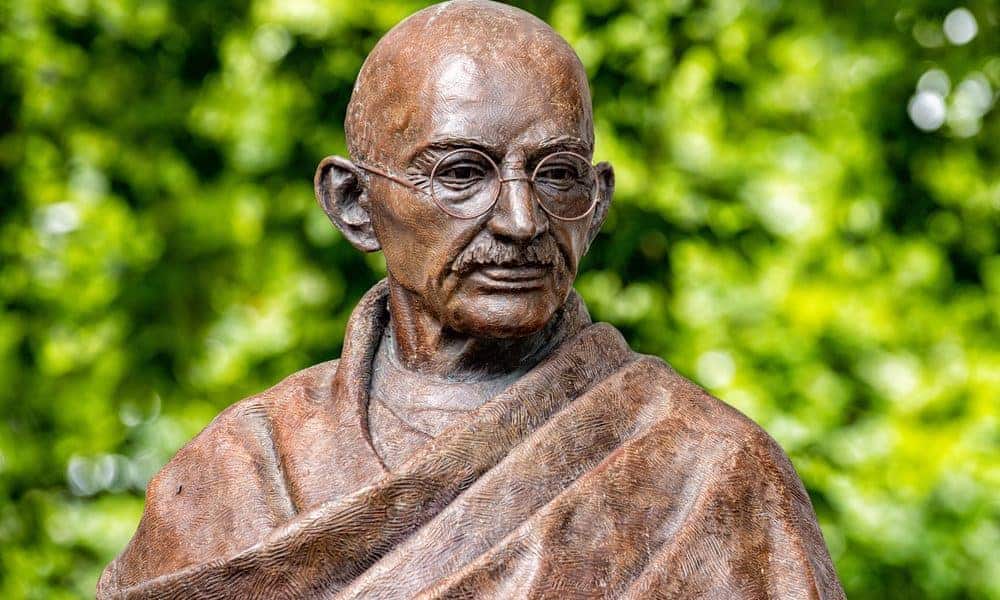 A man defined by peace, understanding, and challenging others to do the same, Mahatma Gandhi was a man that many loved and respected greatly. If you’re in search of wise words that will open your mind, eyes, and heart to the ways of selflessness and compassion, then these Mahatma Gandhi quotes are perfect for you.

Gandhi is a man that needs no introduction. A man that changed a nation and changed the world with his compassion, vision, tolerance, and patience. Mahatma Gandhi is an undying reminder of how one person can inspire a community, a nation, and the world.

Gandhi stood for peace, equality and non-violent protest and was even an inspiration for Martin Luther King, Jr. Gandhi is proof that one man can make massive changes, inspire a world and preserve their character throughout the journey.

Born on 2nd October 1869, in North West India, Gandhi was an activist, lawyer, politician, and writer. His upbringing was infused with the Jain pacifist teachings of mutual tolerance, non-injury to living beings and vegetarianism. He was assassinated on 30 January 1948, when he was 78 years old.

First, let’s look at some life lessons from Gandhi, the quotes come after.

Gandhi felt that we shouldn’t be tempted by glamorous lifestyles and that the most meaningful lives are simple and purposeful. Gandhi believed that when life is minimal, we can effectively focus on self-improvement.

Gandhi believed that we should focus more on positive impact and kindness, instead of personal achievement and personal gain. He believed everyone can do small things to improve the life of their neighbors.

Gandhi led by example and refused to dress any other way than what he thought was right for him and his mission. He encouraged other people to do the same thing. Be who you are at all costs.

Before we can change the world, we must change ourselves. Gandhi believed that before we even consider changing the world, we commit ourselves to personal improvement. Only then, we will know, understand and appreciate what it takes to make meaningful change.

5. The Mind Will Always Be Stronger Than Your Body

Gandhi believed that the person with the strongest mind wins. The person who can control their emotions, their fear, their desire for revenge and violence, will win every single time. Gandhi challenged ALL people to develop their courage and compassion during times of battle.

1. “You yourself, as much as anybody in the entire universe, deserve your love and affection.” – Mahatma Gandhi 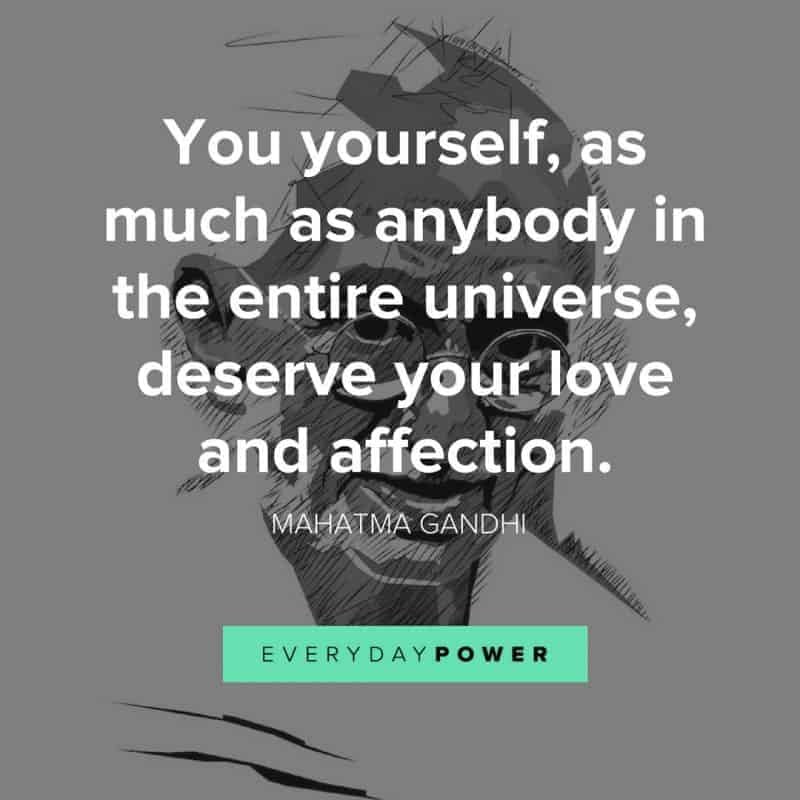 2. “There is more to life than simply increasing its speed.” – Mahatma Gandhi 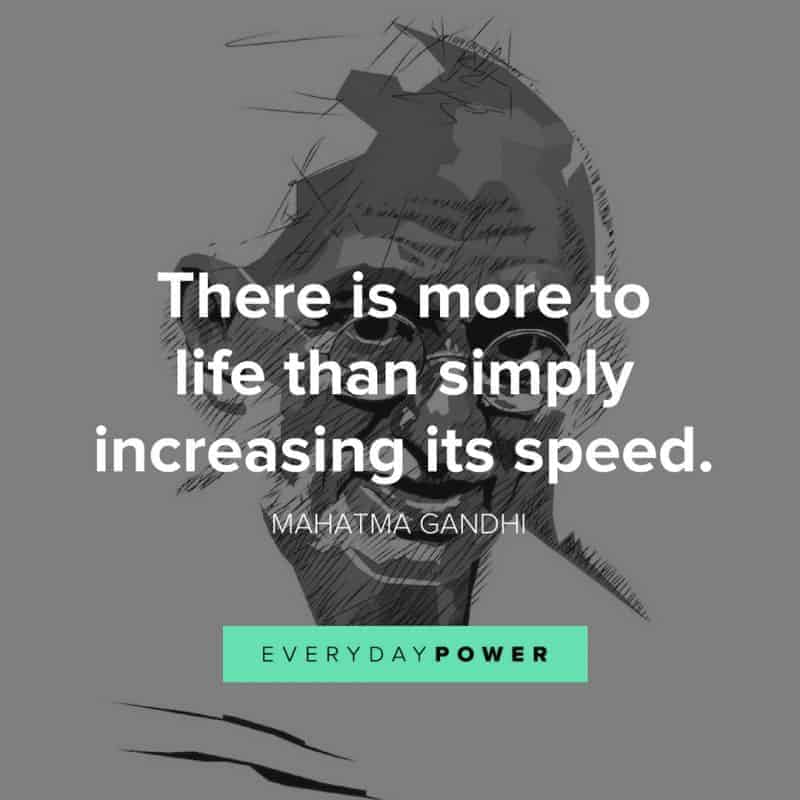 3. “Faith is not something to grasp, it is a state to grow into.” – Mahatma Gandhi 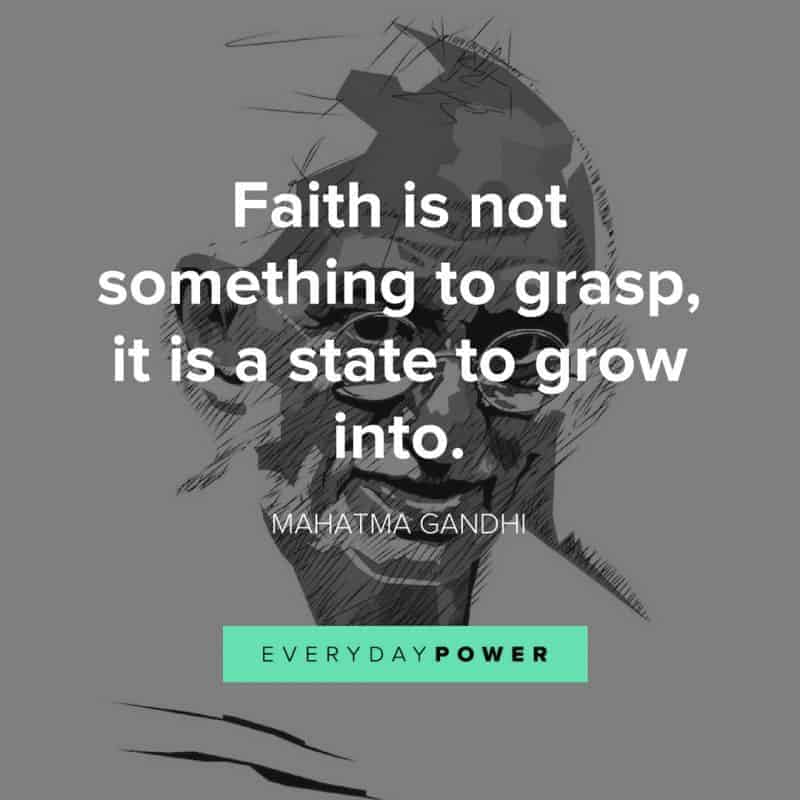 Also check out these wise Osho quotes on love, mindfulness, and more.

4. “The weak can never forgive. Forgiveness is the attribute of the strong.” – Mahatma Gandhi 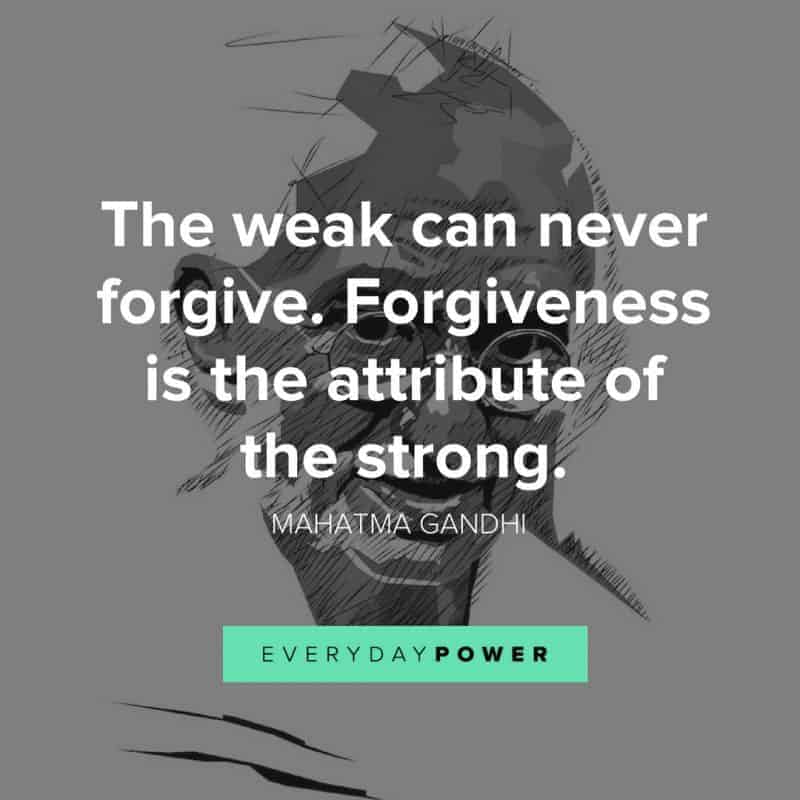 5. “Happiness is when what you think, what you say, and what you do are in harmony.” – Mahatma Gandhi 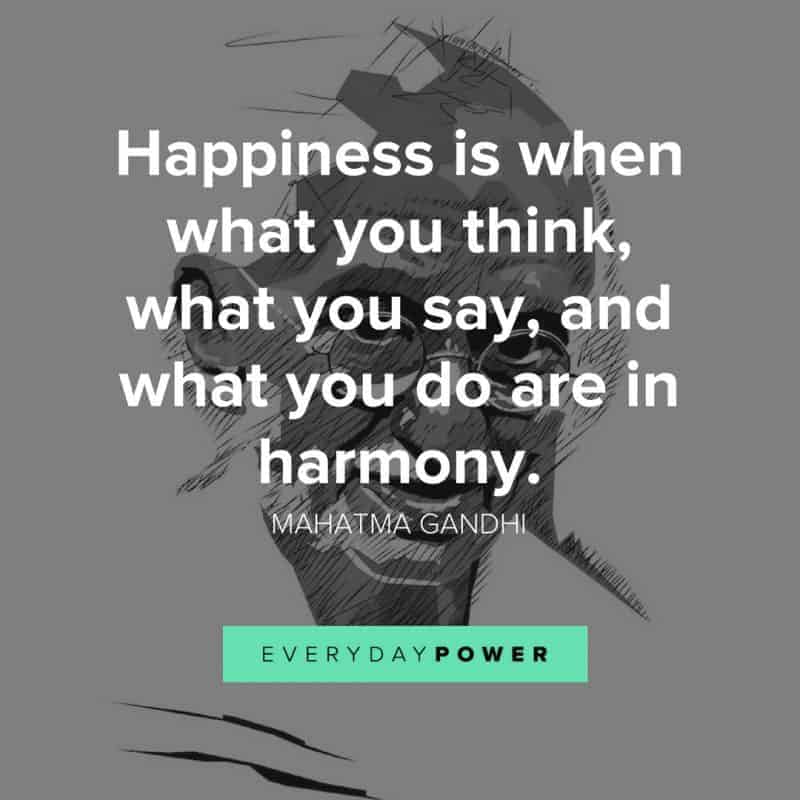 6. “Be the change that you wish to see in the world.” –Mahatma Gandhi 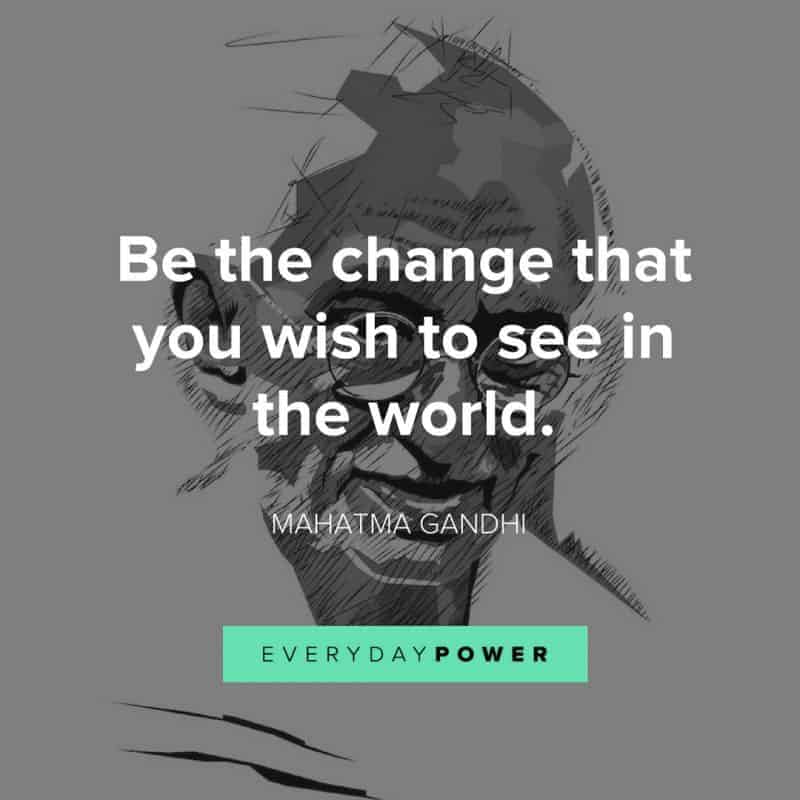 7. “In a gentle way, you can shake the world.”- Mahatma Gandhi 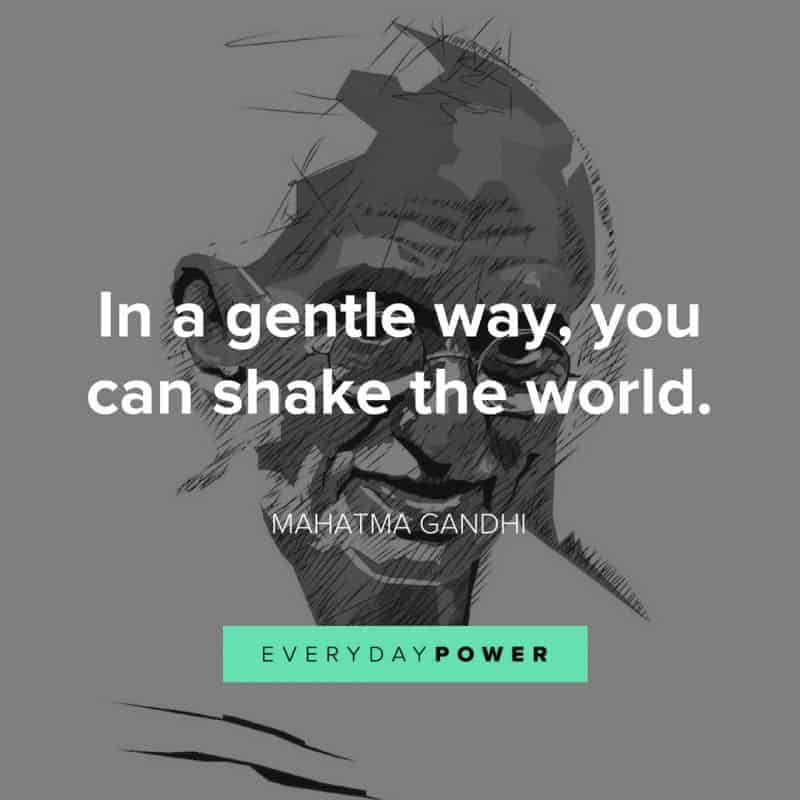 8. “There goes my people. I must follow them, for I am their leader.” – Mahatma Gandhi 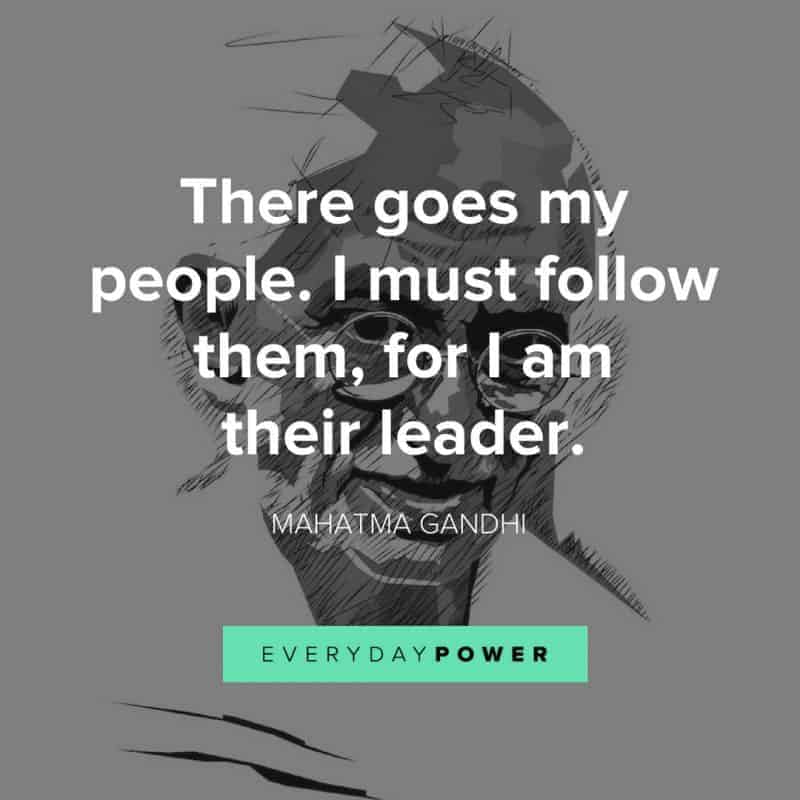 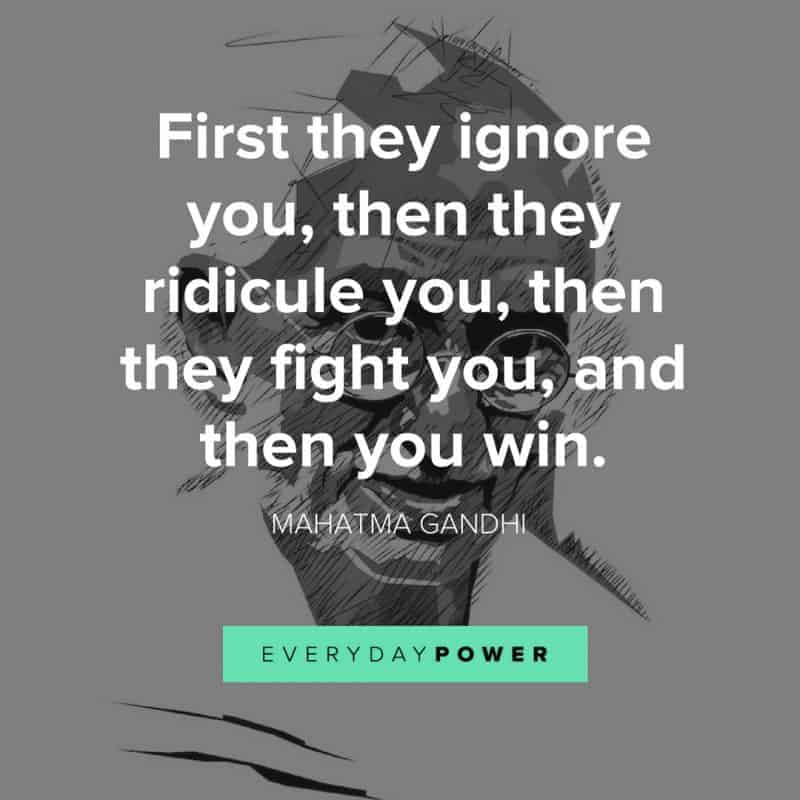 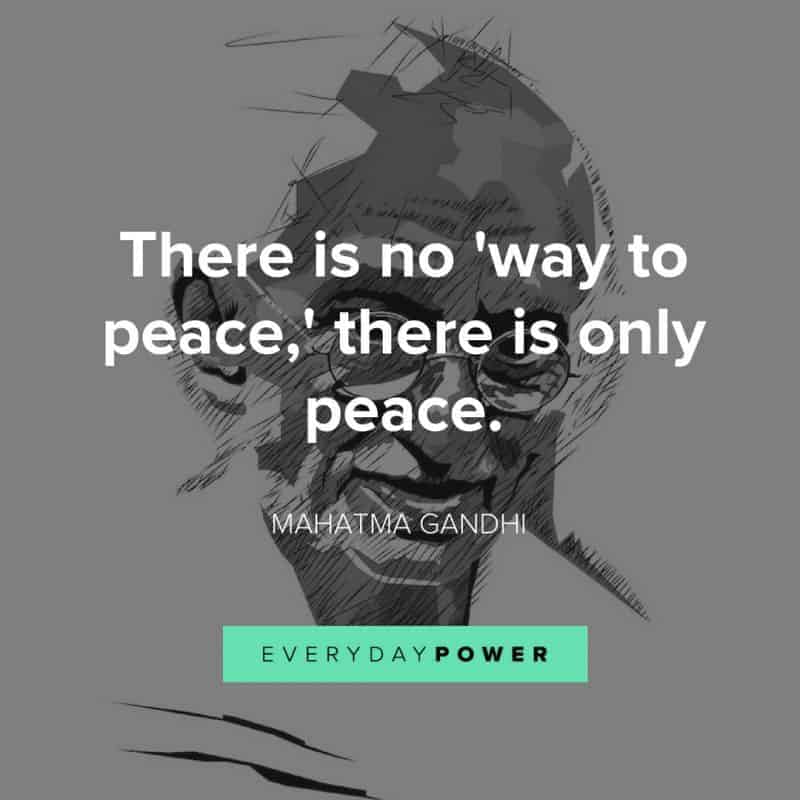 11. “Poverty is the worst form of violence.” – Mahatma Gandhi

14. “My imperfections and failures are as much a blessing from God as my successes and my talents and I lay them both at his feet.” – Mahatma Gandhi

15. “I first learned the concepts of non-violence in my marriage.”- Mahatma Gandhi

16. “There is no school equal to a decent home and no teacher equal to a virtuous parent.”- Mahatma Gandhi

17. “Don’t talk about it. The rose doesn’t have to propagate its perfume. It just gives it forth, and people are drawn to it. Live it, and people will come to see the source of your power.”- Mahatma Gandhi

18. “A small body of determined spirits fired by an unquenchable faith in their mission can alter the course of history.”- Mahatma Gandhi

19. “You must not lose faith in humanity. Humanity is like an ocean; if a few drops of the ocean are dirty, the ocean does not become dirty.”- Mahatma Gandhi

20. “You can chain me, you can torture me, you can even destroy this body, but you will never imprison my mind.”- Mahatma Gandhi

21. “If I had no sense of humor, I would long ago have committed suicide.”- Mahatma Gandhi

Quotes by Gandhi  about suffering

22. “Nobody can hurt me without my permission.”- Mahatma Gandhi

23. “I will not let anyone walk through my mind with their dirty feet.”- Mahatma Gandhi

24. “The best way to find yourself is to lose yourself in the service of others.”- Mahatma Gandhi
If you’re enjoying these quotes, make sure to read our collection of quotes about service about the power of serving others.

26. “If we are to reach real peace in the world, we shall have to begin with the children.”- Mahatma Gandhi

Quotes of Mahatma Gandhi about faith

27. “Earth provides enough to satisfy every man’s needs, but not every man’s greed.”- Mahatma Gandhi

28. “To believe in something, and not to live it, is dishonest.”- Mahatma Gandhi

29. “There are people in the world so hungry, that God cannot appear to them except in the form of bread.”- Mahatma Gandhi

30. “Whatever you do will be insignificant, but it is very important that you do it.”

32. “It’s the action, not the fruit of the action, that’s important. You have to do the right thing. It may not be in your power, may not be in your time, that there’ll be any fruit. But that doesn’t mean you stop doing the right thing. You may never know what results come from your action. But if you do nothing, there will be no result.”- Mahatma Gandhi

33. “When I despair, I remember that all through history the way of truth and love have always won. There have been tyrants and murderers, and for a time, they can seem invincible, but in the end, they always fall. Think of it–always.”- Mahatma Gandhi

34. “I came to the conclusion long ago that all religions were true and also that all had some error in them, and while I hold by my own religion, I should hold other religions as dear as Hinduism. So we can only pray, if we were Hindus, not that a Christian should become a Hindu; but our innermost prayer should be that a Hindu should become a better Hindu, a Muslim a better Muslim, and a Christian a better Christian.”- Mahatma Gandhi

35. “I must say that, beyond occasionally exposing me to laughter, my constitutional shyness has been no dis-advantage whatever. In fact,I can see that on the contrary, it has been all to my advantage. My hesitancy in speech, which was once an annoyance, is now a pleasure. Its greatest benefit has been that it has taught me the economy of words.

I have naturally formed the habit of restraining my thoughts. And I can now give myself the certificate that a thoughtless word hardly ever escapes my tongue or pen. I do not recollect ever having had to regret anything in my speech or writing. I have thus been spared many a mishap and waste of time. Experience has taught me that silence is part of the spiritual discipline of a votary of truth. Proneness to exaggerate, to suppress or modify the truth, wittingly or unwittingly, is a natural weakness of man, and silence is necessary in order to surmount it.

A man of few words will rarely be thoughtless in his speech; he will measure every word. We find so many people impatient to talk. There is no chairman of a meeting who is not pestered with notes for permission to speak. And whenever the permission is given the speaker generally exceeds the time-limit, asks for more time, and keeps on talking without permission. All this talking can hardly be said to be of any benefit to the world. It is so much waste of time. My shyness has been in reality my shield and buckler. It has allowed me to grow. It has helped me in my discernment of truth.” – Mahatma Gandhi

37. A coward is incapable of exhibiting love; it is the prerogative of the brave. – Mahatma Gandhi

38. The good man is the friend of all living things. – Mahatma Gandhi

39. “Relationships are based on four principles: respect, understanding, acceptance and appreciation.” – Mahatma Gandhi

40. “There is more to life than simply increasing its speed.” – Mahatma Gandhi

41. “What we are doing to the forests of the world is but a mirror refection of what we are doing to ourselves and to one another.” – Mahatma Gandhi
If you’re enjoying these quotes, you’ll love our collection of mirror quotes that will change your perception.

42. “Our greatest ability as humans is not to change the world; but to change ourselves.” – Mahatma Gandhi

43. “Speak only if it improves upon the silence.” – Mahatma Gandhi

44. “The difference between what we do and what we are capable of doing would suffice to solve most of the world’s problem.” – Mahatma Gandhi

45. Man becomes great exactly in the degree in which he works for the welfare of his fellow-men. – Mahatma Gandhi

46. “It is health that is real wealth and not pieces of gold and silver.” – Mahatma Gandhi

47. “Those who know how to think need no teachers.” – Mahatma Gandhi

48. To give pleasure to a single heart by a single act is better than a thousand heads bowing in prayer. – Mahatma Gandhi

49. “Strength does not come from physical capacity, it comes from indomitable will.” – Mahatma Gandhi

50. “If we want to reach real peace in this world, we should start educating children.” – Mahatma Gandhi

51. “A small group of determined and like-minded people can change the course of history.” – Mahatma Gandhi

52. “There is no need of a teacher for those who know how to think.” –Mahatma Gandhi

54. “Champions are made from something they have deep inside of them – a desire, a dream, a vison.” – Mahatma Gandhi

56. “Whenever you are confronted with an opponent. Conquer him with love.” – Mahatma Gandhi

58. “Imperfect men have no right to judge other imperfect men.” – Mahatma Gandhi

59. “The golden rule of conduct is mutual toleration, seeing that we will never all think alike and we shall see Truth in fragment and from different angles of vision.” – Mahatma Gandhi

Have you seen these empathy quotes to help you understand and share the feelings of others?

62. “The day the power of love overrules the love of power, the world will know peace.” – Mahatma Gandhi

63. “Love is the strongest force the world possesses and yet it is the humblest imaginable.” – Mahatma Gandhi

64. “Each one has to find his peace from within. And peace to be real must be unaffected by outside circumstances.” – Mahatma Gandhi

65. “Live simply so that others may simply live.” – Mahatma Gandhi

66. “Peace between countries must rest on the solid foundation of love between individuals.” – Mahatma Gandhi

68. “Forgive and forget, but never forget to forgive. You may find a happier heart is the key to a happier life.” – Gandhi, Mahatma

69. “We must look the world in the face with calm and clear eyes even though the eyes of the world are bloodshot to-day.” – Mahatma Gandhi

70. “To lose patience is to lose the battle.” – Mahatma Gandhi

Which Mahatma Gandhi quotes were your favorite?

As you can see from these quotes, Gandhi was big on compassion, vision, tolerance, and patience. His words remind us that we can inspire the world and make massive changes in life.

We live in a world where there’s a lot of violence and people take life for granted.

Hopefully, these Mahatma Gandhi quotes will inspire you to preserve your character and live your best life.