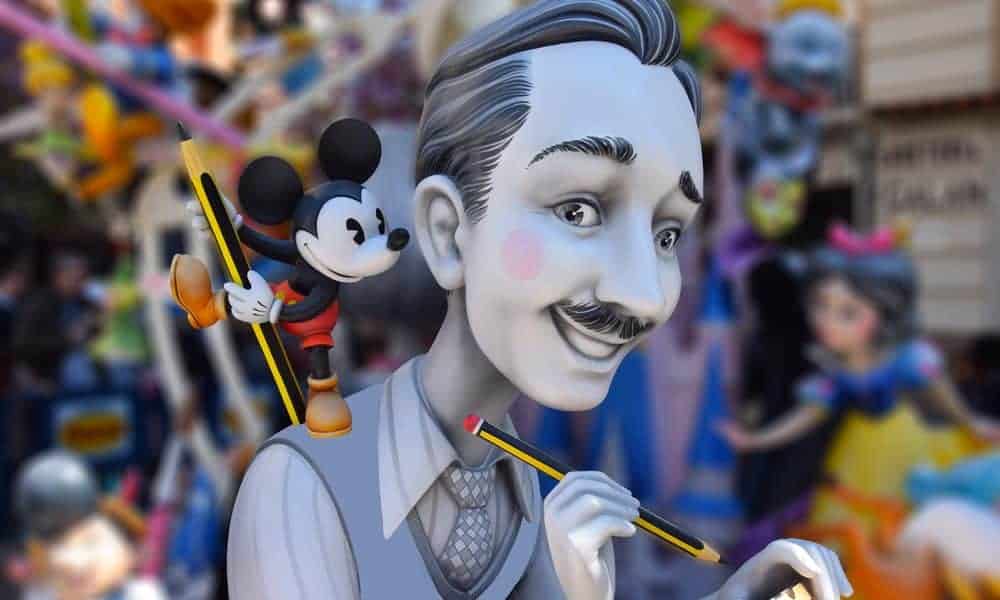 Our latest collection of Walt Disney quotes that are full of valuable life lessons.

Walt Disney had to overcome extreme resistance and rejection to get Disney Films off the ground. Born in Chicago on December 5, 1901, he is widely regarded as the pioneer of the American animation industry. He died of circulatory collapse caused by lung cancer on December 15, 1966.

These Walt Disney quotes reflect many of the values and principles displayed in his films.

Regarded as one of the greatest minds in the entertainment industry here a few lessons we can learn from the legendary Walt Disney.

1. Don’t be afraid to do what you love

The entire Disney enterprise started with Walt’s love of drawing. He become the famous voice of Mickey mouse and went on to create an empire.

Needless to say, people thought he was crazy with delusions of grandeur. What Walt did takes courage and persistence.

He taught us not to settle for jobs that will crush our dreams or give in to opinions that shrink us. Do what you love.

2. Become a student with the goal of becoming a master

Walt Disney was known for his tireless work ethic and extreme focus on the details. He never tried to just “get through it”.

He was dedicated to mastering his craft and truly becoming the best that he could be.

3. Give to others before you give to yourself

Walt Disney believed people should be generous and compassionate.

The original Disney Land was for people who wanted to experience happiness, love and fun with no distraction from the outside world.

As soon as you step onto any Disney Land Resort you can tell it’s been designed to bring out your inner child no matter your age.

Below is our collection of inspirational, wise, and thought-provoking Walt Disney quotes and sayings, collected from a variety of sources over the years.

2. “The more you like yourself, the less you are like anyone else, which makes you unique.” – Walt Disney 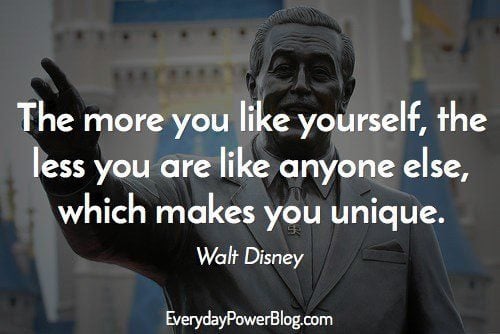 Walt Disney Quotes that will inspire you to keep moving forward 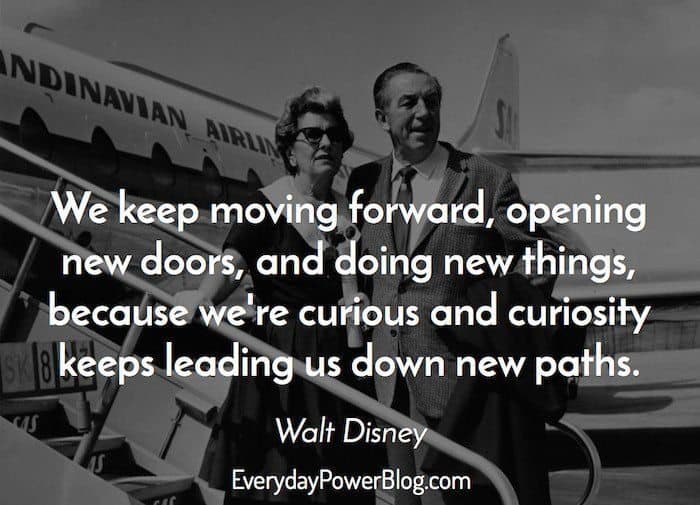 4. “All our dreams can come true, if we have the courage to pursue them.” – Walt Disney 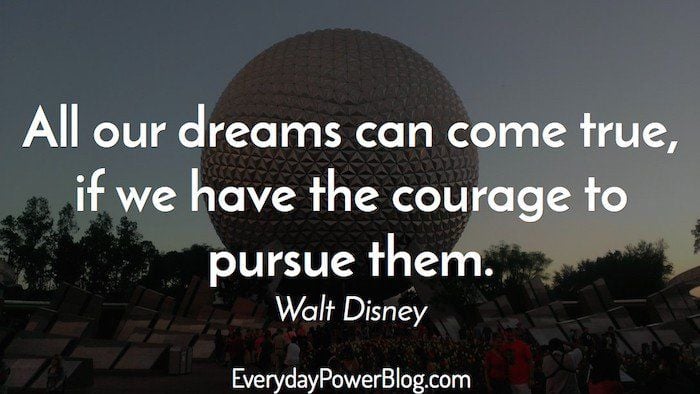 5. “The way to get started is to quit talking and begin doing.” – Walt Disney 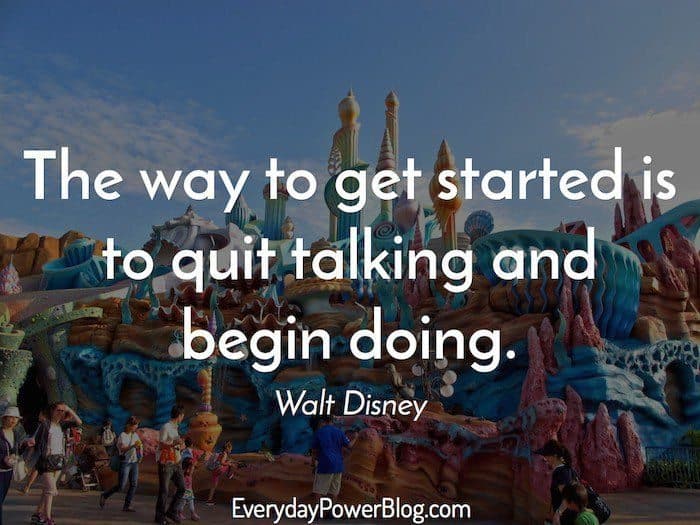 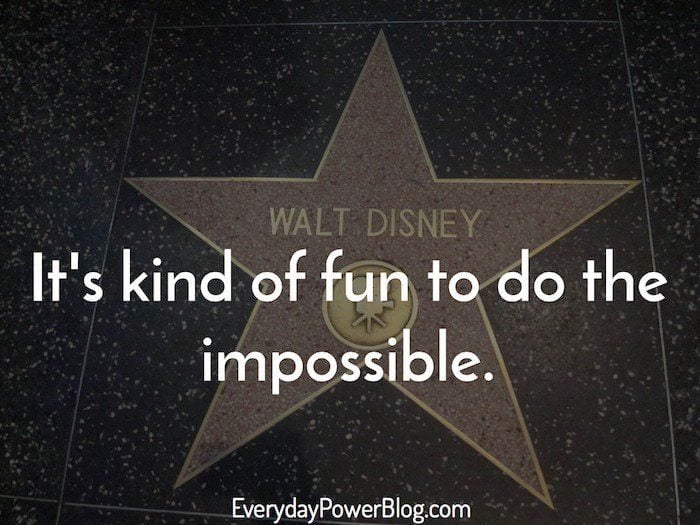 Walt Disney Quotes on believing in yourself

7. “When you believe in a thing, believe in it all the way, implicitly and unquestionable.” – Walt Disney 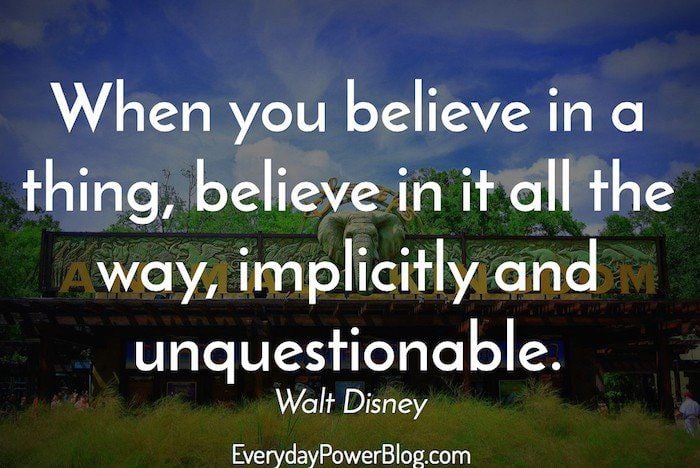 8. “Times and conditions change so rapidly that we must keep our aim constantly focused on the future.” – Walt Disney

9. “When you’re curious, you find lots of interesting things to do.” – Walt Disney

10. “I always like to look on the optimistic side of life, but I am realistic enough to know that life is a complex matter.” – Walt Disney

11. “Of all of our inventions for mass communication, pictures still speak the most universally understood language.” – Walt Disney

12. “You may not realize it when it happens, but a kick in the teeth may be the best thing in the world for you.” – Walt Disney

13. “All the adversity I’ve had in my life, all my troubles and obstacles, have strengthened me… You may not realize it when it happens, but a kick in the teeth may be the best thing in the world for you.” – Walt Disney

14. “A man should never neglect his family for business.” – Walt Disney

15. “You can design and create, and build the most wonderful place in the world. But it takes people to make the dream a reality.” – Walt Disney

16. “I have been up against tough competition all my life. I wouldn’t know how to get along without it.” – Walt Disney

17. “There is more treasure in books than in all the pirate’s loot on Treasure Island.” – Walt Disney

18. “Our heritage and ideals, our code and standards – the things we live by and teach our children – are preserved or diminished by how freely we exchange ideas and feelings.” – Walt Disney

19. “Disneyland will never be completed. It will continue to grow as long as there is imagination left in the world.” – Walt Disney
If you’re enjoying these quotes, make sure to check out our collection of imagination quotes that will inspire you to unleash the untapped treasures in your mind.

20. “I would rather entertain and hope that people learned something than educate people and hope they were entertained.” – Walt Disney

22. “Disneyland is a work of love. We didn’t go into Disneyland just with the idea of making money.” – Walt Disney

24. “I do not like to repeat successes, I like to go on to other things.” – Walt Disney

26. “Of all the things I’ve done, the most vital is coordinating those who work with me and aiming their efforts at a certain goal.” – Walt Disney

28. “Whenever I go on a ride, I’m always thinking of what’s wrong with the thing and how it can be improved.” – Walt Disney

29. “I’d say it’s been my biggest problem all my life… it’s money. It takes a lot of money to make these dreams come true.” – Walt Disney

30. “We did it [Disneyland], in the knowledge that most of the people I talked to thought it would be a financial disaster – closed and forgotten within the first year.” – Walt Disney

31. “We are not trying to entertain the critics. I’ll take my chances with the public.” – Walt Disney

32. “I am not influenced by the techniques or fashions of any other motion picture company.” – Walt Disney

33. “I only hope that we never lose sight of one thing that it all started with – a mouse.” – Walt Disney

Walt Disney Quotes to help you make your dreams a reality

34. “I suppose my formula might be: dream, diversify and never miss an angle.”  – Walt Disney

35. “I could never convince the financiers that Disneyland was feasible, because dreams offer too little collateral.” – Walt Disney

36. “All right. I’m corny. But I think there’s just about a-hundred-and-forty-million people in this country that are just as corny as I am.”  – Walt Disney

37. “I do not make films primarily for children. I make them for the child in all of us, whether we be six or sixty.” – Walt Disney

38. “All you’ve got to do is own up to your ignorance honestly, and you’ll find people who are eager to fill your head with information.” – Walt Disney

39. “I am interested in entertaining people, in bringing pleasure, particularly laughter, to others, rather than being concerned with “expressing” myself with obscure creative impressions.” – Walt Disney

40. “It’s a mistake not to give people a chance to learn to depend on themselves while they are young.” – Walt Disney

41. “Around here, however, we don’t look backwards for very long. We keep moving forward, opening up new doors and doing new things, because we’re curious and curiosity keeps leading us down new paths.” – Walt Disney

42. “It’s no secret that we were sticking just about every nickel we had on the chance that people would really be interested in something totally new and unique in the field of entertainment.” – Walt Disney

43. “Courage is the main quality of leadership, in my opinion, no matter where it is exercised. Usually it implies some risk especially in new undertakings. Courage to initiate something and to keep it going, pioneering and adventurous spirit to blaze new ways, often, in our land of opportunity.” – Walt Disney

44. “I have long felt that the way to keep children out of trouble is to keep them interested in things. Lecturing to children is no answer to delinquency. Preaching won’t keep youngsters out of trouble, but keeping their minds occupied will.” – Walt Disney

45. “Do a good job. You don’t have to worry about the money; it will take care of itself. Just do your best work then try to trump it.” – Walt Disney

46. “A person should set his goals as early as he can and devote all his energy and talent to getting there. With enough effort, he may achieve it. Or he may find something that is even more rewarding. But in the end, no matter what the outcome, he will know he has been alive.” – Walt Disney

47. “Faith I have, in myself, in humanity, in the worthwhileness of the pursuits in entertainment for the masses. But wide awake, not blind faith, moves me. My operations are based on experience, thoughtful observation and warm fellowship with my neighbors at home and around the world.” – Walt Disney

48. “Somehow, I can’t believe that there are any heights that can’t be scaled by a man who knows the secret of making dreams come true. The special secret it seems to me is summarized in four C’s. They are Curiosity, Courage, Confidence and Constancy. And the greatest of all is Confidence. When you believe in a thing, believe in it all the way, implicitly and unquestionably.”  – Walt Disney

49. “The American child is a highly intelligent human being; characteristically sensitive, humorous, open-minded, eager to learn, has a strong sense of excitement, energy, and healthy curiosity about the world in which he lives. Lucky indeed is the grown-up who manages to carry these same characteristics into adult life. It usually makes for a happy and successful individual.” – Walt Disney

50. “To me, today, at age sixty-one, all prayer, by the humble or highly placed, has one thing in common: supplication for strength and inspiration to carry on the best human impulses which should bind us together for a better world.” – Walt Disney

51. “The era we are living in today is a dream of coming true.” – Walt Disney

52. “The difference between winning and losing is most often not quitting.” – Walt Disney

53. “Your dead if you aim only for kids. Adults are only kids grown up, anyway.” – Walt Disney

54. “Everyone falls down. Getting back up is how you learn how to walk.” – Walt Disney

55. “I only hope that we don’t lose sight of one thing – that it was all started by a mouse.” – Walt Disney

56. “People often ask me if I know the secret of success and if I could tell others how to make their dreams come true. My answer is, you do it by working.” – Walt Disney

57. “All your dreams can come true if you have the courage to pursue them” – Walt Disney

58. “I try to build a full personality for each of our cartoon characters – to make them personalities.” – Walt Disney

59. “Why worry? If you’ve done the very best you can, worrying won’t make it any better.” – Walt Disney

60. “When people laugh at Mickey Mouse, it’s because he’s so human; and that is the secret of his popularity.” – Walt Disney

62. “Laughter is timeless. Imagination has no age. And dreams are forever.” – Walt Disney

64. “Here you leave today and enter the world of yesterday, tomorrow, and fantasy.” – Walt Disney

66. “That’s the real trouble with the world, too many people grow up. They forget.” – Walt Disney

67. “Whatever we accomplish is due to the combined effort.” – Walt Disney

68. “If you believe in something, believe in it all the way.” – Walt Disney

70. “To the youngsters of today, I say believe in the future, the world is getting better; there still is plenty of opportunity.” – Walt Disney

What other Walt Disney quotes would you add to the list?

Walt Disney is arguably one of the greatest minds in the entertainment industry. He established himself as a genuine part of the American entertainment history. He holds the record for the most Academy Awards. He won 22 Oscars from 59 nominations, was presented with two Golden Globe Special Achievement Awards as well as an Emmy Award.

Disney had a warm and outgoing public persona and had high expectations and high standards of those with whom he worked with. Hopefully, you’ve learned a few lessons from these Walt Disney quotes.

What other Walt Disney quotes would you add to the list? Feel free to share with us in the comment section below. We would love to hear all about it.