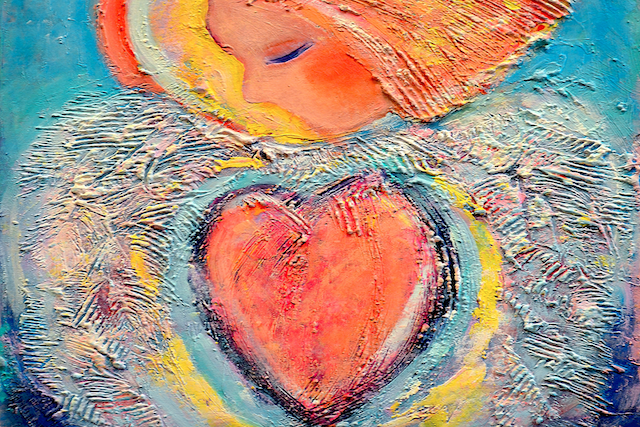 “I hope you find love, but more importantly, I hope you’re strong enough to walk away from what love isn’t.” ~Tiffany Tomiko

When I was in my early thirties, I briefly dated someone right after my divorce.

It was one of those fast and furious things that had no label and left me wondering if I made most of it up in my head.

It wasn’t the first time and it wouldn’t be the last. How many times had I ended up feeling rejected and abandoned? I was trying so hard to impress a partner, but no matter what I did, I only seemed to push them away.

Tearfully, I shared my pain with a spiritual advisor and psychic and asked for her guidance.

She suggested I consider the joy that might come out of pleasurable and easeful partnerships. She asked me, “Briana, why don’t you shift your energy and focus to that aim?”

But it wasn’t so easy. I was attached and hung up on this guy. Why didn’t he love me like I loved him?

Another thought popped into my head, which I hadn’t realized was there before.

Before I could voice it out loud, she said, “Oooohhhh, Briana. I can hear you already. You think if you’re not in pain, then your art and other creative works won’t be any good.”

I burst out into another round of sobs.

Because it was true. I did think that way.

I thought I performed at my best when I was at my most miserable, and if you took away my misery, I would not only be common, but worse yet… mediocre. I would truly be the bad artist I always thought I was.

Every aspect of creative expression would become cliched, trite, and uninteresting. There wouldn’t be anything special about me.

And so I would become unlovable.

The drama proved my worth, one way or the other; the drama of performing well enough to earn love.

It wasn’t until four years after that conversation that I finally stopped clinging to my pain.

Because I realized that pain didn’t make something (love) more authentic—it just made it more difficult.

That’s just not true. There is a far better way to build relationships, and that’s what I would previously have called “boring” and “too easy,” but actually is about respecting your own, authentic self and opening up to love.

Here’s what I’ve learned about letting go of feeling unworthy of love and finally learning how to receive it.

Like me, you might believe that to attract a lover and be worthy of love, you have to pretend to be a perfect partner, through things like making them feel wanted and desired, looking beautiful, and being funny, witty, smart, and interesting all the time.

All of these tactics might very well appeal to a potential partner. Certainly, it might make them interested enough to get to know you better, and maybe even date you for a while.

But none of that means it will soften their heart and make them fall into a soul-shaking relationship with you.

In fact, while I used to think that I needed to pretend that I was something I wasn’t so that I’d be worthy of love, I just kept deterring the other person.

Because while the glitz and glamour are appealing, it also, on a deeper level, left me completely unavailable.

In the same way, you are pushing away a partner by performing all the time.

You see, your partner is going to feel as if they have to perform just as well, and while that may be exciting in the beginning, unless the mask comes off, it also gets exhausting very quickly.

A loving partner will be less concerned about how many degrees you hold or how much you make at your job and more concerned that you’re passionate about what you’re doing.

A loving partner doesn’t care how many facts you can recite. They may enjoy your company if you’re a great conversationalist, but that won’t necessarily make them feel something for you.

The way to a partner’s heart is to make them feel safe enough to explore and experience their own authentic self.

You do that by feeling safe enough to express yourself—without someone else’s permission.

Because if you don’t communicate that you’re comfortable in your own skin, this partner won’t feel comfortable or safe opening up to you, either.

And if a person can’t open up to you, warts and all, they can’t fall in love with you. It’s as simple as that.

When you put on a performance instead of taking off your mask, you unconsciously communicate a fantasy of reality, because that feels safer than vulnerability. And then you energetically and non-verbally tell your partner that you can’t handle their vulnerability, either.

And isn’t it freeing? You, in all your vulnerability, are the person they want and need in order to be their own, true self.

2. Get in touch with your own feelings.

What many of us do when we feel unworthy of love is numb our emotions and pretend we feel something other than we actually do.

Guess what happens if you’re acting one way, while feeling something else? That’s right, drama.

If they think you’re angry, but they are not sure, because you’re trying hard to plaster a smile on your face, say, “I’m fine,” and stuff it down, you’re not really fooling anyone, just confusing them.

Your energy and your verbal expressions are going to contradict one another, and that is the seed of dramatic conflict.

And this type of drama is so annoying because you are effectively keeping a partner at bay, and refusing to connect with them, for fear that they wouldn’t like the “real” you.

But because they can’t access “the real” you, there’s no real glue holding them there, and they wind up leaving you anyway.

So show them what you feel, while letting go of the fear that they will reject you for doing so. By reconnecting with your emotions, you show up as your authentic self and make it safe for them to love you.

3. Be open to meeting someone with the same level of consciousness.

Around the end of August last year, I started dating someone. He wasn’t originally what I would have imagined for myself, but he turned out to be exactly what I need.

Right from the get-go, things went really well; we talked for hours on end, and I felt an instant connection.

There were butterflies, yes, but not the kind of gut-twisting, obsessive sensations I have had in the past, which usually means I should run.

This was more like, “Ah, you fit nicely… and kinda feel like home. What took you so long?”

He shows up with fresh flowers, texts me “good morning,” and sees the humor in situations like that time my cat got jealous and bit him when he tried to kiss me.

While before, I would have instantly dismissed this type of relationship as being too easy (and the lack of drama would have shown me that it wasn’t real love), I now see it for what it is:

A relationship in which partners join together from a place of inspiration, as opposed to a fear-based need to be filled up with the other.

This is a partner who already has a higher level of consciousness and is looking for purposeful building. There’s no drama, there’s no chasing, and there are no games or acts.

This is the key to feeling worthy of and receiving love—finding a partner who is open to the same. The criterion for attracting such a partner, however, is that you are ready to meet them.

I wasn’t ready four years ago. It took me that long to go from believing that relationships had to be a rollercoaster of emotions to opening up to a loving partnership.

Ultimately, it’s about you finding your authentic self and realizing that this version of you (the real version) is so worthy of love and should be loved. That’s the premise for a relationship that, instead of being soul-sucking and anxiety-ridden, is the perfect space for self-growth and joy.

Briana MacWilliam has over fifteen years of clinical experience as a licensed and board-certified creative arts therapist, and is the Founder and Director of Briana MacWilliam Inc. She passionately serves insecurely attached adults who want to experience soul-deep intimacy in their romantic relationships. Want to know your own attachment style in relationships? Take the attachment styles quiz here!